Art and Migration: An Interview with Yuge Zhou

Yuge Zhou uses media art to both show and soothe the pain of migration. 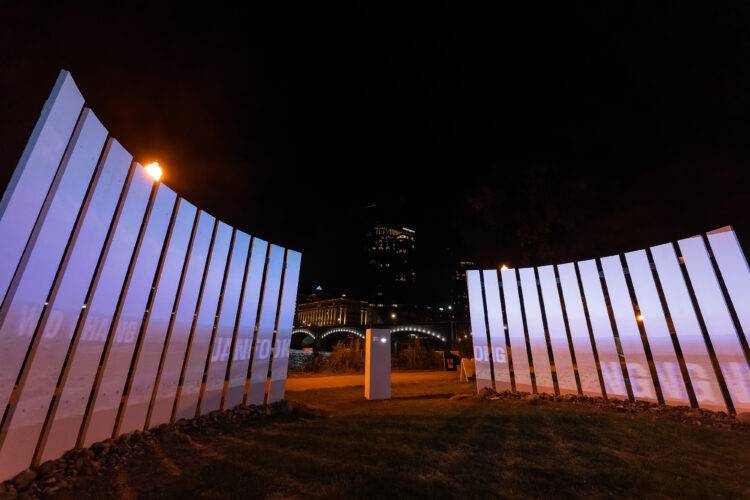 Yuge Zhou (MFA 2015) is a curator for 150 Media Stream and a practicing artist. With an M.S. from Syracuse University in computer engineering, in addition to her M.F.A. in Visual Communications from SAIC, Zhou started her artistic practice in video and installation arts. She focuses on the topics of natural and urban spaces, migration, and longing.

150 Media Stream is a set of pillars onto which images, videos, and animations are projected. Previous projections include works from Bisa Butler, the Joffrey Ballet, and Sara Lundy, to name a few.

Recently, Zhou’s own work “Project Unity: Ten Miles of Track in One Day,” made in collaboration with Hwa-Jeen Na, and which won the Juried Award in the installation category at ArtPrize 2021, was projected.

Project Unity is a three-channel projection showing typical American West landscapes filmed from a train window. Rolling like credits in a movie, the video contains recovered names of thousands of Chinese immigrant workers who built the western half of the Pacific Railway. Zhou says historical records rarely identified these workers. Their names, if recorded, were often anglicized. Creating a never-ending railroad, Zhou and Na convey the feeling of fragmented and disconnected natures of a common history.

I talked with Yuge in the lobby cafe of 150 N Riverside business center, with a good view of the 150 Media Stream installation. The business center is a glass skyscraper full of city developers, and the installation captures the essence of downtown art. A huge ‘fence’ of LED screens streaming contemporary video art, animations, and generative art for lobby visitors.

Lisa Korneichuk: I know that you have an engineering background. How did you switch from that area to art?

Yuge Zhou: Since I was a little girl I always had an artistic side. But I was also very good at mathematics and physics, and my family thought that it would be more practical to become an engineer. So I came to the US and got a Masters in computer science. But because it was a very new environment for me, I was very intrigued by the US and absorbed a lot of the everyday life of the Western culture. At some point, my friend gave me a camera so I started taking photos. And I fell in love with making art again.

As soon as I finished my degree, I built a portfolio and applied to the art school. I feel that I have an artistic and logical side of myself, so I want to do something that merges both of them. Most of the classes I took at SAIC were from the film, video, and new media departments. At that time I had no idea of what a media artist is, but I knew I wanted to bring technology into my art practice.

LK: In your art, you often work with urban landscape, architecture, city life. How did you choose this topic?

YG: In 2008, before I left Beijing, many new buildings appeared there for the Olympic Games, so I saw how the urban landscape of my city was transforming. When I came to the US, I was intrigued by what I saw. At that time, I felt like an outsider, I didn’t speak the language, so the only thing I could do was observe. So I watched people and architecture and started taking photos.

LK: People in your works are depicted from a distance as you observe them from above. What does this point of view mean to you?

YG: Sometimes I feel like a silent observer who watches people from a distance. There is always pleasure in watching people. In my works, I am playing with these roles of voyeur and walker. However, I filmed sunset and sunrise from two sides of the Pacific ocean from the protagonist’s role in my recent work (“when the East of the day meets the West of the night”). The idea was to express the personal gaze slowly glancing at the ocean. Both China and the US are my home, and there is an ocean apart. So to share the longing and melancholy, I chose the first-person position.

LK: How does migration generally affect your practice?

YG: I thought a lot about this during the pandemic. When I arrived here, I felt like an outsider, but gradually I found my ground here, and I felt like an insider. Still, there are moments when I feel like I am not welcomed here. It intensified during the pandemic when I was stuck in the US, and also Asian hate stuff happened. Sometimes I have an identity crisis, I don’t know if I am Chinese or American. When I call my parents and speak Chinese with them, they are like, “Oh, I see that your Chinese is getting worse.” I don’t know where I belong, I am in between, but that’s ok. It’s normal not to be either-or, not trying to be this or that. I like being where I am now. 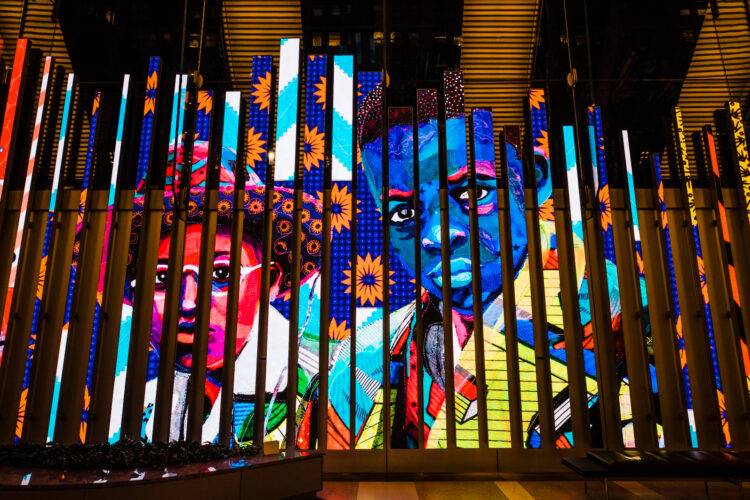 LK: As a curator in 150 Media Stream and an artist, how do you combine your curatorial work with your artistic practice? Or maybe your art makes curation easier for you?

YG: No, it doesn’t (laughing). My least favorite part of work is administrative stuff. Most of the time, I send emails. But first and foremost, I am an artist and going to be an artist for the rest of my life. The curation here is beneficial for me to grow, by working with artists, I also learn how others work because many of them are more established than me. But as a curator here, I also learn to talk to business people about art and get more funding for artists.

LK: How did the idea of 150 Media Stream appear?

YG: I was hired in 2015 when Riverside Investment already had the idea of the video wall. They wanted to do something artistic in the lobby of the building but didn’t know what exactly. It should have been something future-forward, something that can change all the time. So the architects from Goettsch Partners proposed a video wall. One of the reasons was to soften the sharp ground line [visible from the big glass wall in the lobby], so they wanted to put something in front of it. The screen shape was designed by Digital Kitchen. It is reminiscent of grass in the garden behind the building or the waves of the Chicago River. The screen works with columns in the lobby and is related to the nature around the building.

150 Media Stream was launched in 2017, featuring different artists’ works every month. Since the start of the pandemic, we slowed down.

LK: What is this building?

YG: This area [West Loop] is a prime location, one of the most expensive neighborhoods in Chicago. The tenants of the building are large international companies, including the Pritzker Organization, Hyatt Corporation, William Blair and Company, and a couple of other law and investment firms. It’s pretty business-oriented. What I really love about this installation is that it became a bridge between business and art community.

LK: So you were hired specifically for the curatorial position of the platform?

YG: I am a video artist, so I was invited to make content for the installation. Developers didn’t know what a curator was. I had no curatorial background either but I was intrigued by the installation. During the meeting, I suggested, ‘I can curate for you.’ So I invented this job for myself. 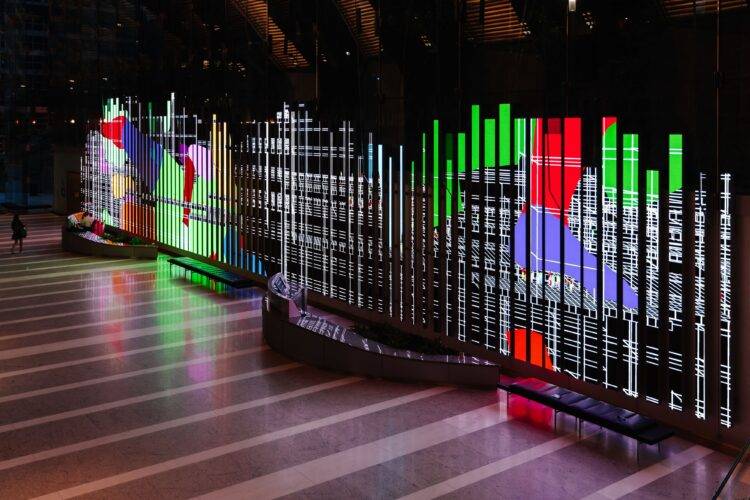 LK: Regarding your curatorial position in 150MediaStream, could you tell more about your transition from creating to curating?

YG: Creating and curating are not two separate categories for me. There is not a clear division between the two tasks. When I create, I also get ideas for curating and vice versa. I’m fortunate to have both feet in each of these worlds. I can step back and look at the artworks I create from a curatorial viewpoint, and at the same time, I can also look at the pieces I curated from an artist’ viewpoint and can better understand the creative decisions made in these works.

LK: Before you introduced the idea of curating the space, it was meant to be more for the internal decoration of the building.

YG: I have to give credit to the Riverside developers, because they were supportive of making it open to the public and maintaining the reputation of this as a legit art installation. There is no commercial dimension to it.

For me, it is not a decoration, it’s not a lobby art. It’s a cultural place. What I want to achieve in the end is that this medium can be appreciated by both art and non-art audiences, like business people, who can just enjoy it. But this is also a platform for an art audience.

LK: In this space, art encounters the business sphere; it is not an art space in the first place. Because of this, it should have some restraints or limitations. What are they?

YG: We can’t show something that is very ‘black and white.’ If the artists have a political agenda or a religious message, we tend not to show it. And the reason for that is that it’s a public space, we don’t want to tell people that this is what we believe. There are not many limitations in terms of what artists can do. We like works that push boundaries. We didn’t just hire a creative studio to do a bunch of screensavers because we want to make sure that artwork has a voice, and its voice is expressed through this platform.

LK: You said you abstain from exhibiting political or otherwise strong statements, but at the same time, want to endow the project with greater meaning. How do you balance those tasks?

YG: 150 Media Stream is a public art platform. We want to showcase artwork that can be appreciated on various levels by people from different backgrounds. It could be something as mild as just walking by the installation and catching a glimpse of the scale, color or other formal elements of the work, or it could also engage people on a deeper level for those who have decided to stop and look. We are not avoiding topics that might be considered to have more gravitas, but we also don’t want to promote just one political view. It’s important that the work we feature leaves the audience room for their own interpretation and imagination.

LK: What does art mean for you?

YG: When I was 21, I was on an airplane that took off to America for the first time, and I couldn’t stop crying and looking at the landscape shrinking behind me. I kept thinking about that moment of being scared and excited at the same time. When I do a project, I get the same feeling. I don’t know what’s going to happen, it can be a complete disaster, or it can be great, but I just love these exciting moments of adventure and the unknown.

Lisa Korneichuk (MANAJ 2023) is an art journalist and editor from Ukraine. Currently, she has over 40 open browser tabs.

A Walk Through an “Available City”