Caroline Picard (MFAW 2010) on starts and stops, living with a mountain, and ennui. 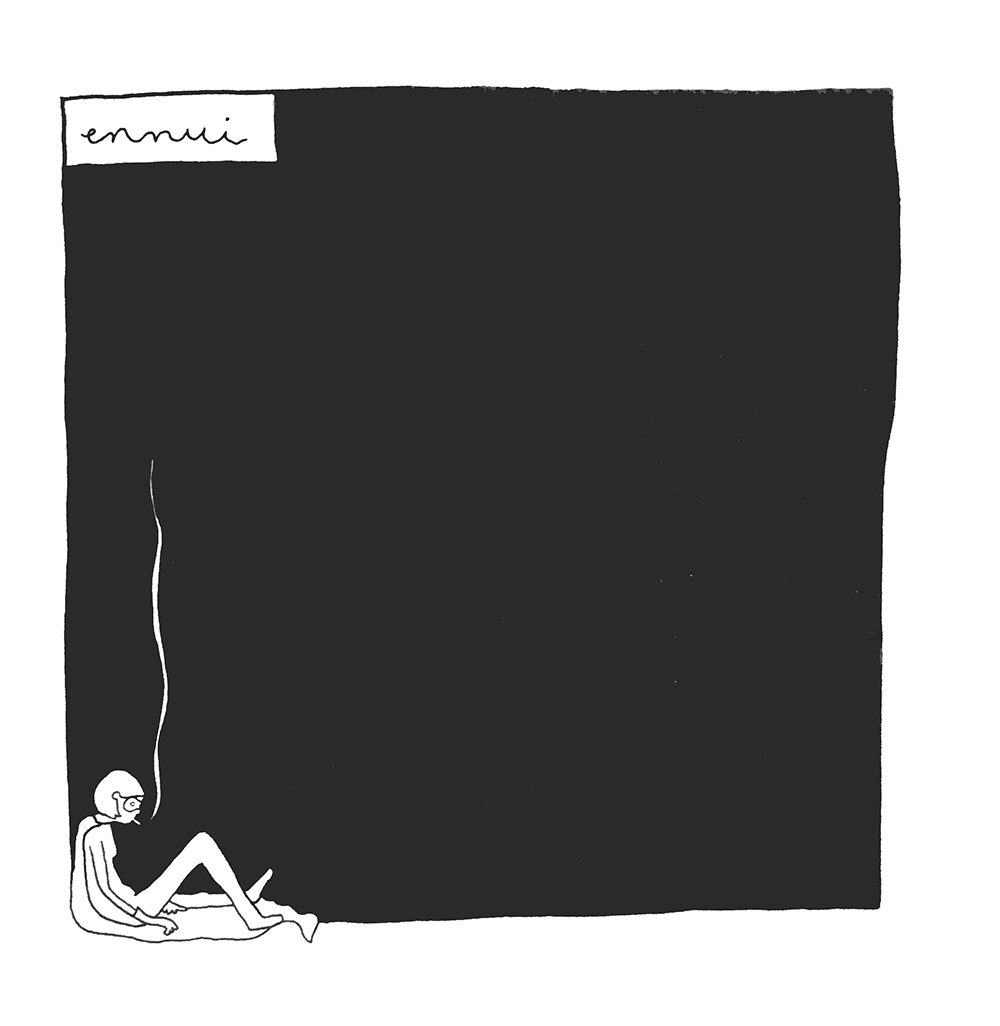 Page from “Chronicles of Fortune.”

A “porous studio practice” lets Caroline Picard (MFAW 2010) follow conversations and ideas to various ends. After moving to Chicago in 2004, Picard began taking classes through SAIC’s painting department. Within six months, she opened up an art space and paperback publishing house, later called Green Lantern Gallery and Press, out of her apartment in Wicker Park. Picard soon realized that running the art space was more affordable than pursuing a degree. She returned to SAIC for an MFA in writing only after several years of running the gallery and publishing space.

The way community builds from independent culture entices her. Having an “apartment gallery blurs the boundaries between public and private space.” Picard laughed, as this characterization sounded more “conceptually rigorous than it felt at the time” she says. “At the end of the day, I was running a loft apartment space where we were having parties all the time.” This low-fi filter worked in opposition to her inclination to make everything a metaphor because she inhabited an art gallery.

One Spring, one of the gallery’s exhibits featured a mountain. When the show ended, the difficulty of breaking down the mountain proved greater than living with it. For months, Picard found herself asking, “What does it mean that I’m living with a mountain?”

The mountain, combined with an exploding oven called “Univers” (no “e”), a persistent leak, plotting moths, and the Singer Sewing Shop on the street level of the apartment gallery were aspects of reality that served as fodder for her mini-comic, “Chronicles of Fortune.” Started in 2008, Picard would bring pen drawings on computer paper to Kinkos to create a master copy of each episode of Edith May and her alter ego Fortuna. The superhero-adjacent avatar Fortuna “could have killed death once and for all,” the book reads, “… except … she happens to be suffering from a terrible case of ennui.”

“Once the book came out,” Picard said, “I felt like this roommate left.” Fortuna no longer framed Picard’s experiences. Picard reflected that across very different projects, the main character ends up in a dark enclosed space. “You know how people talk about dating types of people? I discovered,” Picard mused, an “unconscious tendency to end up in the same situation through these avatar personalities.”

Picard is working on another graphic novel with Brideau. “It’s basically a very goofy time travel heist — space cat story.” She started it in 2010 but is still working on making the narrative cohesive since parts were made at very different times of her life. At any given moment her focus might have been on curation, nonfiction writing, publishing other artists, or separate comics. Picard’s projects span years, and she harbors a perennial worry that things will never be completed: “I like … puzzling over the questions that a particular fictive lens raises. Am I a writer if I don’t finish things?”

Picard, of course, has started and finished many endeavors. In 2014, she opened Sector 2337 — A bookstore, gallery, and performance space in Logan Park that also housed Green Lantern Press. For several years, Sector 2337 maintained public programming and exhibitions that worked to make “community, culture, and discourse easily accessible to Chicago.”

Picard now lives in Santa Fe, New Mexico. Prior to departing Chicago in 2019, she realized, “Whoa, I was in Chicago for a long time.” In Santa Fe, she primarily writes and makes comics. She still curates shows, but it is more like “an exhibition versus a whole season.”

Picard has always had difficulty “deciding ‘quote unquote’ what I am.” Any one thing was never an end, and at a certain point she “decided that was fine and kind of pleasant” she says. “Or, useful is a better word.”

Get to know more about Caroline Picard on her website, and check out her comic collections from Radiator Comics.