A look back at Daniel Craig’s stellar turn as 007. 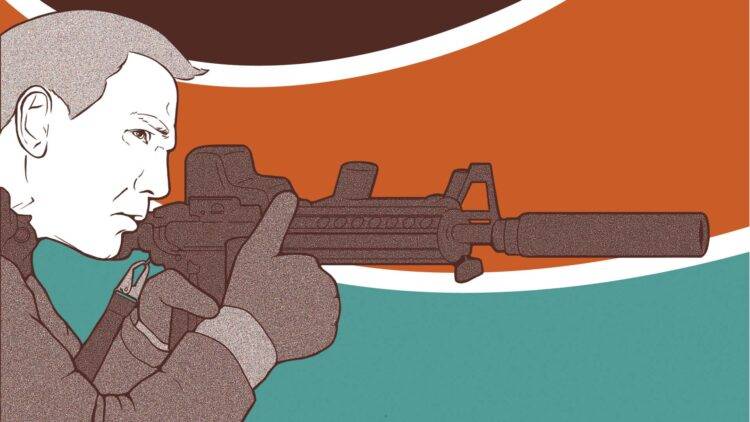 When I was growing up, my mother banned me from watching several things. Some of those things were cartoons, like the unnatural behemoth “Catdog,” or the perverse “Cow & Chicken.” These were things bad for my brain, things a little boy doesn’t need to be exposed to. There were movies my older sister could watch but I would have to leave the room for — “Moulin Rouge,” “Sixteen Candles,” and “Grease,” the latter of which my mother forgot about banning, when, last year, she hummed the tune to “Summer Lovin’” and was disappointed I could not recognize the song.

On that list of movies, there was a whole franchise, a whole character, a whole man, whose values were so reprehensible, unethical, and inappropriate for an 8-year-old, that even at sleepovers, I would leave the room if he was onscreen.

James Bond, the misogynist, the philanderer, the alcoholic.

In the last two weeks, I’ve ingested all of Daniel Craig’s Bond movies. Because I’ve seen far worse than Catdog. I’m an adult, I can watch James Bond movies.

When Craig was cast as Bond, people were not happy. There was a time where the worst thing Bond could be was blonde and only five foot ten. God forbid they ever consider casting a Black man or a woman. Bond was something sacred. He was a perfect statue, untouchable, a memorial to manhood.

Yet, Craig’s Bond is none of these things. His Bond is deeply flawed, scarred, and afraid.

From the get-go, Craig’s Bond in “Casino Royale” is a man-child. He is told multiple times by other characters that he is driven by pride and ego rather than genuine service to his country. He goes all in, not because he really knows what he’s doing, but because he’s pursuing success defined by the only life he knows. A life where he, inevitably, dies young.

In one of our first scenes with Craig’s Bond, he says to M that “007’s have a very short life expectancy.” Craig plays it with wisdom beyond his years, dry and cold. This is a young man, who has wilfully entered a life where he knows he will die. Vesper Lynd, our Bond’s first love interest, tells him he can change if he wants to; he can leave. He smirks and deflects — because Craig’s Bond is still playful. But that sense of humour is a survival tactic to conceal, to protect, most evident in the film’s infamous torture scene — Craig screaming “to the left” is the worst I’ve felt for laughing in recent memory.

But when Bond finally lets go; when he tells Vesper he has no more armour left, Craig’s voice wavers. It cracks; he repeats himself, he stumbles. This isn’t the suave Bond we know. He is without artifice; he is unrehearsed. For the first time, he is vulnerable because someone sees him as more than a very dangerous tool in MI6’s toolshed. So, with that, he leaves the only life he has ever known.

Then Vesper betrays him.

And just like that, the things that made old Bonds cool become deeply sad. In “Quantum of Solace,” he drinks to numb himself, he seduces to feel, he is reckless because he no longer cares. All of this is captured in a single scene, where Bond chooses to drink six Vespers (a drink he named after her) rather than sleep. He also pretends to forget what they’re called.

By the end of “Quantum,” Bond saves the day and sheds (most of) his baggage. But then in “Skyfall,” Craig’s Bond is forced to face down his other greatest trauma — the loss of his parents, only partly replaced by his surrogate mother, M. And before the opening credits, M replicates that trauma by ordering another agent to take a risky shot that nearly kills Bond. Bond’s worst fear is actualized — he is abandoned.

When the world thinks he’s dead, what does Bond do? Same as always. Drink. He’s back to his life of debauchery in a different tropical paradise, tempting a scorpion to bite his face while he takes a shot. Craig’s Bond is constantly on the verge of collapse throughout these movies. Years of repression and maladjustment has created a man who only knows how to kill or drink.

But when an attempt on M’s life fails, Bond comes back. Of course, he doesn’t send a text to let her know she’s worried — no, he breaks into her house and waits, with a bottle of whiskey in hand. This is how Craig’s Bond met M in “Casino Royale,” in her apartment, lurking in shadow. Then he was young, clear-faced. Now, Craig is haggard, unshaven, unkempt. His aqua eyes, once a sign of his energy, are cast in shadow. When M turns on the light, he doesn’t stare coolly back. He flinches — something he didn’t even do when shot at.

Gone is the steady aim, dead eyes looking down the barrel. He can barely hit a static target. During a physical test, he waits for the room to clear before slumping to the ground, heaving. His usual guile falls apart as his facade cracks at the mention of the word, “skyfall”; this Bond can no longer play the games he used to.

We have known Bond as stoic and capable. In “Skyfall,” he is neither. He is a man running out of time, fighting against a villain three steps ahead of him, who is going to kill his adopted mother. He only takes back control by returning to his past. He brings M to his family home, Skyfall, abandoned since his parents’ death to save her from the past that now literally stalks her. Craig’s Bond stands, facing the foggy plains of his youth, echoing Friedrich’s Wanderer above the Sea of Fog. Is Bond looking at the potential of his future? Or the time that will inevitably erode away at him?

Bond does lose M. Partly because, like him, she hides her wounds from everyone else. Except her wound is a gunshot, rather than internalized trauma. And as she fades, M, delivered with the signature wit of Dame Judi Dench, says, “I suppose it’s too late to make a run for it.” And Craig’s Bond replies, without a trace of his usual irony:

That’s the tragedy of Craig’s Bond. He is not happy being a spy. He is a spy because he has nothing else. Without it, he spirals. He only ever opts to escape this life when he is led by someone else, whether it is Vesper, M, or Madeleine Swann, his love interest in “Spectre.” He does not know how to live a life that does not have an expiration date.

And that takes us to “Spectre.” Craig’s Bond is now parentless for the second time in his life, and presented with two spiritual reflections of himself. In Madeleine Swann, hiding from her father, there’s the stoic Bond,” blocking any attempt at emotional connection. In Blofield, who murdered his family in pursuit of power, we have the prideful Bond, a man driven by ego. Which path will Bond take? Will he regress? Or will he grow?

When it’s all over, he stands over Blofield on a bridge over the Thames, MI6 on one end and Madeleine on the other. Blofield begs for death, and Craig’s Bond exhales. He steels himself, then lets his magazine clatter to the ground. He’s out of bullets, he says. Then he smirks.

“Besides, I’ve got better things to do.”

And he goes to Swann.

It may seem like the film is drawing from the same well, repeating the same choice Bond makes with Vesper in “Casino Royale.” But it’s not just repetition, it’s an echo. Bond has been burned before, and yet, he is going to try the same path, knowing where it can lead him.

That is what is so compelling about Craig’s Bond — the growth his character is allowed to go through. From a boastful man-child in “Casino Royale,” he becomes a surly teenager in “Quantum of Solace,” a loyal son in “Skyfall,” and a burgeoning adult in “Spectre.” Across these four movies, Craig brings that circle of healing and grieving into his Bond, until eventually, in “No Time To Die,” he finds it in himself to trust fully again.

I won’t spoil the end of Craig’s journey as Bond in “No Time To Die,” but I will say that it is a spectacular send-off to Craig’s Bond. It forces him to change in ways we didn’t know he could; to grow into a role he never imagined himself in. And by the time the credits rolled, even though I found it the perfect goodbye, I couldn’t help wanting a little more time with him.

In the end, my mother was right about Bond. He drinks too much, he sleeps around. We don’t even need to talk about that license to kill. But what she didn’t know about Bond, back then, before Craig took on the mantle, was that the character would become a psychologically complex character, capable of growth. He would become a character that learns to be better. And, as far as our action heroes go, that’s not the worst thing to learn.

Craig’s Bond is about redemption. I was never going to be as strong as Superman, as smart as Sherlock. But maybe, I could accept imperfection, and each day, veer closer towards a better life. After all, I’ve got all the time in the world.

Moving Pictures is a column by Myle Yan Tay (MFAW 2023) about the movies we love, the tropes we can’t stand, the underrated gems, the overrated schlock, and inevitably, why “Paddington 2” is cinema in its purest form.