Student Perspective: The Rise and Fall of Andrew Cuomo

Through fame and scandal, New York’s Governor represents a larger pattern within the Democratic Party. 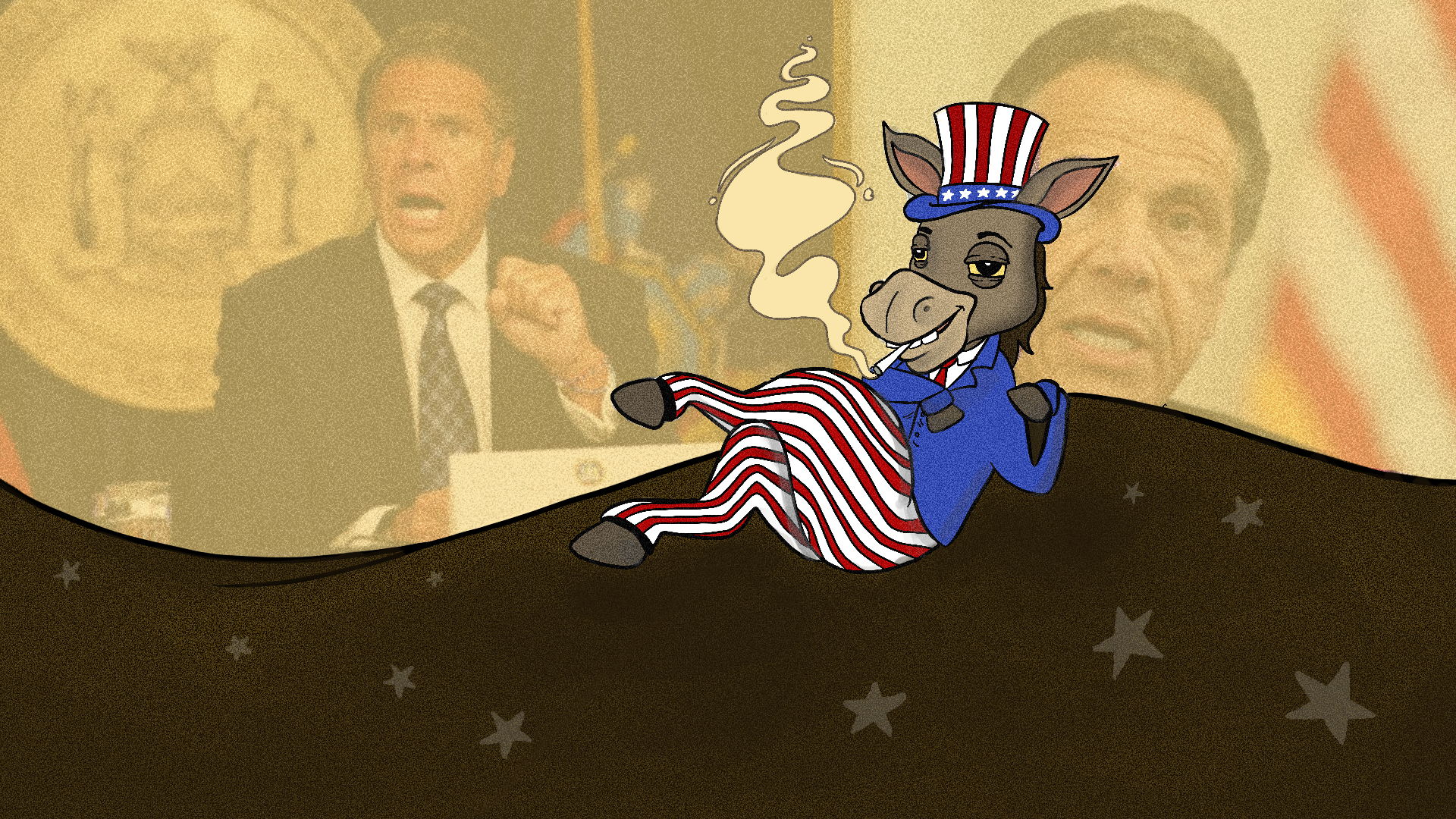 New York’s Governor Andrew Cuomo began the pandemic with widespread adoration as he held “deep breath moments” in his press conferences. But in the following months, that adoration turned to scrutiny, after revelations about decades of sexual harassment in his administration, and his neglect of widespread COVID deaths in the state’s nursing homes.

Cuomo, the son of former Governor Mario Cuomo, took office in 2011, and had a fairly standard first two terms in office. I’ve always found the view of New York as a liberal bastion slightly strange. Sure, we have strict gun laws, and a significant celebrity and arts culture, but the way we’re talked about by the opposition, Cuomo might as well be Lenin. For the past nine years or so, Cuomo toddled around as an afterthought, failing to live up to the stature of his father, a fixture in the Democratic party of the late 1980s. He legalized gay marriage, but eight years after our neighbor Massachusetts did. He spent $140 million on tourism ads after Hurricane Sandy decimated the region rather than putting it back into the state. Overall, he was your run-of-the-mill Democratic governor.

COVID changed that. Cuomo was immediately catapulted into the mainstream. His press conferences were appointment viewing, and a run in 2024 was looking very good. Cuomo had broken out of the New York machine and was a big star now. Sure, we had bodies stacked in refrigerated trucks, and people in nursing homes dropping like flies, but Cuomo made everyone feel good. I won’t lie and say it didn’t feel good to have someone who felt like a leader.

Even with the nursing home scandal lurking beneath him, Cuomo remained teflon, yukking it up with his brother on CNN. The media was touting him as a future presidential candidate. Cuomo had gone from an afterthought in the Democrat machine to its biggest star. The crisis doesn’t matter when you have a new toy to play with, and Cuomo made everyone happy.

Then, in December of 2020, Lindsey Boylan, a former aide to Cuomo, accused him of sexual harassment. In an essay on Medium, Boylan wrote, “Governor Andrew Cuomo has created a culture within his administration where sexual harassment and bullying is so pervasive that it is not only condoned but expected. His inappropriate behavior toward women was an affirmation that he liked you, that you must be doing something right. He used intimidation to silence his critics. And if you dared to speak up, you would face consequences.”

Following her, nine more women have come out with accusations, with one dating back to his time as Secretary of Housing and Urban Development in the Clinton administration. This caught fire, and prominent Democratic leaders, such as Alexandria Ocasio-Cortez, Chuck Schumer, and Kirsten Gillibrand all called for his resignation, with Joe Biden and Nancy Pelosi all supporting an investigation into Cuomo. At the same time, Letitia James, our state Attorney General, released a report saying that the state had under-counted nursing home deaths by 50 percent, pushing the total estimated deaths from 8,505 to 12,743.

The ship was sinking. All the hype, the book deal with Random House, the Emmy for his speeches during the pandemic, they were all up in flames. So what did Cuomo do as his horrific acts were revealed? He legalized weed.

Marijuana legalization was almost a running joke in New York since Cuomo took office. It seemed every year when the budget was being submitted, he’d make a half-assed effort to pass legalization. Obviously that amounted to nothing, as it would devolve in an endless debate of where the revenue should go. But as Massachusetts legalized in 2016, and New Jersey legalized in the 2020 election, it became a bit absurd. Once again, we’re supposed to be the land of the liberals, and we can’t even legalize weed? As the budget rolled around this year, the same thing happened. Cuomo said he was going to try and do it. His career was collapsing around him, and his approval ratings were cratering, and here he was, years late to the party his constituents have been at for years. Why is it that he got this done now? I’m sure the massive donations from the pharmaceutical industry played into it, but right now?

Maybe I’m more conspiracy-minded than most, but passing this right as all eyes are on you killing the elderly and harassing women is a bit convenient. Cuomo sat on his hands for years, passing the bare minimum of what the left wanted, as long as it didn’t eat into his bottom line. But he’s finally got a scandal, and now he does this? What’s next? Maybe he’ll reform the police, or make housing affordable in New York City. This is no surprise to me. This is the liberal playbook. You do nothing, you get in trouble, you finally do something.

Where have we seen this before? Biden announced a full withdrawal of the U.S. from Afghanistan by September. We’ve been saying that since 2011, during the Obama administration. Biden planned on decriminalizing marijuana, and he’s firing staffers who admitted to smoking. This is an absolute failure on the most basic things the Democrats have discussed for years. This does nothing but alienate people from the left, if you can even call Cuomo or Biden “Left.”  We can talk about unifying the left all we want, but when two of its biggest figures seem disinterested in any of the core tenets or values they claim to have, we will only become more divided.

In the weeks since I began the writing and research process for this article, the Cuomo scandals have somehow worsened, with allegations that the governor illegally gave his family priority for COVID tests, and an ongoing investigation into his use of state resources to write his memoir about the pandemic. This only proves my point, that the corruption that seeps through will continue until we do something about it, because the powers that be will not.

I don’t feel like the people representing me have my interests in mind, or anyone’s for that matter, rather the interests of those in control, be that defense contractors, private prisons, or the pharmaceutical industry. The last year has been an example. Why is it that my concerns are only relevant when they need me, or when they know they’re in deep shit? Cuomo is the governor of one of  the most important states in the country, and what did he do with that? Harassed women, wrote a crappy book, and nothing else of note. What will Biden do with the presidency? Probably the same.