Spicing up my comics & storytelling with an element of chance. 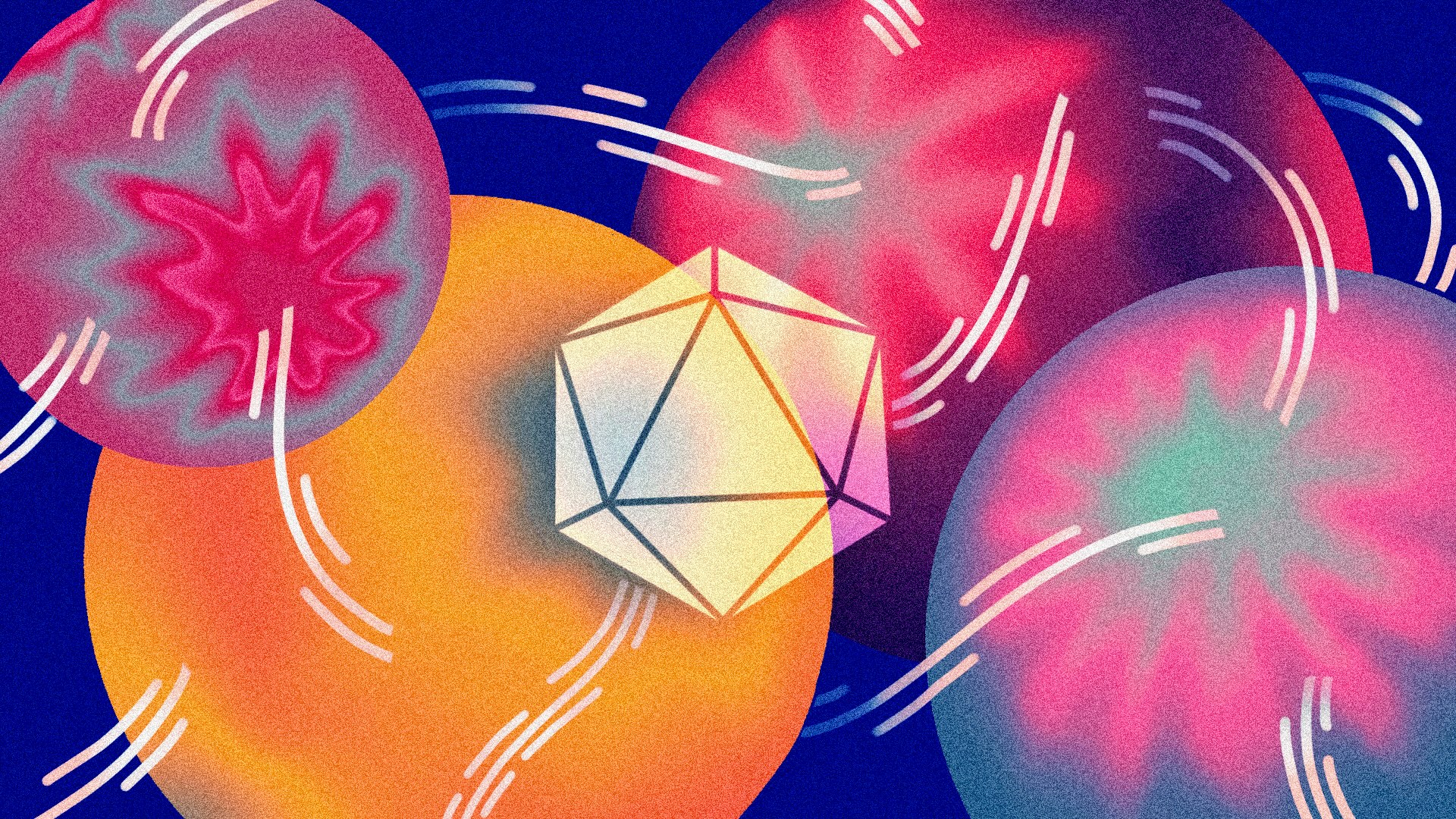 Dungeons and Dragons had small waves of popularity throughout its nearly 50 years of existence, but the modern day has seen it rise to the mainstream in a way that was unthinkable to original nerds who enjoyed it. But through the medium of live-play podcasts like “The Adventure Zone” and “Critical Role,” people are starting to realize: Dungeons and Dragons is a proven medium for new and innovative storytelling.

Dungeons and Dragons, also known as DnD, is a tabletop roleplaying game, commonly shortened to TTRPG. Created by Gary Gygax in 1974, the game involves a group of people banding together to create and explore a fantasy world. This is led by the Dungeon Master or DM; the DM builds the world, plans out the plot, and creates the bones of the game. The rest of the group is the party: They create unique characters to traverse the world and experience the story the DM creates. None of the party’s roles are assigned to them, and they get free rein to interact with the story as they please, whether it be following the plot exactly as the DM planned or going off on their own personal quests.

As a game that involves coming up with a story on the spot, DnD tends to draw in a lot of artists. The School of the Art Institute of Chicago (SAIC)’s Dungeons and Dragons club is full of artists who enjoy making stories and characters for these invented worlds. In an interview with Audrey Nguyen (BFA VISCOM 2022), one of the people who run the club, I wanted to see what it was that drew fellow artists to DnD.

“I really like how you are able to make your own choices and shape the game through your actions while having the opportunity to be creative with it,” Nguyen told me. “You get to experience this world with a group of friends, make silly jokes, and just enjoy the moment. There are challenges and situations in which you never know what could happen, but sometimes you take these risks anyways. The limit is your imagination, and that’s what makes it so exciting.”

This is vital to an artist’s creativity — by getting yourself to think outside of the structure that you initially planned, unique, and interesting ideas can happen. Audrey also described the way that DnD has also helped her creative process: by forcing her to “come up with a solution or idea quickly. As a DM sometimes I’d have to think of anything on the spot and just let it flow.”

As artists, it’s easy to fall into the trap of having a strict idea in mind that you want to accomplish. But unexpected problems and deadlines always mean the original idea needs to be changed to better fit the situation. DnD can have the same problem when a DM has a specific plot in mind, but the players veer down their own paths. By solving these problems in the relaxed setting of Dungeons and Dragons, you get to practice for when these issues come up in your actual practice.

Personally, I have found this aspect of DnD to be a useful jumping-off point for writing. As a comics artist, I take stories and give them a visual form. Dungeons and Dragons allows me to create a narrative collaboratively and explore plot decisions I wouldn’t normally think of. Since getting more involved in regular DnD sessions, I’ve been able to adapt the plots of the games I run into comics.

One campaign that I run, and want to make a comic version of, has been dubbed, “Diners, Drive-Ins, and Dives and Dungeons and Dragons,” also known as “5D.” It’s inspired by the Food Network show starring Guy Fieri, and in it, the players travel to different restaurants and battling the head chefs. It was the first campaign I’d ever run, and was meant to be a chill, goofy game. However, when one of the players’ characters died, the game took a darker tone. This darker tone led me to write so much more lore for the world. Now that I’ve done all this world-building for the game, I want to draw it. The characters my friends created are also inspiring. From a salamander wizard named Slimy to a succubus who worships Alton Brown, the room for creativity is huge.

By creating a world and using it in Dungeons and Dragons or a similar TTRPG, I can test out plot points, explore the way people would react to the settings I create and build characters that I wouldn’t otherwise come up with on my own. In “5D,” I had planned the world to be relatively low stakes, but now it’s a corrupt system that the characters are overthrowing — and all the better. This helps to flesh out the worlds I build, as well as get me thinking about other stories these worlds can tell. Whether I am directly adapting a campaign to a comic format or incorporating it into my personal writing, the element of unexpected surprises and character arcs enrich the stories.

Another way I’ve found Dungeons and Dragons, and other forms of roleplaying like LARP, making its way into my art is thinking about pieces from the perspective of characters. Another aspect of my practice is fiber arts. The medieval fantasy setting of DnD and LARPing have inspired me to explore historical textile techniques, along with concepts of herbalism and alchemy. Since the majority of my characters are magical healers, I want to incorporate historical magic into their behaviors.

One of my favorite characters to play is a healer named Taika, a magical creature called a fae who has a boisterous personality. For their healing practice, I’ve incorporated real-world herbalism by doing research and filling out a diary of their “discoveries” in the field medicinal plants.

By exploring these topics within a fun game, it creates motivation to explore the real-life inspirations of these worlds. This broadening of understanding can help deepen the influences an artist has in their work. My interests wouldn’t be as focused on historical practices if I didn’t study them to give my characters more authentic personalities.

Dungeons and Dragons is a fantastic game for artists. It has so much room to invent new identities, develop creative problem solving, and inspire new stories. Seeing it grow in popularity has made me excited to see what new stories we’ll get in the realm of fantasy.