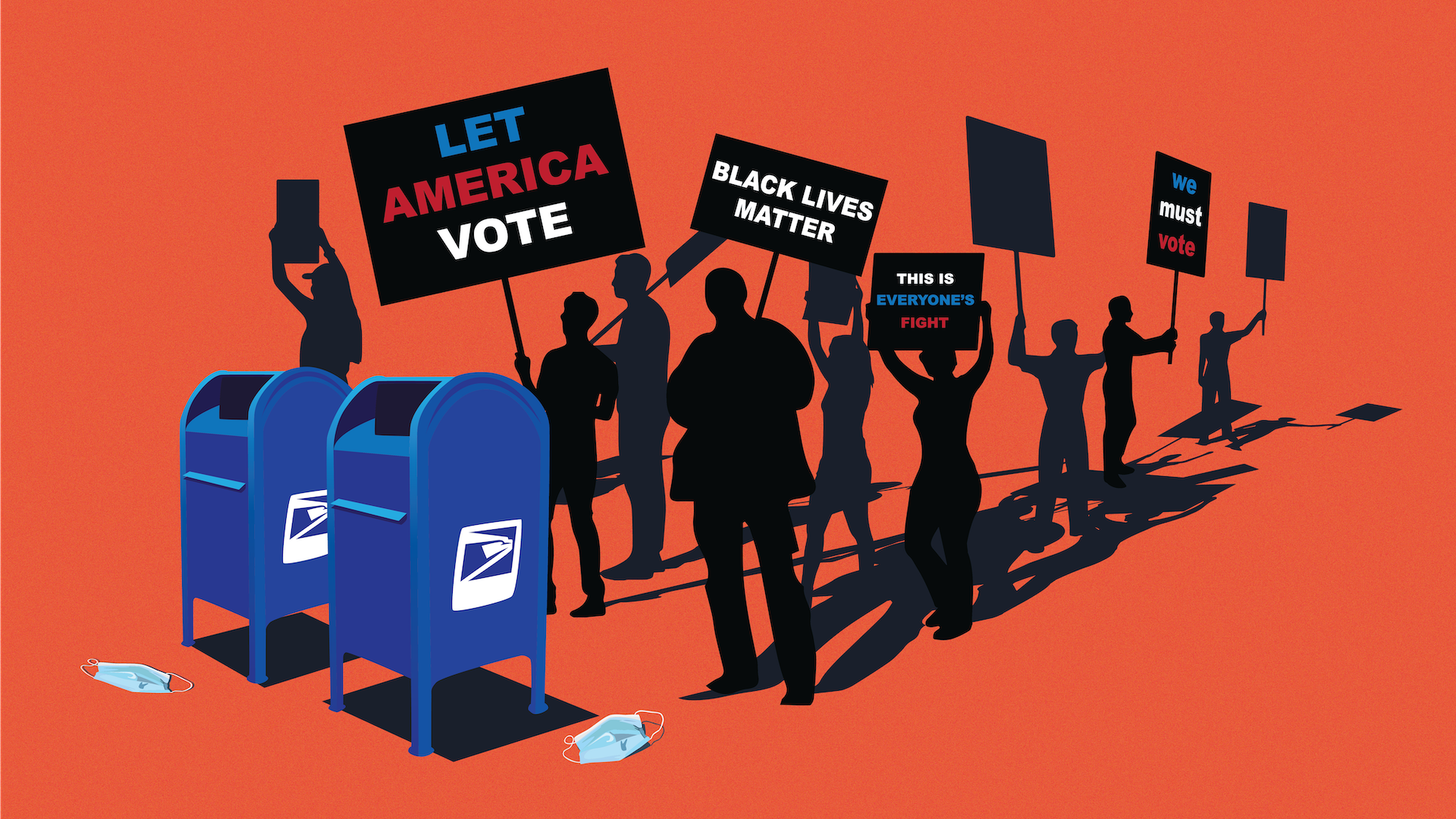 The 2016 election saw many U.S. voters forced to abandon their principles and submit to a long-broken electoral system. Now, four years later, with 71 percent of college students committed to voting this November, it’s fair to say that many of us are still prepared to engage with a political system that has denied younger voters the opportunity for change. But with just over a quarter of college students uncommitted to voting, what change, however incremental, are we expecting to achieve?

As the nation approaches a critical presidential election, coupled with the disasters of the year both ahead and behind us, we may find ourselves — despite the progress of 2018s midterm election — still wedged between lame, partisan discourse, malnourished by the remnants of the American dream, and begging one another to vote while others still grapple with their own indifference.

The outcome of this November, we remind ourselves, will determine not just the durability of the guardrails of our democracy, but the manner in which we will resolve the immense crises we face today.

And yes, while overwhelmed with the enormity of our current circumstances, we cannot ignore the monumental issues that have yet to be addressed.

For those of us who are members of Gen Y and Gen Z, we have been caught in a generational stagnation from massive student debt, low-wage labor, systemic racism, unaffordable housing, and limited access to healthcare — all of which have been exacerbated by the pandemic and consistently disregarded by the political establishment. The stagnant, condescending, unserious approach from both sides of the political aisle have led some of us to question the value of our voice and participation in this upcoming election.

With the history of neglect that we’ve experienced, could you blame us?

The 2016 democratic primary was a turning point: We saw the failure in an entire political party’s election management; friends and acquaintances whose names were purged from the voter rolls come election day; and the direct result of our peers, flustered and disillusioned by the process, who ultimately opted not to vote Nov. 8, 2016.

In that election, only 51 percent of eligible Millennials reported that they submitted a ballot. And while the 2018 midterm election was historic for the rise of progressive voices elected into office, only 42 percent of Millennials reportedly voted. Though that’s almost double their 22 percent turnout for the 2014 midterm, the jump is nearly dwarfed by mostly first time Gen-Z voters in 2018 with their reported 30 percent voter turnout.

In this moment, Millennials have overtaken Baby Boomers in population size and Gen-Z will account for one in ten eligible voters in this election. So why, with numbers like these, aren’t we voting?

Perhaps it’s that even with some members of Congress lifting our voices on Capitol Hill, we understand the inescapable disadvantage we find ourselves facing. In a 2019 report from the Government Accountability Office, researchers discovered that millennial households were less likely to consist of homeowners, more likely to be in debt (student loans), and are earning less per year than previous generations. Of course, this is no shock to any of us. If anything, the study cements our understanding of a political process that is undeniably broken — look at North Carolina and Georgia’s 2018 midterm election — with the outdated electoral college system that siphons the voice out of the majority. Among younger voters, 65 percent prefer the presidency to go to the candidate with the most votes. And while the left-leaning, younger generation advocates for a fairer system — like ranked-choice voting — we cannot allow the roadblocks of a broken process to diminish our responsibility and override the significance of our voice, however it’s counted.

And in the summer of 2020, our voices reigned. In response to police brutality and systemic racism, we invaded the streets, occupied town centers, and flooded city council meetings demanding justice, equity, the allocation of police funding to communities of color, and, in some cases, the abolition of the police. Our actions became the largest protest movement in U.S. history and in some cases, cities complied to the demands of the people.

There is absolutely no doubt, especially in light of the recent police shooting of Jacob Blake, that there’s still a tremendous amount we must accomplish. As police unions across the country align themselves with the “law and order” president — a president who on national television threatened military action on peaceful protesters and then encouraged the violent dispersal of protesters for a photo-op — we cannot afford to be discouraged.

If we must, we can mourn the progressive voices left behind in this Democratic presidential primary, but we can also celebrate the achievements and victories of local elections. From Cori Bush, a Black Lives Matter activist who defeated 10-term Missouri Representative William Lacy Clay Jr., or Jamaal Bowman, who unseated New York’s 30-year establishment Democrat Representative Elliot Engel, to Illinois’ own third congressional district, where Marie Newman won against the conservative Democrat Representative Dan Lipinski.

The stubborn trauma of our time will not escape us even if we must vote for a middling candidate. However, a reluctance to vote, to research, to participate in the process completely demeans each and every action we’ve taken not just this summer, but every form of resistance this administration has forced us to partake in through the past four years. We cannot allow our wariness to permit the continuation of this administration and leave behind the rising political voices of our generation.

We must vote. And we must advocate for our friends and family — particularly those most politically despondent — to join us.

While this country is currently adrift with no universal response to COVID-19, this November has become a potentially deadly scenario that has forced states to reevaluate and expand their mail-in-ballot programs.

In Illinois, officials in Cook County and the city of Chicago are encouraging voters to vote by mail. Additionally, in consideration of the newly appointed Postmaster General’s changes to the United States Postal Service, Cook County will be setting up 50 secure dropboxes for ballots across the county beginning Oct. 9.

Voters in Illinois who have voted in any previous election will be receiving an application to register for a mail-in-ballot. All other residents are required to apply online to receive a mail-in-ballot. Ballots will roll out to voters by the end of September with a deadline to request a mail-in-ballot on Oct. 29.