A One-Way Ticket In the Pandemic

On leaving the city to be with family, facing racism in the pandemic and feeling all sorts of helpless. 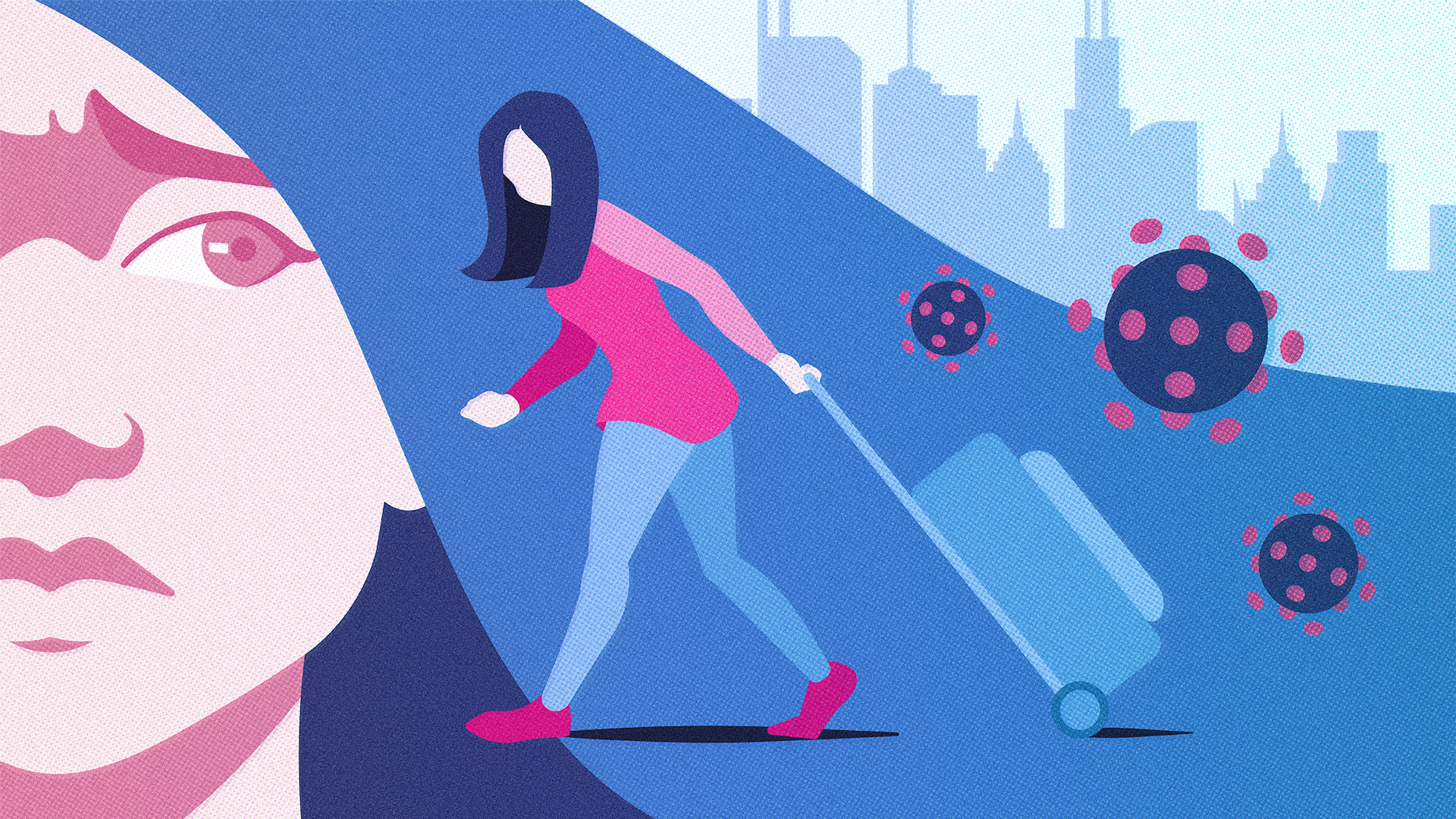 I bought enough supplies to last me for at least two months. It was Thursday evening, March 12, 2020, when we’d just received the first in a string of emails informing us that school was closing. I just so happened to be at Target when I saw it. So I did what everyone else was doing — I stockpiled (though in hindsight I shouldn’t have; please don’t do this). I ran from Target to H-Mart to Chinatown to gather all the food and supplies I needed to get me through the next two months. I said goodbye to my roommate, surveyed my suddenly empty double room, and prepared to hunker down.

On the other side of the globe, my parents were frantic. My mother implored me to come home. I insisted I was fine; it was all fine. Having amassed enough supplies, I was calm. I was collected. I was ready to ride it out.

Cue a phone call with a close friend from home. It was not the fun, lighthearted conversation that we usually had. My friend was calling from the U.K., which was (and is) a few weeks ahead of the U.S. in the coronavirus outbreak. What was happening there felt like a preview of what was to come. Her fears began to stir mine. I began wondering about an impending lockdown, and immediately I began to panic. I tried to keep a cool front as she candidly laid out her fears to me, but my fear began mounting. My thoughts were in a frenzy; my heart was thundering in my ears. Both of us could tell that we were both holding back tears from the sheer anxiety. What if the U.S. went on lockdown and I could no longer go home? What if Singapore, my home country, imposed a complete travel ban and I became unable to enter the country? What if I got infected while I was here? Could I expect the U.S. public health system to provide me, a non-citizen, with the care and treatment that I needed?

I immediately called my parents afterwards. I was going home. I made sure it was audio-only so they wouldn’t see the full-blown panic on my face.

The remaining days, which I spent meeting friends for the last time, packing up, and giving my stockpiled supplies away, were bitter. Melancholic. Woeful. Desolate. Forlorn. Dismal. Dispiriting. Every synonym of “sad” you can find. My room was the picture of chaos as I desperately tried to fit the life I’d built in Chicago into cardboard boxes — bound for storage till who knew when. I had to make quick decisions as to what I was keeping and what I had to give up. Every act, decision, and interaction was  — and still is — heavily cloaked with doubt and uncertainty. Conversations were — are — laced with “ifs,” “maybes,” and “probablys.” Our new timestamps became “pre-pandemic” and “post-pandemic.” For the first time, I bought a one-way ticket.

These last remaining days were the ones most filled with paranoia. It began with a news report—a fellow Singaporean had been brutally attacked on the streets of London because of his Asian/Chinese features.  I became nervous and wary whenever I was out on the street. I kept my head down as much as possible. I’d get tense whenever someone glanced or stared at me. Whenever I crossed the road, I’d stare at the cars and wonder if one of them might just run me over out of spite; it’d be so easy to squash me like a fly. Sounds a touch dramatic, I know. I thought so too until I read about the attempted murder of an Asian American family in Texas because the perpetrator thought that would eradicate the coronavirus. I was never under the impression that the U.S. was completely safe, but I had never felt this unsafe. I hated that my heart was now filled with so much mistrust.

On my last Saturday before flying home, a black woman stared me down and then deliberately walked right next to me to mutter “coronavirus” under her breath, just loud enough for me to hear. The act was so petty to me I mentally froze for a few seconds, not knowing how to react. Then came waves of infuriation, irritation, and annoyance. I was indignant. And what I was even madder about was that as a black woman, shouldn’t she be painfully aware of how bigoted an act of discrimination is? As someone who has likely had to experience racism and sexism her entire life, shouldn’t she know how it feels to be on the receiving end of discriminatory remarks? The lack of compassion baffled me. I am thankful that what I experienced was at least non-physical and non-aggressive and certainly nothing much compared to what others have had to experience; yet, I am also irate that I have to feel grateful for something that shouldn’t be happening at all.

That was not all. School was just starting to get really exciting for me. I was getting busy for all the best reasons. I had opening receptions coming up. I had a spot in SITE for Artbash. I was awaiting results for another category and getting ready to apply for another three. I was in the middle of getting my CPT authorization for an internship that I’d been looking forward to for months. I was really getting into the black and white photo class that I had, initially, felt so out-of-depth in. I was motivated to experiment more — I’d bought a bunch of darkroom paper to try out just a week prior. This class which I had to waitlist for, which I’d prayed so hard to get into, and miraculously did, was rudely and abruptly cut short. The photo book that I was so eager to make and present for finals would never be realized. Everyone was starting to warm up to one another, but the class was suddenly flung to all corners of the world. The rest of the year had seemed so perfectly mapped out. But suddenly all of it was erased and I had to toss it all out the window. Everything felt so terribly unfair.

Resentful and frustrated, I needed to blame something, anything. I needed to direct my anger somewhere. I needed someone to take responsibility for the many compromises I’ve had to make, the major, unfathomable disruptions to my life, and the suffering of the world. However, as embittered and discontented as I feel, in the grand scheme of things, the disruptions to my life are insignificant compared to the lives saved and the ones in peril at the moment. More importantly, I’m fortunate to be able to make the necessary changes to my life. Being able to carry out safe distancing, continue working from home (with decent enough wi-fi and basic art-making supplies), have a support system around me, have financial stability with parents who are able to work from home, and so much more, is a privilege. If anything, this pandemic has highlighted and exacerbated existing socioeconomic divides.

A 24-hour flight later, I am safely back home in Singapore. I have faithfully served my 14-day stay-home notice. Recently, Singapore’s “circuit-breaker” (the Singapore government is using this term rather than “lockdown” to avoid causing mass panic, but it’s essentially the same thing) was just extended for another month due to the rise of the second wave of cases. The country’s caseload has risen exponentially and, as of May 7, passed the 20,000 mark. Despite this, the intense paranoia and fear I felt have washed away. Now, the whole family is home all the time, and there’s too much noise for our not-terribly-small-but-also-not-very-large apartment, but we’re safe. We’re healthy. The Singapore government has its faults, but I’m getting clear information and instructions, and fake news and misinformation are being efficiently and effectively quashed. I am still tremendously frustrated and infuriated by our current situation, but now, in my cushion of security, I find myself better able to think beyond my own needs and consider how I can help. Almost everything may be beyond my control now, but this is one thing that isn’t. Thinking of how to help. Not only make the best of what is, but what can be.

Literature A One-Way Ticket In the Pandemic
« Previous Story

In Translation: On Being Desi