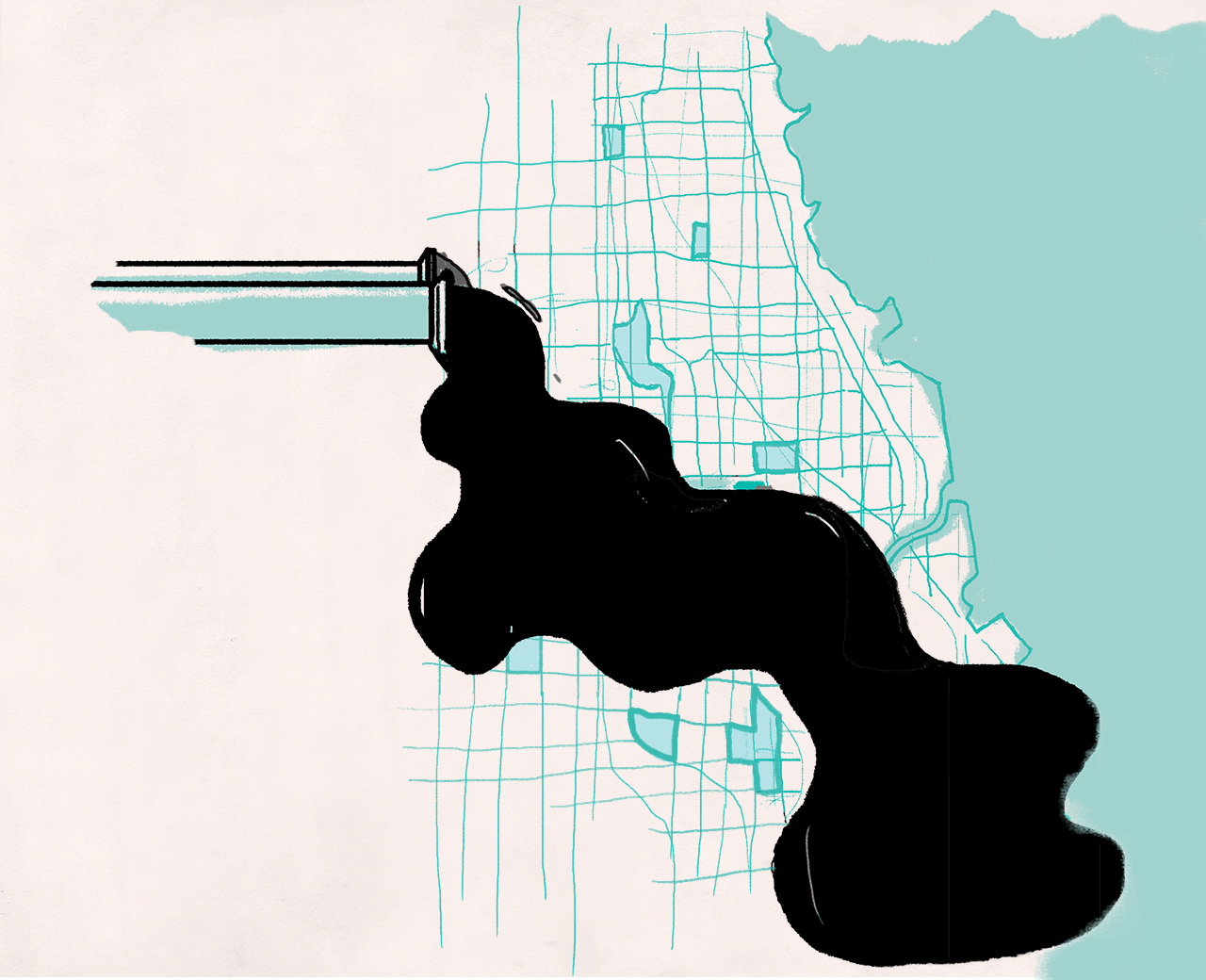 Steelworkers Park boasts a rock-climbing wall and lakefront walking paths now, but through most of the 20th century, it was filled with molten slag and a steel processing facility that employed over 20,000 domestic and immigrant workers. The park is one of several green spaces on Chicago’s Southeast Side, close to the Indiana border. It sits at the end of E 87th St. and the edge of Calumet Harbor, where the Calumet River snakes south from E 95th St., flanked by a variety of massive industrial facilities that line its sharp curve all the way to Lake Calumet, several blocks south. Industry saw Southeast Chicago’s river and railroads in the late 1800s, and put down roots that remain intact to this day, despite the city’s efforts to give the area a more “green” appearance.

The neighborhoods surrounding Steelworkers Park are also home to a zealous community of environmental activists who blow the whistle when their corporate neighbors threaten the health of their neighborhood. Southeast Environmental Task Force (SETF) began their fight in 1989 when activist and Chicago Public School teacher Marian Byrnes united 30 grassroots organizations in opposition of a steel-waste incinerator in Trumbull Park.

One of SETF’s more recent victories saw the permanent banning and removal of petroleum coke, also known as petcoke, a primarily carbon-based byproduct of oil refining processes. Oil companies in the United States and Canada sell petcoke to countries with fewer regulations surrounding what substances they can burn for energy.

But petcoke’s mere presence in the United States can be harmful. Through much of the 2010s, heaping piles of the fine black dust lined the banks of the Calumet River in storage facilities on Chicago’s Southeast Side, spreading particulates and residue into the lungs of residents in neighboring communities. The main storage facility loomed within a few short blocks of John L. Marsh Elementary School.

SETF’s concerns got the attention of The Environmental Protection Agency (EPA), which found that the company’s manner of storing and transporting the petcoke was not in compliance with the Clean Air Act. The EPA issued two Notices of Violation to the facility, KCBX Terminals Company, pushing it to decommission one of its operations, which was located next to the 100th St. Bridge along the Calumet River, but the company only complied after the second notice, almost a full year after they were first notified.

KCBX is a division of Koch Industries, a massive oil conglomerate based in Kansas and owned by the Koch family, who have a combined wealth of $124.5 billion, making them the sixth wealthiest family in the United States. The family’s history of commingling their oil refining pursuits with their political interests began when Fred Koch, father of current Koch Industries CEO Charles Koch, worked with the Soviet Union in the 1930s. Joseph Stalin paid Koch’s company — at the time called Winkler-Koch — $500,000 to build 15 oil refineries and train Soviet engineers. In the years leading up to World War II, Winkler-Koch helped the Nazi regime build one of the largest oil refineries of its time in Germany. On the post-war homefront, Fred Koch expressed his racist sentiments, supporting segregation in public schools and joining movements to expose communist conspiracies in the 1960s.

After Fred died, Charles and his late brother David took over the oil conglomerate and supported their libertarian political interests by funding think tanks that placed a scholarly veil over the deregulation of fossil fuel enterprises and tax cuts for their direct beneficiaries. According to research by veteran New Yorker writer Jane Mayer, the Koch brothers spent almost $25 million on organizations that lead efforts to dispute climate reform.

Within Illinois, the Kochs maintain a relatively subdued political presence, but not without leaving a few traces of their involvement. In 2013, their company explored a bid to buy eight regional newspapers, including the Chicago Tribune. This would have supplemented their preexisting stronghold over the right-leaning Franklin News Foundation. In 2017, the brothers hosted a gathering for Republican politicians and potential policy donors, at which then-incumbent Illinois Governor Bruce Rauner made a stealthy appearance. In 2019, the Koch Foundation donated nearly $2 million to the Chicago Council on Global Affairs, which claims to be “an independent, nonpartisan organization that provides insight on critical global issues,” according to its website. Though the foundation earmarked their donation for research into “military restraint” overseas, critics expressed concern that the Koch’s history of climate change denial conflicted with the causes that the council represents.

Roughly two years after SETF and the EPA succeeded in forcing KCBX to decommission their petcoke storage operations, The Chicago Tribune reported that air monitors in the neighborhood had detected concerning levels of manganese, a heavy metal that can cause memory loss, learning difficulties, anxiety, and damage to the nervous system. As manganese is linked to steelmaking processes, a new culprit emerged: S.H. Bell Co., a Pittsburgh-based metal manufacturer and distributor with a facility off of E 102nd St., also along the Calumet River. The 20,000 residents who live within a mile of the facility are predominantly low-income, Latino families.

S.H. Bell Co. has a history of operating without environmental permits and evading the state’s requests for pollution control. For years, the company refused to comply with Chicago’s regulations for bulk storage operators, whose presences are characterized by toxic substances that affect community members beyond the walls of corporate facilities. In January of 2017, Ohio EPA initiated a lawsuit against S.H. Bell Co. for failing to install air monitoring equipment that would inform the agency of whether or not the company threatened air quality in the surrounding area.

The city of Chicago and the EPA began taking action against S.H. Bell’s toxic legacy at the beginning of last year, tightening regulations and initiating a $1.3 million cleanup of contaminated soil on the Southeast Side. After testing soil levels of over one hundred homes along the Calumet River between E 100th St. and E 104th St., the EPA cleaned 15 homes with exceedingly high manganese levels, but did not receive enough federal funding to extend the cleanup to 35 other homes with slightly lower levels, and another 40 homes that tested positive for high levels of lead.

Like Steelworkers Park, manganese is a legacy of the steel industry and its influence on Southeast Chicago; but rather than celebrating the development brought by the community’s industrial workers, it hinders the development of the children that play in nearby green spaces, today.