Our Re: Working Labor exhibition used Amazon delivery services. Isn’t there a contradiction there? 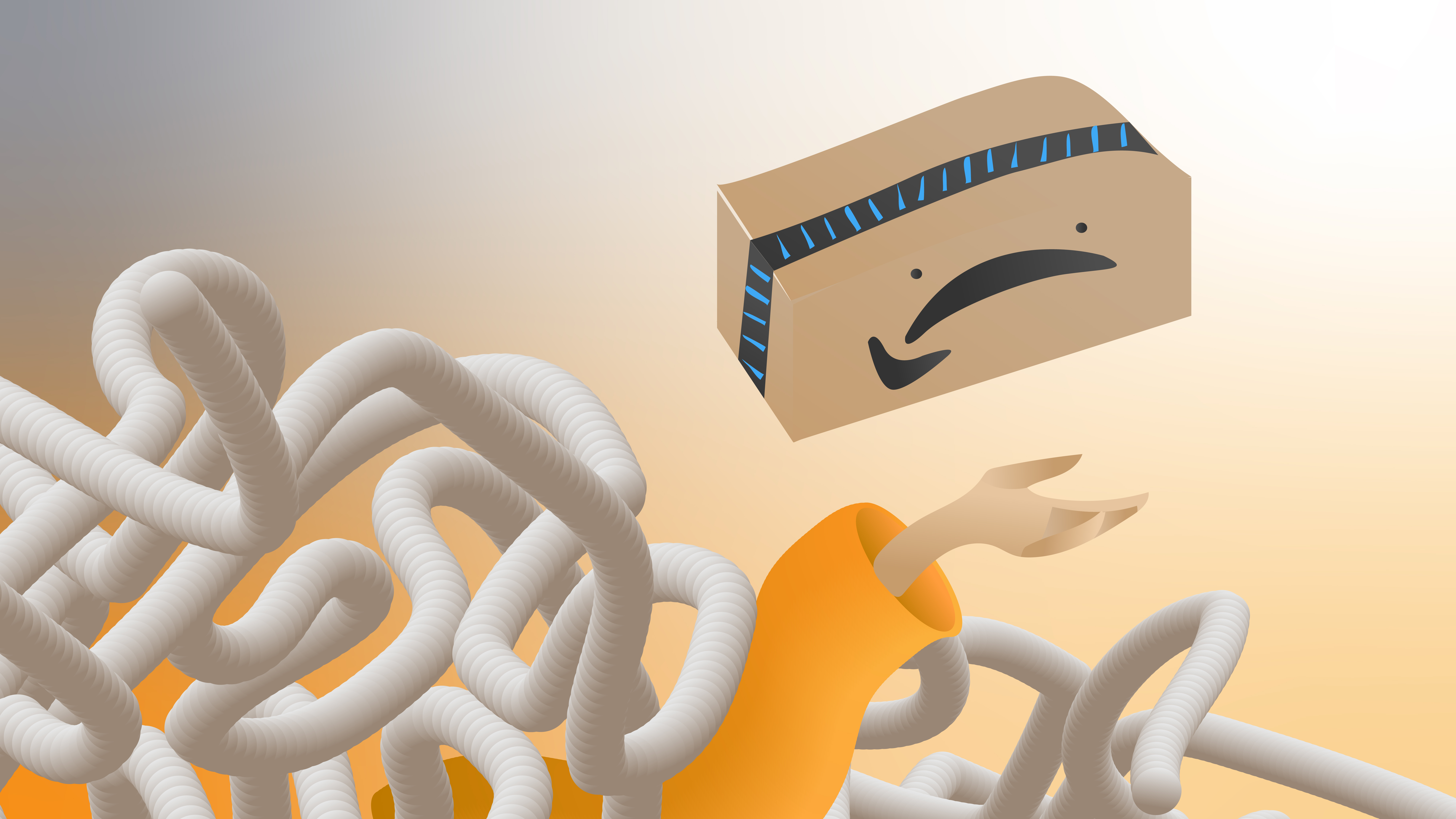 Last month, I collected mail for exhibitions managers. One day, this included five or six packages from Amazon. On the way to the manager’s office, I ran into you. I showed you the packages and commented — half joking, half concerned — about managers’ use of Amazon in light of “Re: Working Labor.” You responded: 1) No business is ethical under capitalism, so how bad can Amazon be? 2) Amazon has the widest variety of affordable options, and 3) If you have problems or concerns, let me know after you research a better and more convenient alternative. I’m not sure how I reacted. I think I laughed, cheerfully answered, “Okay,” and walked away to deliver the packages.

This experience unsettled me. How could someone so involved with “Re: Working Labor” so easily dismiss Amazon’s ethics and practices? Perhaps I should have sincerely and carefully voiced my concern, so you felt the weight of the issue. Should I have not submissively smiled and left but fought for my belief? No, I felt, I can’t risk bothering you, as I might be a gallery employee until I graduate from this school. I thought about approaching you after doing thorough research, but as a student worker who gets paid $13.50 per hour for installation and de-installation, should I really spend unpaid hours on this gallery? Is it naïve of me to expect an Assistant Director of Exhibitions to align more with what a gallery represents and is showing?

In this capitalist world where nothing is ethical, what can I do as I continue to be conscious of our reality? No one gave me a satisfying answer, so rather than wasting my time feeling bad, I took your advice and did some research.

Amazon operates more than 175 “fulfillment centers” around the world with the majority located across North America and Europe. The company’s avowed “customer obsession” has caused workers to bear unrealistic working conditions. In 2011, Amazon came under fire when workers in an Eastern Pennsylvania warehouse were kept in more than 100-degree heat with ambulances waiting outside, taking away laborers as they fell. In 2013, Gawker published stories emailed from workers which revealed below-zero temperatures in warehouses during the holiday season.

Their “Leadership Principles” document is used in every hiring, daily language, and guideline for workers to achieve maximum productivity. On average, workers walk 5-12 miles a day following the instruction of the computer system on their wrists. The same system continuously tracks their performance to ensure the company’s expected productivity and condemns workers when their productivity decreases.

In 2017, journalist James Bloodworth, who actually worked in a U.K. warehouse for months, wrote a piece in the Guardian referencing a survey which found that 74% of workers were afraid to go to the toilet during a shift with no break time. Bloodworth also described finding a Coca-Cola bottle containing urine in the workplace. It’s worth noting that the company’s anti-union training video states that the concept of the labor union does not align with the principle of “customer obsession.”

Amazon depends on federal subsidies and tax breaks for their cheap operation. Since 2017, Senator Bernie Sanders has been continuously calling out Amazon for not paying federal taxes, and for their workers’ reliance on government food stamps. In 2018, the senator proposed the Stop BEZOS (Bad Employment by Zeroing Out Subsidies) Act, which would require companies with more than 500 employers to pay a 100 percent tax on some government benefits their workers receive. Amazon initially accused Sanders of making false statements, and encouraged their workers to share positive experiences in exchange for gift cards. Then, in 2018, Amazon raised the minimum wage to $15 and declared that they would lobby to raise the federal minimum wage.

Amazon will continue to pay no federal taxes, and has received more than $1.5 billion in government subsidies since the early 2000s. According to the report published by the Institute on Taxation and Economic Policy (ITEP), Amazon paid $0 of federal tax in both 2017 and 2018, when the company doubled its U.S. profits from $5.6 billion to $11.2 billion. In fact, Amazon got a tax refund of $137 million in 2017 and $129 million in 2018, and still can offset $627 million of future taxes.

President Trump slammed Amazon via Twitter, even though his administration has legislated many corporation-friendly tax cuts. When the company loses more money than it makes, that net operating loss “carryforwards” are created, which can be used to deduct federal taxes in the future. Amazon earned their credits during several years of losses in concert with other tax codes. These tax codes include an accelerated tax credit for equipment purchases and research and development — part of the corporation tax bills passed at the end of 2017. Amazon earned their tax exemption credits from investing money in technologies, such as those wrist computers that monitor workers’ bathroom breaks.

On top of this, Amazon has been benefiting from billions in private incentives offered by local governments in exchange for bringing jobs and revenue to cities. Amazon’s first headquarters in Seattle grew the city’s economy dramatically, but the increase of housing costs in the area left 4,000 homeless people on the street. The company strongly opposed efforts to relieve this crisis in Seattle, and proposed plans for a second headquarters. Major cities joined this “HQ2” pageant with generous deals: Maryland offered $8.5 billion in tax credits, New Jersey with $7 billion in tax credits, Boston, Toronto, and more.

These incentives come from any budget for public facilities, such as schools, and will eventually be paid off by citizens’ taxes. Still, exact information on the deals’ terms are often private, even to local government leaders. Thus, the civic leaders and citizens can be forced to accept the proposed terms when Amazon chooses their cities. In Washington, D.C., Amazon even pitched the idea of  Amazon University, with a customized curriculum in partnership with Amazon.

What Can SAIC Do?

Unfortunately, Amazon is an exceedingly convenient option. Its biggest competitor, eBay, only functions as an e-commerce platform for consumer-to-consumer and business-to-consumer sales — it is less monopolistic. Online retailers such as Best Buy and Newegg sell a huge variety of electronics and tech equipment. Etsy, surprisingly, has not only artisans, but also suppliers who sell installation hardware for artists. For hardware, there are multiple Gordon’s Ace Hardware Stores in Chicago that can deliver. These alternatives offer a wide variety for great deal; however, they might not have 2-day shipping service. These are not the most convenient alternatives, and also might be or become unethical. But still, shouldn’t the gallery spend extra time to be conscious of their suppliers?

As we consider how conscious we should be of our partners’ ethics and our own practices perhaps it’s worth remembering some words from “Re: Working Labor”:

“Structural income inequality, a tax system that privileges capital over labor, and conditions, such as the offshoring of manufacturing and the rapid technical developments in robotics and artificial intelligence … continue to destabilize the workplace,” and “threaten to disrupt our democracy. Of course, the subject is much too complex to consider fully, but as a college of art and design … we were confronted with an extraordinary opportunity to rethink the nature of what a curatorial research fellowship could be and also to consider in a time of political instability what might be our most essential responsibilities. Once again, our task is to get the conversation going and to provoke creative response.”

I thank the Sullivan exhibition for successfully inspiring me to be conscious and responsive to such matter. I now want to ask the gallery, including myself, what creative, mindful, and realistic endeavors we can make.

One Response to Student Voices: Love Thy Labor