A tarot reading to predict the presidential election.

Everyone is clamoring for election predictions, so F News sat down with a tarot reader to get some real predictions. 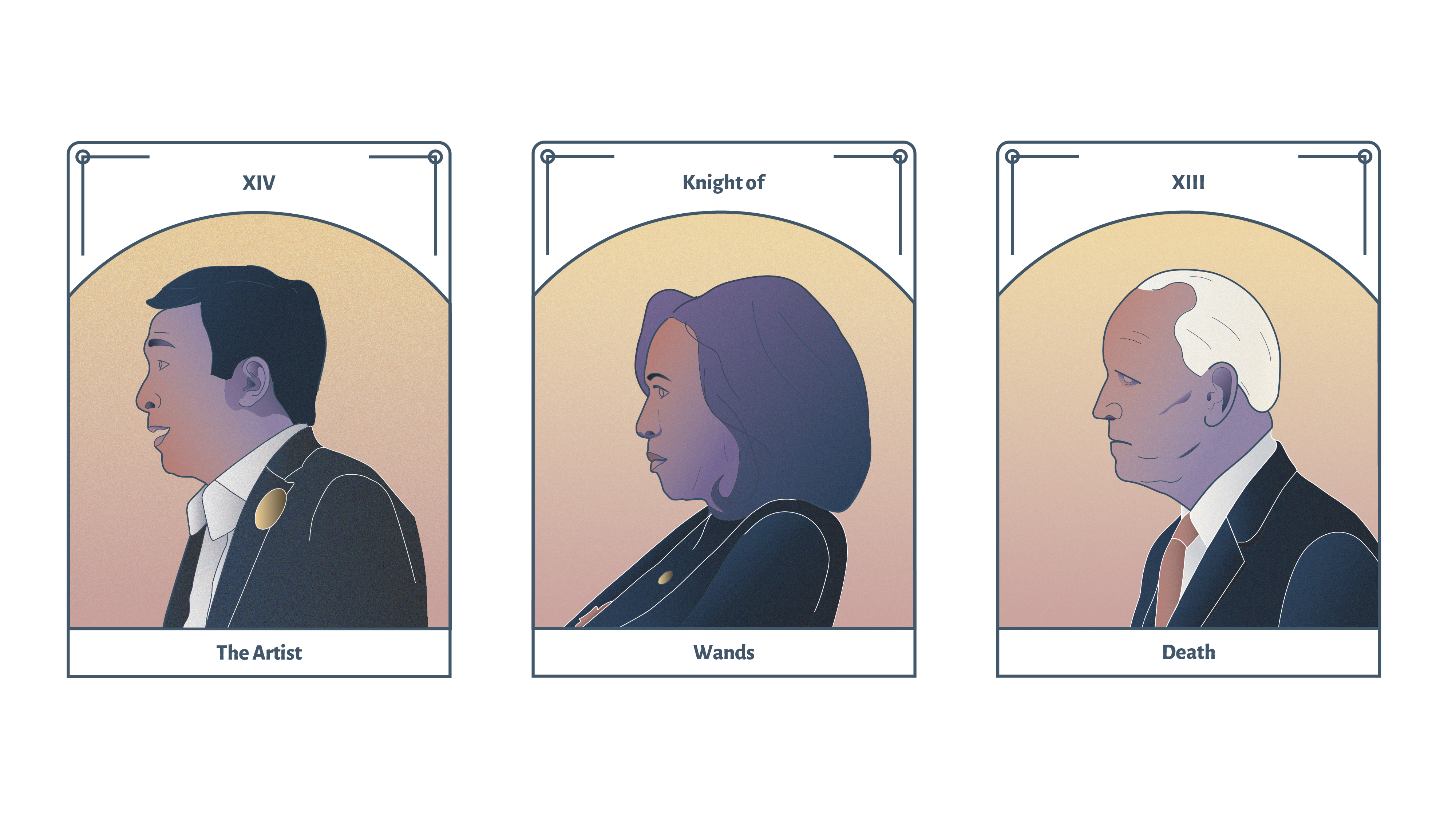 The presidential election seems to start earlier and earlier every cycle. Everyone is clamoring for predictions, but it’s far too early to know anything of substance. Or at least, so the liberal media will tell you. Here at F Newsmagazine we’re committed to getting the answers you need. So we sat down with a tarot reader.

Han Lumsden (BFA 2022), a practicing witch and a clairvoyant by blood, walked us through the process. The three cards drawn represent past, present, and future.

Leo: How will the 2020 Democratic primaries play out?

Past: Knight of Wands

The Knight of Wands represents accomplishment and adventure, but also deception. The Knight tells “little white lies,” pretending to serve the needs of others while accomplishing nothing of value for anyone but themselves. “Shiny deception,” as our reader put it.

Not as bad as it sounds, Han assured us. The Death card represents change and new beginnings. When pulled at the right time, it is a good thing. But sometimes that change can be dangerously irreversible: “We might fear that what’s happening cannot be changed, and it’s being changed in the wrong way.” In the coming months, a big change will come, and we will have to let go of the past.

Interpretation: Joe Biden will, finally, drop out. Andrew Yang will leap ahead into the top five before also dropping out. Marianne Williamson will see a brief poll spike when she releases a campaign ad where she hypnotizes viewers into donating to her campaign, and the resulting FEC proceedings will drag on for several years.

A mission has been accomplished. This is a self-reliance card. Following a lot of hard work, a lot will be gained. Looking to the future, said Han, there is great potential for change for the better: “Probably, whoever wins is going to be the right person.”

Interpretation: Buttigieg will shift gears into a highly successful lifestyle blogger while defense consulting on the side. Beto will see reason and go run for Senate instead. Sanders will leave to run as an independent, with Yang as his VP. (They will earn 3% of the popular vote next November.) The final democratic candidates will be Warren, Harris, and Booker.

Cat: What will the consequences of the election be for the American people?

When Cat pulled for this, all three cards came out upside-down. This means that, in the reading, their meanings are reversed.

The Artist is the vessel of creation. This card represents mankind at its most upright and stable. The reverse, unfortunately, represents restlessness, greed, and instability. Said Han, this read implies that the voting in 2016 was driven by selfish, judgmental, and restless emotions.

This card represents dishonesty, stealth, and destruction. Look at what you’ve done! But in reverse, it represents taking responsibility, acceptance, and a turnaround.

Interpretation: The backlash against Trump will leak from the left into the right as the trade war escalates and hinders the flow of discount MAGA apparel.

Appearing at the beginning of a journey, the Fool is the spirit of innocence, uncorrupted and unpredictable. The Fool avoids responsibility. Reversed, the Fool represents negligence, apathy, and carelessness. But it also means the opposite of impulse, and a sense of responsibility that things need to be fixed.

Interpretation: The American people will grit their teeth, take a deep breath, and start voting in their local elections.