How and why Olly Moore wants to redefine how we learn to count. 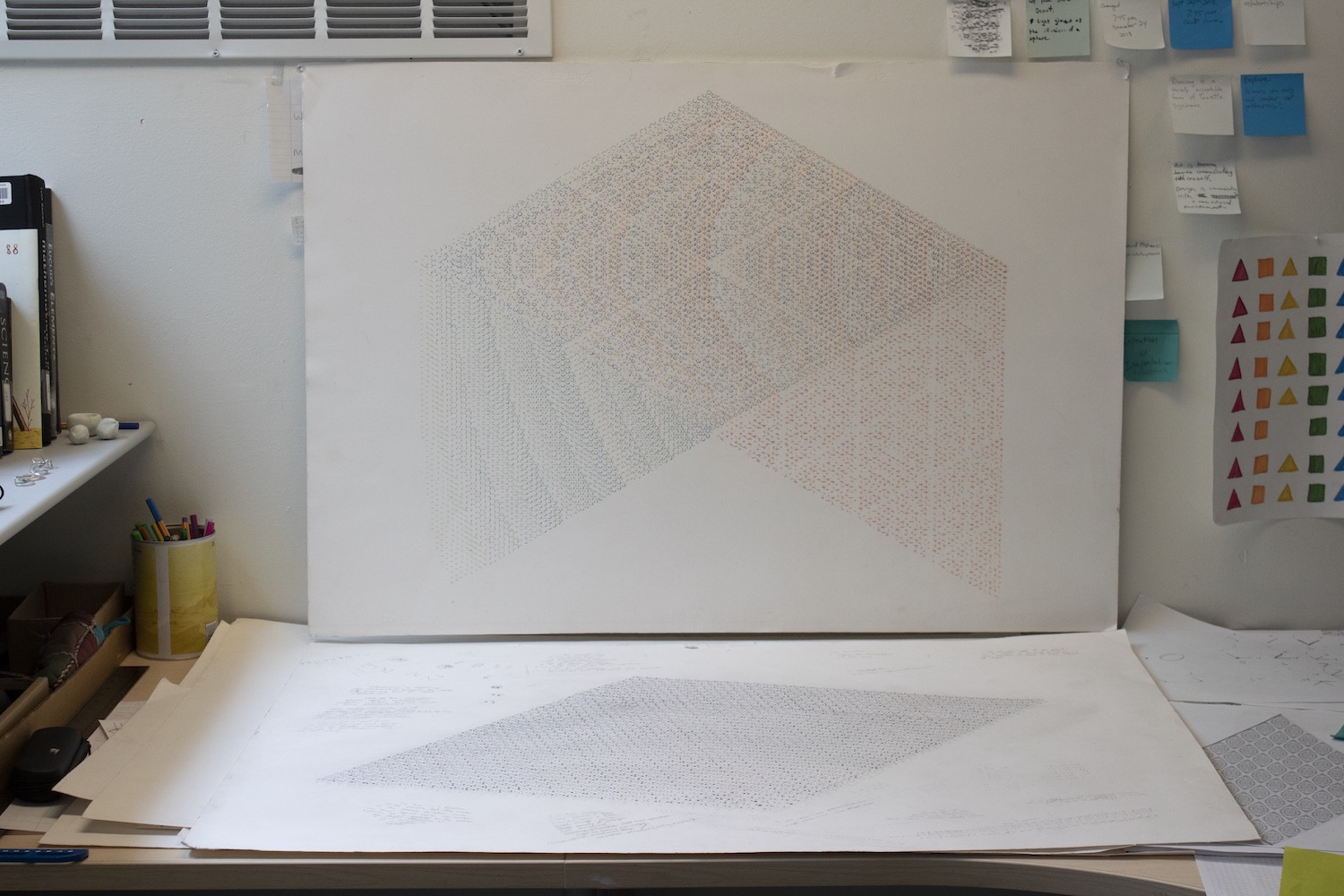 Visual representations of two of Olly’s languages, each of which took roughly 100 hours to produce. Photograph by John Lane.

In generating new counting systems — “languages,” he calls them — Olly Moore (MFA 2020, VISCOM) is not trying to reinvent the wheel, but rather, to repurpose it. Since an extremely young age, Olly has interrogated the fundamental assumptions of numbers, and counting, and examining the ways in which they influence people’s thinking. For example, he connects our method of reading numbers from the largest number to the smallest (568, for example, starts with “five hundred,” and concludes in “eight”) to trickle-down economics, the idea that centering wealth on the upper crust first will eventually benefit members of lower social strata.

School of the Art Institute of Chicago (SAIC) Section Editor Dustin Lowman recently visited Moore in his studio to learn more about his motivations, his current projects, and how he hopes to apply his work beyond art school.

Dustin Lowman: Why don’t you start by telling me how you got interested in counting systems?

Olly Moore: I was a really young kid, pre-elementary, and I would count the pages in books. So when I got to school, I was put in advanced math classes. But once they started trying to teach me how to multiply, I lost interest. I remember a moment when one of my teachers was trying to teach me double-digit multiplication. It was first or second grade. They explained the steps very clearly, and I understood what steps to take to get the answer, but I was trying to figure out how and why that happened. I got caught with why the numbers themselves were representing those concepts. Why the number seven, for example, meant the quantity of seven — the shape of the number, and also its sound.

DL: So that question got in the way of interest in multiplication, algebra, etc.?

OM: Yeah, the lack of an answer made it so I was uninterested in learning any math beyond simple counting. My work is still about simple counting. It’s just really complex simple counting, different languages for it. There was a big break from that age until probably twenty-five or so. I studied art in my undergrad, and learned about constructing and composing works of art, which eventually led into a resurrection of my earlier work. I used a lot of that education to build these projects.

DL: So, you didn’t have the express intention of applying your art degree this way?

OM: No, not at all. My intentions for studying art were rooted in this desire for freedom, to search for something new. Art encourages new ways of thinking, new discoveries. Exploration is a fundamental part of my work — conceptual exploration, abstract as opposed to geographic. In discovering a lot of this work I’ve recognized the importance of variety, of different ways of looking at things.

DL: You say “discovered” and not “come up with.”

OM: Yeah. I think these exist in the world already. This ties in with exploration. I don’t like to take credit for these things because we live in an ever-changing environment, and to claim ownership on parts of it separates us from it. Imposing, as opposed to witnessing has created a lot of problems.

DL: Is your overarching goal to discover something that people have overlooked about numbers or about counting?

OM: One of my goals is to connect these concepts with elementary education. I’m applying to speak at next year’s National Council of Teachers of Mathematics conference. It’s in Chicago, and it’s a 100-year anniversary. If I’m able to get into it, I’ll have a way into having this material become curriculum for children. I’m imagining me as a kid. If I’d had this way of learning numbers, being able to play with them, I would’ve really benefitted. Kids like to make up their own languages too, so if children can be given these languages, they might start building their own. Maybe kids can figure something out that adults couldn’t even imagine.

DL: I think a huge strength of your work is its aesthetic power, that you’ve produced appealing images. Once viewers have the pleasure of seeing the patterns, they’ll wonder what’s at the root.

OM: A lot of the feedback I’ve gotten is people saying, “I look at these images, and I feel like there’s something important in them.” Whether or not they believe me and what I’m saying, they can still feel that the images themselves hold some sort of meaning. 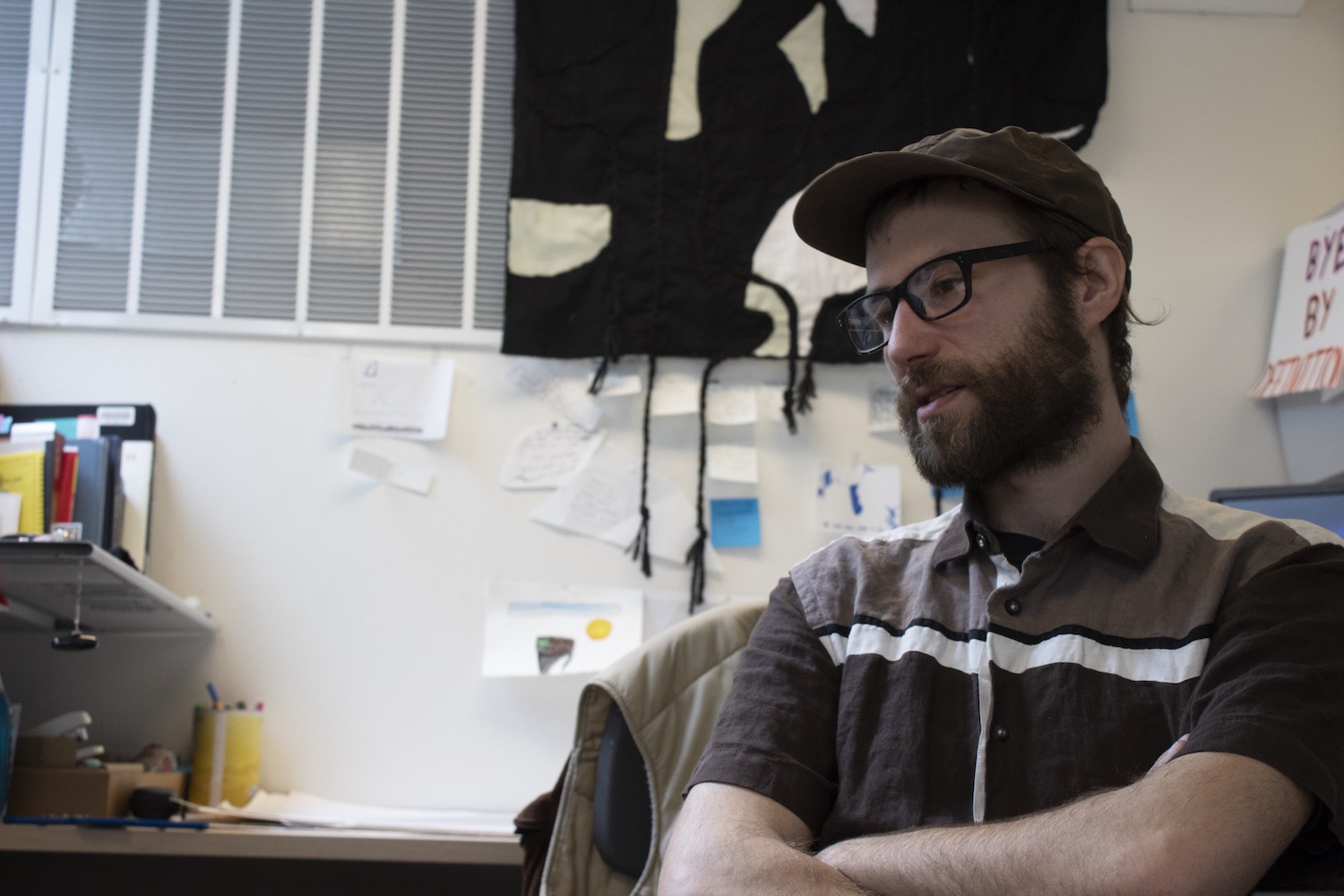 Olly Moore in his studio, whose walls are covered with past work, aphorisms, and philosophical concepts he hopes to absorb into his languages. Photograph by John Lane.

DL: Do you ever worry that someone would use it for evil?

OM: [laughs] Yeah, for sure. But I think the more diverse that the languages can become, the less likely they are to produce evil. I think it’s when things get too one-sided that evil tends to come out.

DL: So is this your main project?

OM: This is the most current work. I would say this is my favorite language I’ve discovered.

DL: And you made all of these materials?

OM: Yeah, so now I’ll explain how this works. The system I’ve been using is a center-out reading. So you start in the center and read spirally, and also fractally. For each mark, if it rotates, it doubles. So one rotated doubles to two, two to four, four to eight. Through all the combinations of these marks, you can create exactly sixty-three numbers, and none of them double.

DL: So each line rotating doubles, and each image rotating also doubles.

OM: Right. So you can image this one, which is seven, derived from four, two, and one. If the image itself rotates, you automatically know that it’s related to the number seven, and it’s doubled, so it makes fourteen.

OM: They have almost no relationship. If you rotate it again, you’ll know that it’s fourteen, doubled, which is twenty-eight. So you can see the relationship between the quantities, and between numbers in general. 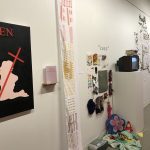 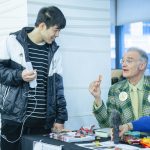