Speaking Truth to Power in “Talking to Action”

Political art from across the Americas at SAIC’s Sullivan Galleries. 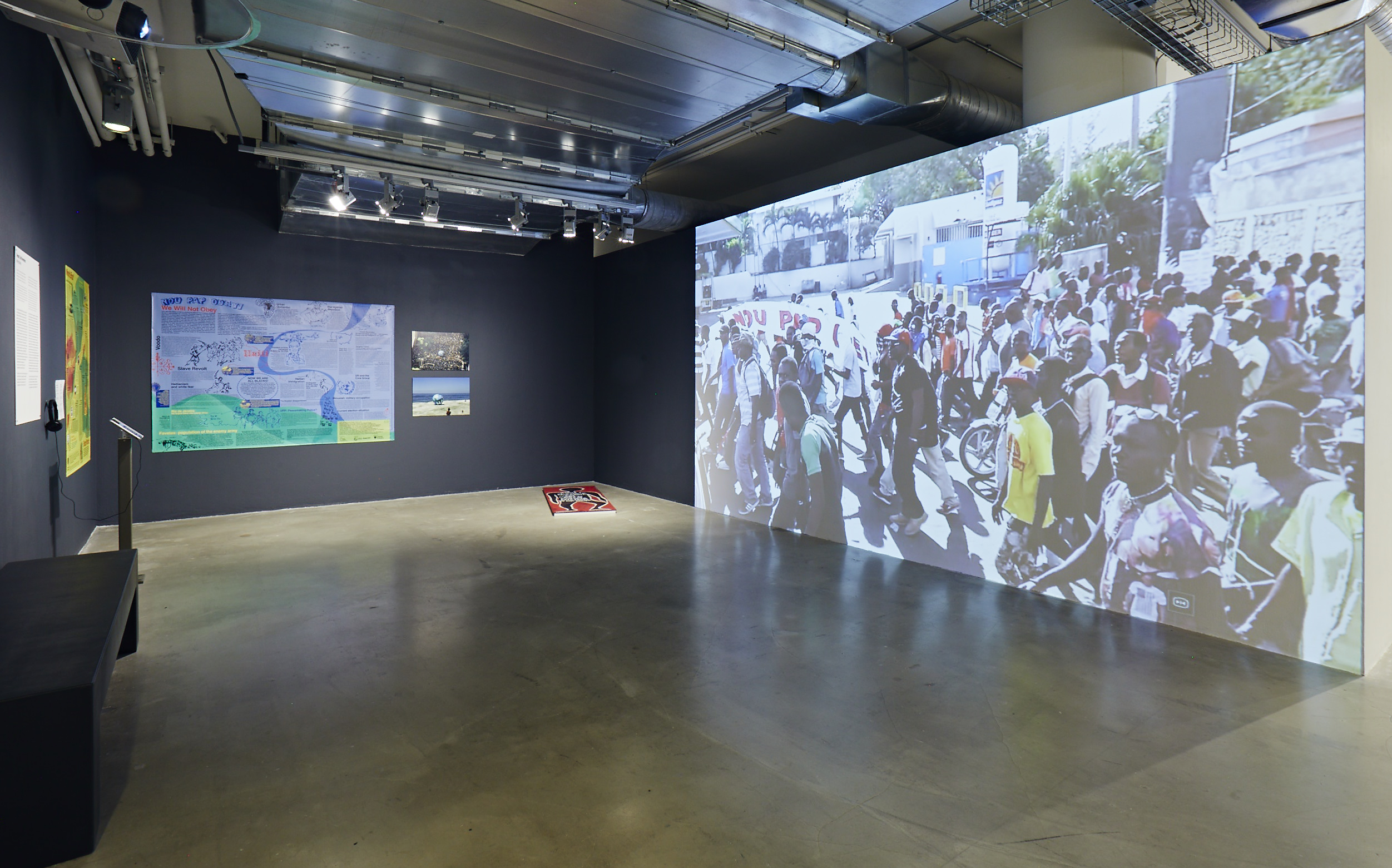 In the labyrinthine turns of the School of the Art Institute of Chicago’s (SAIC) Sullivan Galleries, “Talking to Action: Art, Pedagogy, and Activism in the Americas” features just over 20 Latinx artists and artist groups in a broadly scattered exhibition of educational but difficult-to-follow content regarding community organizing in the Americas.

In this show, which is on view through December 8th, much of the work on display consists of documentation of social practice projects. For instance, Frente 3 de Fevereiro’s documentary “Nou Pap Obeyi [No Vamos Obedecer / We Will Not Obey]” is accompanied by infographics, photos, and maps on Brazilian military presence in Haiti, which reveal the artists’ extensive research and use of social experimentation. Mostly orange, yellow, green, and blue, the text-heavy signboards display titles like “International Organized Crime – Drug & Arms Trafficking” and “The stereotype of the young, poor, black criminal.” The exhibition also features a map by the Iconoclasistas — a group that hosts community cartography workshops across Europe and South America. As with the work of Frente 3 de Fevereiro, the Iconoclasistas’ documentation of socially engaged pieces is difficult to follow in the context of a gallery. 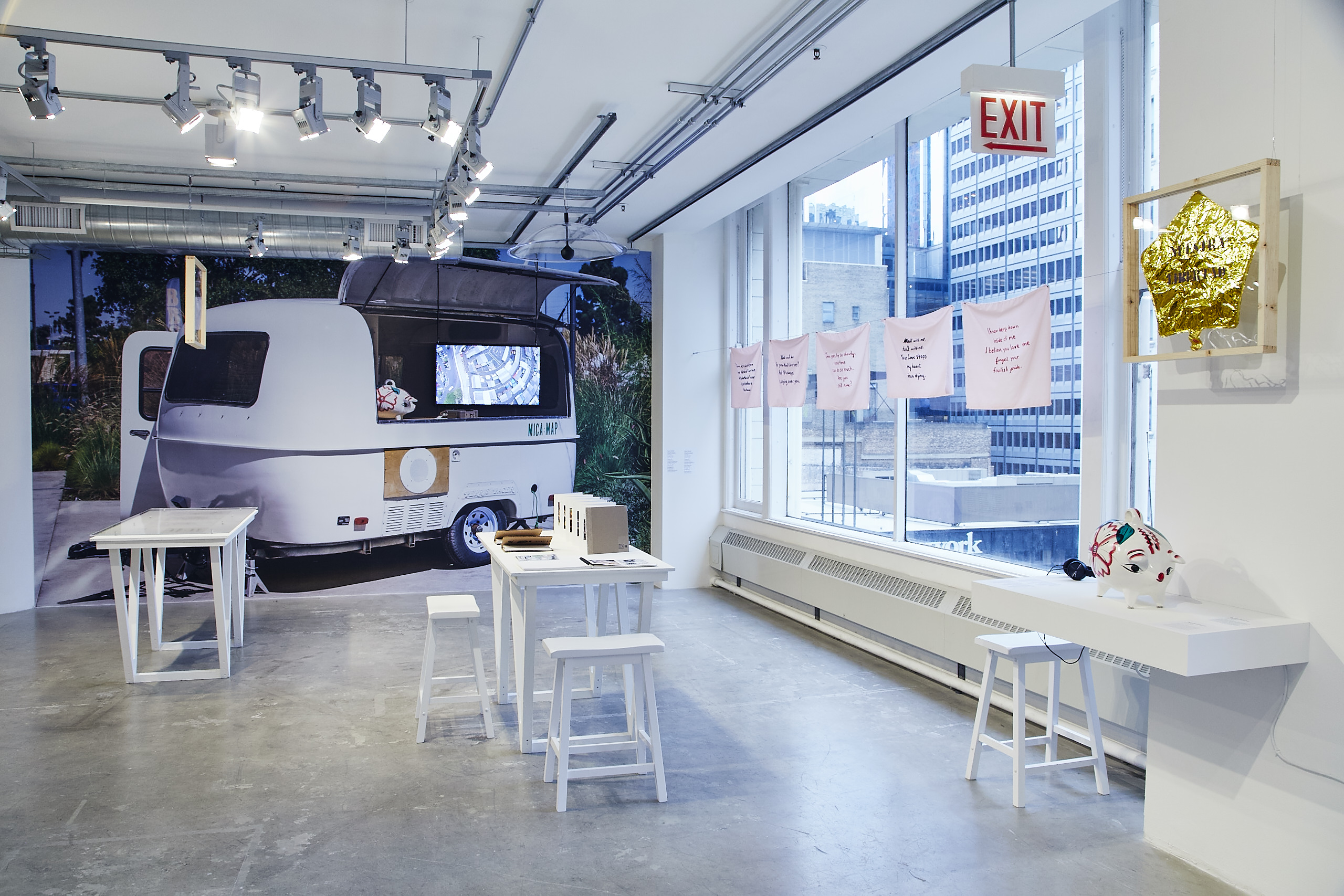 However, within the rambling assortment of documentation are hidden gems providing much more than straightforward reports on social phenomena. The Cog•nate Collective — an interdisciplinary group of artists who work with Mexican and American communities by the border — researched citizenship along the Tijuana-Los Angeles region. Their series of projects were presented with each member’s creative contribution in mediums ranging from radio sequences to banners and zines, in addition to a video documentation of the collective’s camper being used as an exchange platform. An entire wall of this corner of the gallery is filled with a photo of the camper, a framed balloon that says “PEACE” (which also appears in the video “Balloon March”), and a banner of rectangular, lavender cloths with handwritten messages such as “I know it’s hard for you because it’s hard for me and the darkest hour is just before the dawn.” Maps, slightly damaged by burn marks, are displayed on a table with the words “¿Cuál es tu América? / Which is your America?” as the heading. These were part of a participatory event in which passerby threw bang snaps, a type of miniature firework, at the map that best represented their idea of America. Together, the heading and the distressed maps evoke the threats faced by immigrant communities. 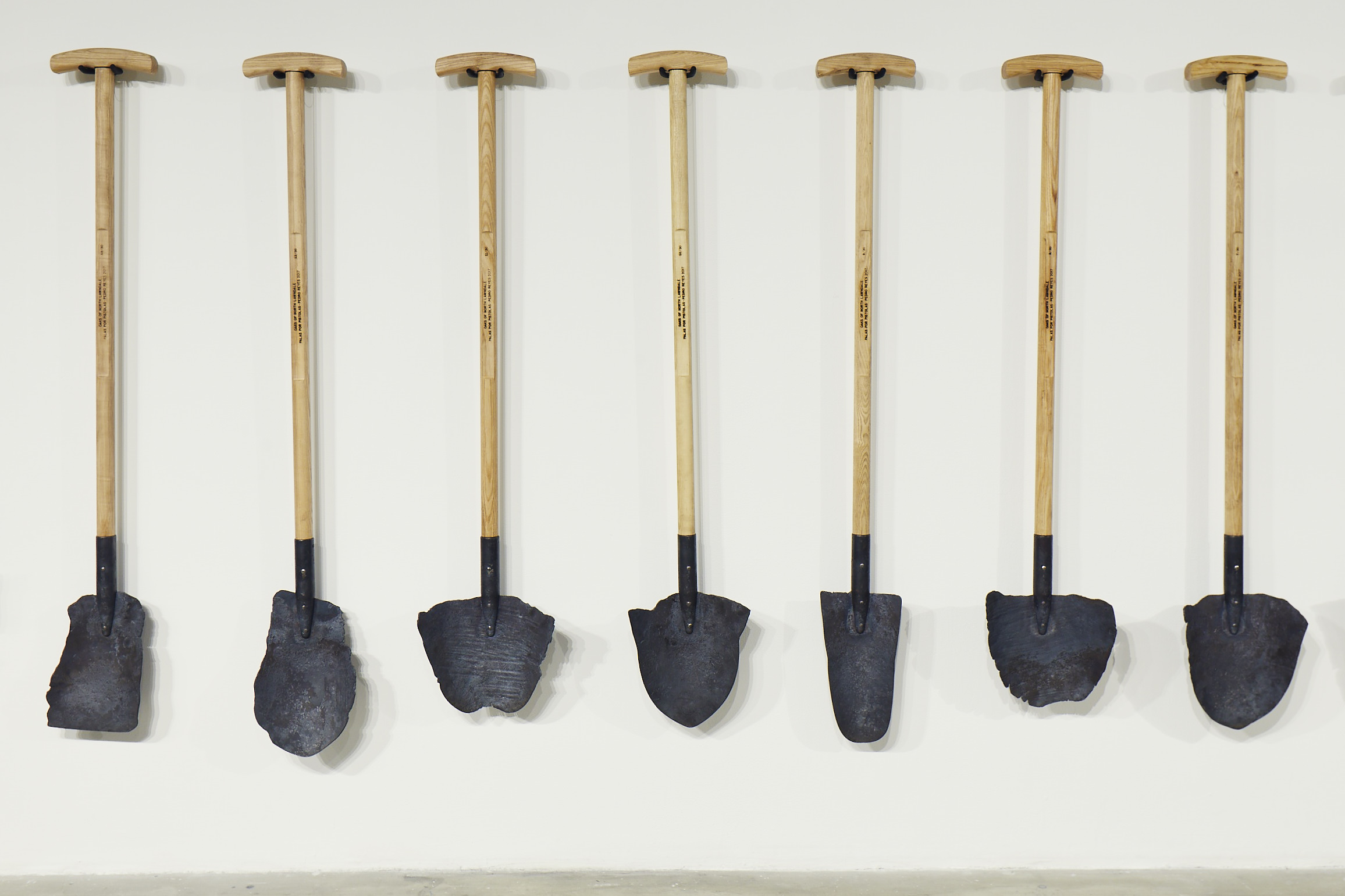 Likewise, Pedro Reyes’ melting and reshaping of weapons into unique shovel blades was both skillful and a meaningful act of community engagement that was symbolic of a larger idea. Titled “Palas por Pistolas [Guns into Shovels],” Reyes’ project began in 2008 when he collected guns from residents of Culiacán, Mexico, where gun-related violence is one of the highest in the country. The donated guns were then melted into shovel blades. Later, the Reyes melted police-confiscated guns in Chicago into 30 shovels, which were used to plant trees in Chicago’s Homan Square. “Reyes conceives of this entire process as a transformation of an agent of death into an agent of life,” the wall text states. A community celebration that the planting culminated in manifests this transformation in action.

“Talking to Action: Art, Pedagogy, and Activism in the Americas” is curated by Bill Kelley, Jr., Curator and Lead Researcher with Karen Moss, Consulting Curator. “Talking to Action” is organized by Ben Maltz Gallery at Otis College of Art and Design as part of “Pacific Standard Time: LA/LA,” and managed as a traveling exhibition by Independent Curators International (ICI). The exhibition and tour are made possible, in part, with the generous support of the Getty Foundation, PST: LA/LA presenting sponsor Bank of America, the ICI Board of Trustees and ICI’s International Forum.

The presentation at SAIC has been organized by the Department of Exhibitions curators Hannah Barco and Trevor Martin with Graduate Curatorial Assistants Almudena Caso Burbano (MAAE 2019) and Carlos Salazar Lermont (Dual MA 2019).  Exhibitions at the Sullivan Galleries are supported in part by a grant from the Illinois Arts Council Agency.