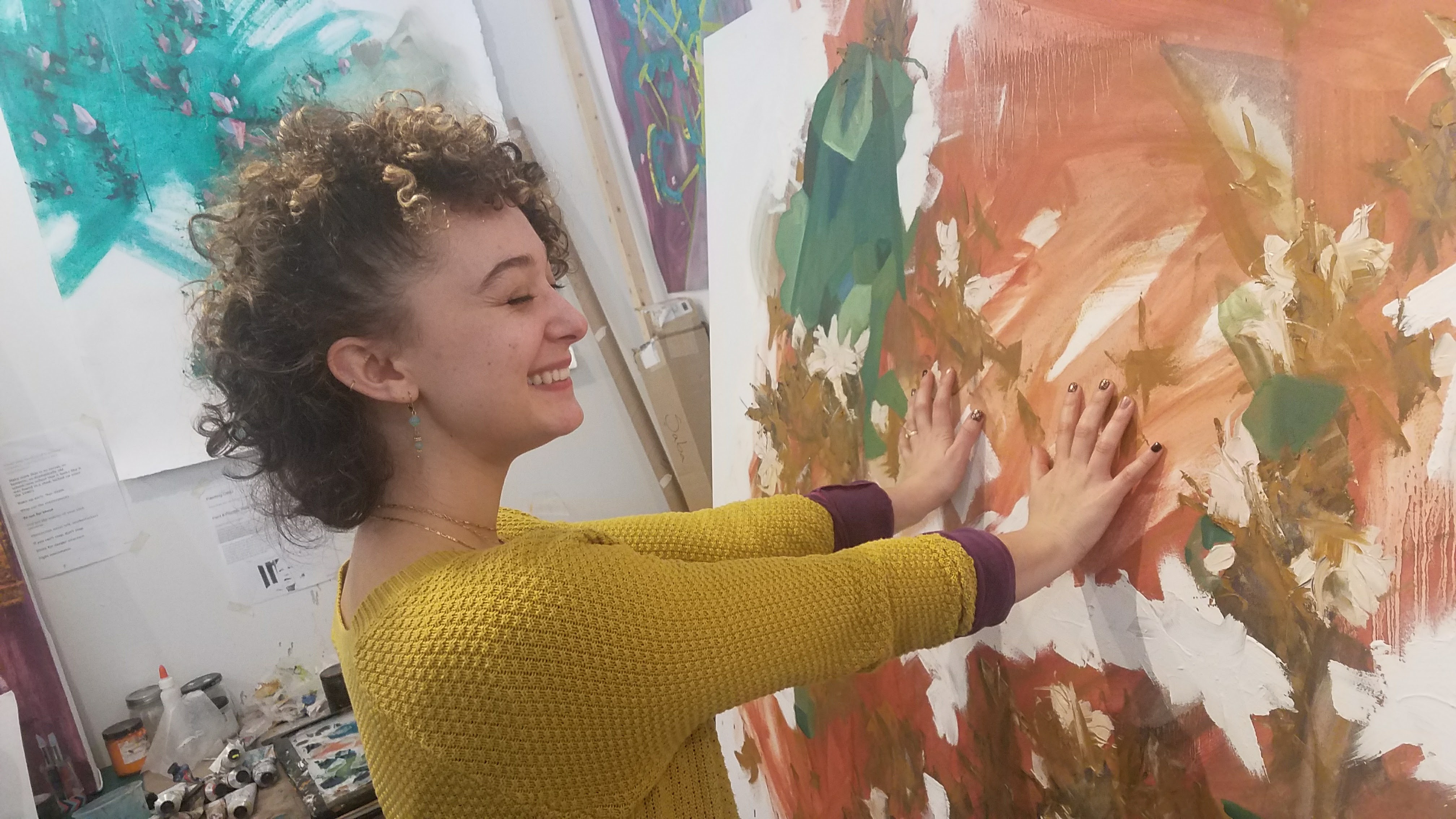 I see Saba every Wednesday, and it’s a given that there will be a project in her studio that her husband Max won’t approve of.  I’d coaxed Saba into running down to an exhibition one afternoon. Hurrying to get there before it closed, Saba, throwing off her clogs and fishing around in her “safe bucket” for her other shoe, grunted at an open can of goo on the other side of the room:

“I should probably put that away before we go,” she said. “According to Max, it’s prone to exploding.”

A post-baccalaureate at the School of the Art Institute of Chicago (SAIC), Saba’s work has been a tortoise-and-the-hare marathon between structure and movement. It has been two years since she’s been in school, and she’s gone a year without a studio, unable to expand past her figurative work in watercolor and ink — until now.

You could say the first thing Saba did at SAIC was erupt. During my introduction to her studio, Saba was smashing oils across canvas stapled to the wall with a piece of lumber that could’ve been salvaged from a shipwreck.

“I am right smack dab in the middle of five different roads I could walk and I’m not sure which voices to listen to,” she said as she smeared copious oil onto her blunt instrument. “I have to pick my own path, anyway.” 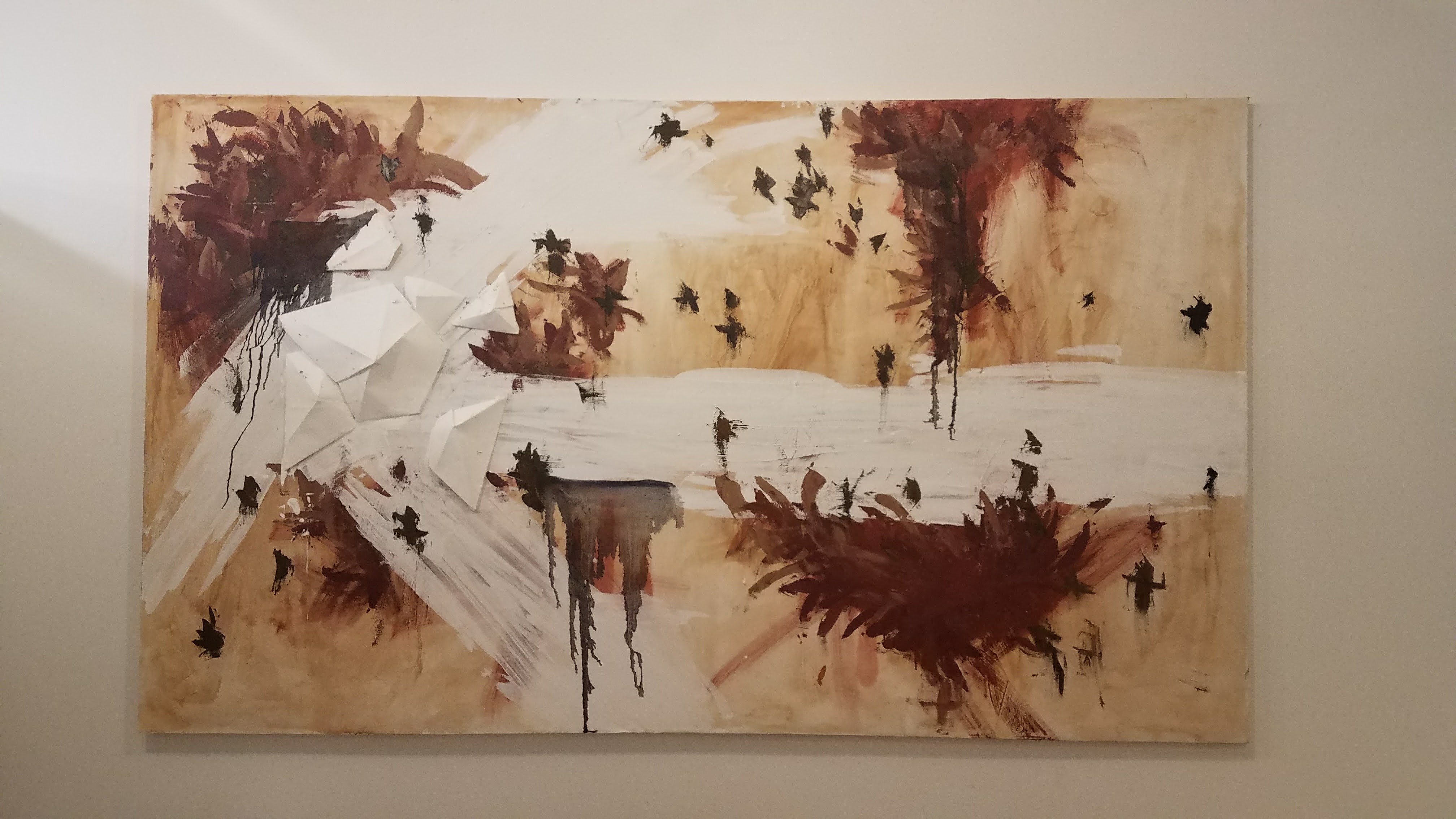 Saba is the artist’s maiden name, which she has chosen to go by since moving to Chicago from Seattle.  The youngest of three siblings and the daughter of conservative parents, the artist grew up in a household that cherry-picked information from the Bible. She says this generated a lot of instability in her life and fueled the fire in her work. The struggle of movement and form in her art is a similar paradox to the emotions she holds towards her family: Saba’s art is about interpreting the world around her and finding stillness, an intersection inside the self.

Saba, draped in a splattered lab coat her father gifted her the day we talked, said she was not happy with the critique she received the first two weeks at SAIC. Her peers and teachers weren’t complimentary.

“They said [my work] was too cliché,” she said, flinging out a painted cuff towards a line of her latest work. “And they’re right — but that doesn’t mean I’m not mad about it.”

“I’m trying to get the figure in my work without being obvious,” she said, and this made me smile. How subtle can one be with a giant papier-mâché replica of oneself in the middle of their studio?

“Faces and figures are a part of my past. That’s where I started. The figure will never be separate from my work.”

Saba said she wants to detail the experience of living without painting the human body outright. She likens her approach to a skeleton, saying, “Structure contains the movement and also sets it free. I’m finding as many intersections as I can between those two forces.”

A creative being even when she’s outside of the studio, Saba also does acrobatics. A quick scan of her Instagram shows her wrapped up in silks midair holding an arabesque gesture. 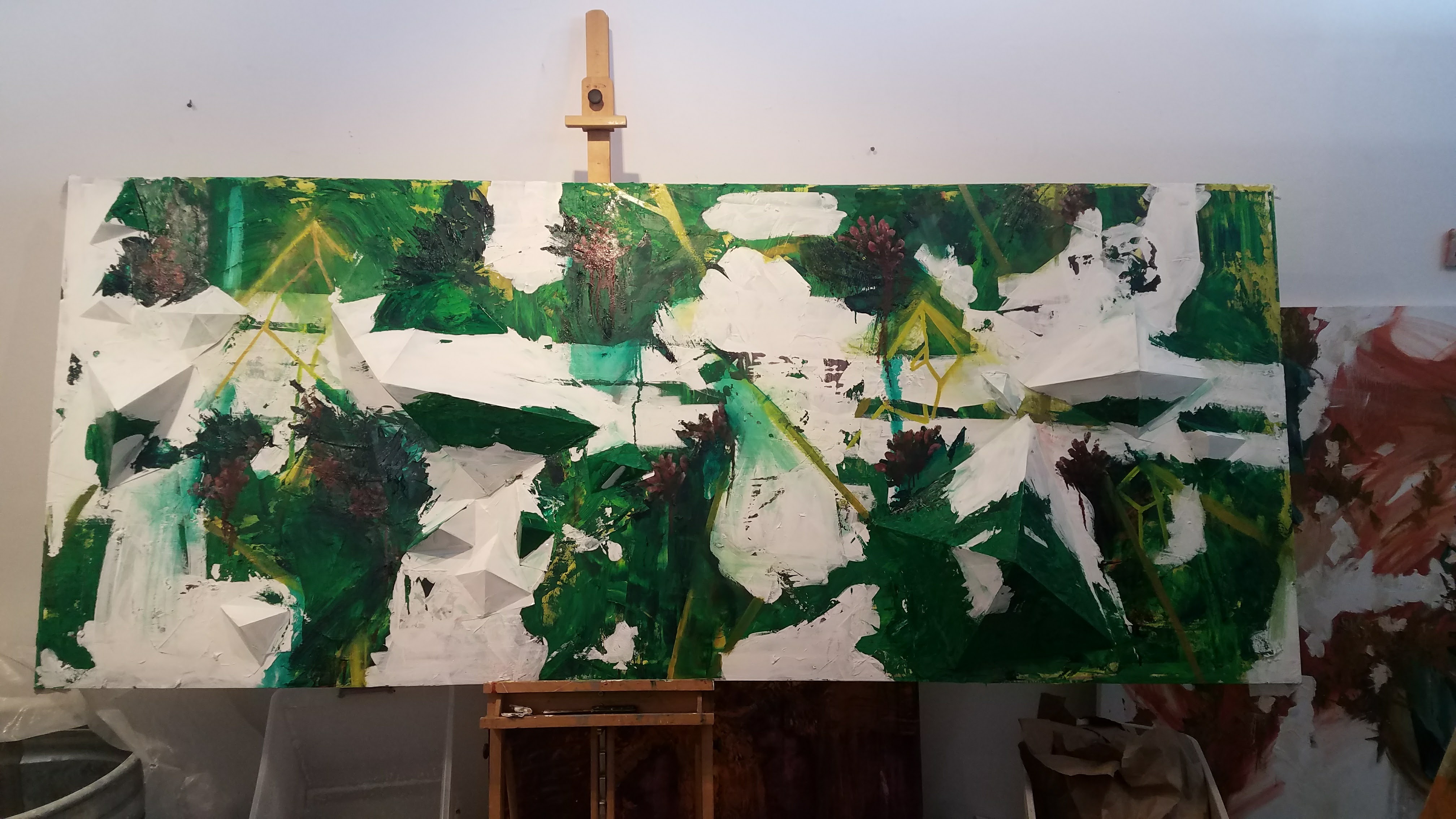 “[Dance] is a source of inspiration in my life because it’s wild, [yet] contained by our physical limitations,” she said. “The structure of dance keeps us safe.”  In all things, Saba’s art expresses this singular moment: a collision of an instance when movement is set up next to structure.

She also pulls inspiration from sculpture and botanical watercolors. Saba would be a nightmare in any colore/designo debate.

When I visited again a week later, something had grown in Saba’s work: Little floral crustaceans had appeared on a four-foot-high, dripping sea green stains, filling up opaque seams and morphing out from its boundaries. At one side, a series of cast-off neon colors were smeared up and down, then left to right, like strokes of a ticking metronome. Crystals like mountains foiled over a plaque-y white sea, as muddy floral geodes cling to their volatile surface.This most recent work instantly engendered an awareness of time and flow. My eye eagerly looked for a subject in the work — like inkblot tests – trying to divine an answer from what is inherently … nothing. Saba is visually interpreting that feeling of structure and movement while creating those imaginary spaces, but, as she said, “it has to be living.”

Saba’s been deliberating how to transfer this primordial color and sense of shape onto her very literal plaster figures. You might say the artist’s work is easy to understand; after all, everyone has conflict. 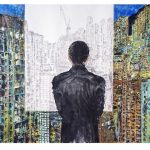 NAJ Portraits: At the Center of Wong Wai Kin’s...