Spot — and tip! — your street performers before the weather gets too cold to stand.

With Chicago temperatures looking to hover in the seventies at least a little longer, you might just catch “living statue” Athena Giles before she hangs up her gold hat for the season.

A living or “human” statue is a street artist in realistic, statue-like makeup and costume, who poses as a mannequin or statue, often for hours at a time. Most people in the Loop are familiar with these fascinating (and sometimes slightly-disturbing) performance artists.

Giles, 24, whose beat tends to be near the Art Institute, didn’t necessarily grow up with dreams of doing the living statue thing, but she has long had her eye on a life in performance. Two years ago, Giles moved to Chicago from Boston to attend classes at the Actors Gymnasium in Evanston, a circus and performing arts training center.

“I had never lived outside of New England,” Giles said, “and there’s a lot of great stuff here in Chicago. I decided to go for it.”

A friend and fellow performer had been doing the living statue thing for a while and shared with Giles how lucrative it could be, if you put in the time. Giles decided to give it a try. So far, so good: Between her statue work and ushering at Cirque du Soleil, it’s enough to pay the rent.

For a person who traffics in absolute stillness, Giles says she moves quite a bit.

“I move a lot for the fact I’m standing still,” she said. “I’m actually always doing a lot of tiny movements to see who’s paying attention. I do a lot of small motions, like winking, or I’ll move my hands.”

The small motions are the key to it all, said Giles, who, during our interview outside Pret-a-Manger, had just come off work and was in full costume: gold face paint, a gold spray-painted jumpsuit, and gold tricorn hat.

“It takes a lot of patience and waiting, that’s true, but I’m always scanning the crowd to see who’s noticing [me]. If I fool people into thinking I’m an actual statue, they won’t stop and give me money,” she laughed. “So I change position every so often. When people do give me money, I’ll do a bigger motion; for adults, I might take off my hat. If it’s a kid, I’ll give them a high five.”

Giles says the kids are her favorite part of the job; seeing the confused delight on the faces of kids when they realize “that statue just moved!” never gets old. And most kids are super into it, Giles said, though sometimes they’re a little hesitant.

“Oftentimes, one sibling will be scared but the other, usually the older one, will be courageous and come toward me, and that makes it okay” Giles said, then smiled: “Some adults get freaked out too.”

But not everyone who engages with Giles out on the street is so tentative.

“I learned my lesson last year not to perform during Lollapalooza,” she said. “I had some people get hands-y. And I actually didn’t make much money, either; a lot of people who go to concerts or big events down here aren’t carrying much cash because they don’t want it to get stolen. Holidays are when I make the most money. The Fourth of July weekend is usually really good.”

Though Giles said the tourist crowd was lighter this summer, the street performance gig is satisfying in many respects. The community is a perk, for example: As it turns out, people who work on the streets as performers (and otherwise) look out for each other.

“A lot of [statues] have regular spots,” Giles said. “Some people set up on the Mag Mile and there’s lot of money up there but you have to be better, more aggressive. I know a lot of those performers and we’ll stop and chat. They’re really nice. And I’ve made friends out here, too. There’s one lady who sells bottles of water to tourists, she’ll always gives me one for free.”

Zen and the Art of Standing Still

When asked if she ever slips into a kind of meditative state, standing so still for so long, Giles shook her head.

“No, I wouldn’t describe it like that. If I go into some ‘zone,’ I’m not going to be making any money because I’m not engaging,” she said, though it’s really about balancing stillness and engagement. “If you try to make contact with everyone, you won’t make contact with anyone, so you have to find who’s already noticing you.”

And you can notice Athena, either in her gold pirate getup or in her namesake “Athena” costume (which she wears less, since the skirt is hard to walk in) as long as the weather holds.

“I work from about the first week in April until it gets cold, which is around 60 to 65 degrees. This [gold] costume is good because I can wear a shirt and leggings underneath.”

Look for Athena Giles as she takes the ‘L’ downtown, which, by the looks of her Instagram, is probably pretty fun for those riding in the same train. But it’s more likely you’ll catch her in front of the Potbelly’s across the street from the Art Institute, or in front of the Seven Lions restaurant near the Walgreens on the corner of Michigan and Washington.

If you want to get photos of more than one statue at a time, Giles says she and her fellow performers (two of which are her housemates) set up on the east side of Michigan at Monroe — in the statue garden, of course. 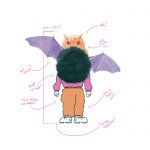 A Cryptid for Our Times: Let’s Talk Mothman, Chicago 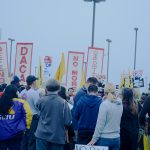