A Shameful History: ‘Then They Came For Me’ at Alphawood

Alphawood remembers the unlawful incarceration of Japanese Americans in an original — and successful — exhibition.

“Mama, I want to go back to America,” said a young girl upon arrival at the Tanforan Detention Center in San Bruno, California. At Alphawood Gallery’s latest exhibit, “Then They Came For Me,” we learn the young girl was one of 120,000 American citizens and legal residents incarcerated by the U.S. government during the Second World War.

“Then They Came for Me” is an exhortation to all Americans to remember the many injustices brought on by the incarceration of Japanese Americans, and to remember that it could happen again if we fail to cultivate vigilance and empathy. “Then They Came For Me” is the first original exhibition mounted at Alphawood and was created in partnership with the Japanese American Service Committee (JASC). The exhibition consists of hundreds of photographs from Dorothea Lange, Ansel Adams, Hikaru Iwasaki, and others; video footage of interviews with former detainees; personal objects; documents; and other historical materials. It’s designed as a narrative journey, beginning with the climate of racial intolerance in the decades before Roosevelt’s controversial Executive Order 9066, which authorized the forced removal and imprisonment of the Japanese American population across the West Coast.

The photographs, artwork, and objects take us through the lived experience of the detainees, which involved forced migration, their attempts to establish normalcy in the camps, and the eventual resettlement throughout the United States. Through the thoughtful yet uncompromising collection, the exhibition reconstructs a historical moment in both individual and collective terms. It communicates the period’s countless iniquities, as well as the many quiet victories of the detainees.

The personal objects and documents that belonged to the detainees form the heart of the exhibition. A pile of luggage — on which the owners carefully stenciled their names — dominates the main foyer of the exhibition, a sobering reminder of how in the weeks leading up to their deportation, Japanese-Americans were forced to sell all the possessions they couldn’t carry, often for pennies on the dollar. A Russell Lee photograph, “Los Angeles, California (April 1942)” shows two white farmers examining the vacant tractor of a Japanese-American farmer, presumably for the taking. There is no compassion, only opportunism.

The exhibition also traces the journey of the detainees from their temporary lodgings to more permanent internment camps across America, including the Minidoka and Heart Mountain camps, which together housed approximately 23,000 detainees in and around Idaho and Wyoming, respectively. The Minidoka camp is now commemorated as a national historic site; Heart Mountain was made a landmark in 2007. The examination of the more permanent camps shows the struggle for normalcy the detainees experienced: They organized sports, set up schools, worked for a pittance to support the war effort, and even published high school yearbooks.

Contemporary art finds a place within the exhibition both as a response to the incarceration and as a way to convey daily life in the camps. For example, visitors are offered blown-up excerpts of Mine Okubo’s “Citizen 13360,” an autobiographical graphic novel. One particularly memorable set of panels conveys the indignity of life in converted horse stables during the forced migration.

The experiences of fringe groups are not overlooked here, emphasizing the care the curators have taken with “And Then They Came For Me.” There are stories from smaller camps, as well as information regarding the unfortunate experience of several thousand Japanese-origin Latin Americans who were unfairly extradited to the United States, then deported at the end of the war.

The exhibition is also courageous enough to make an explicit connection between the incarceration and contemporary politics. A public art piece, “Future Internment Camps,” by Plastic Jesus, mimics an official notice and alludes to Executive Order 9066, but attributes it to the current administration instead of Roosevelt. The documentary film, “And Then They Came For Us,” by Abby Ginzberg and Ken Schneider, is screened daily within the exhibition, and draws a direct link from the incarceration to the discrimination faced by Muslim-Americans after 9/11.

Chicago is a fitting site for such an exhibition: A large number of Japanese Americans were resettled on the city’s near north and south sides after the war. It was particularly gratifying to see a letter from the School of the Art Institute of Chicago (SAIC) accepting a former detainee into the class of 1943.

As Alphawood Gallery’s first-ever original exhibition, “Then They Came for Me” is an extraordinary marker. To journey through the collection is to experience history through art, to feel it as though it were happening today. The show carries an urgency that suggests its curators felt it necessary to remind us of a dark chapter in American history, not just for the sake of those who suffered while it was happening, but for our own sake, now. It’s heartening to see galleries like Alphawood putting in the effort.

Arts & Culture A Shameful History: ‘Then They Came For Me’ at Alphawood
« Previous Story 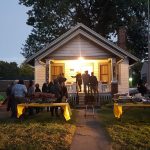 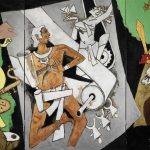