The Fabric of an Artwork: ‘A Sag, Harbored’ at Western Exhibitions

A group show at Western Exhibitions begs the question: “Who wore it best?” 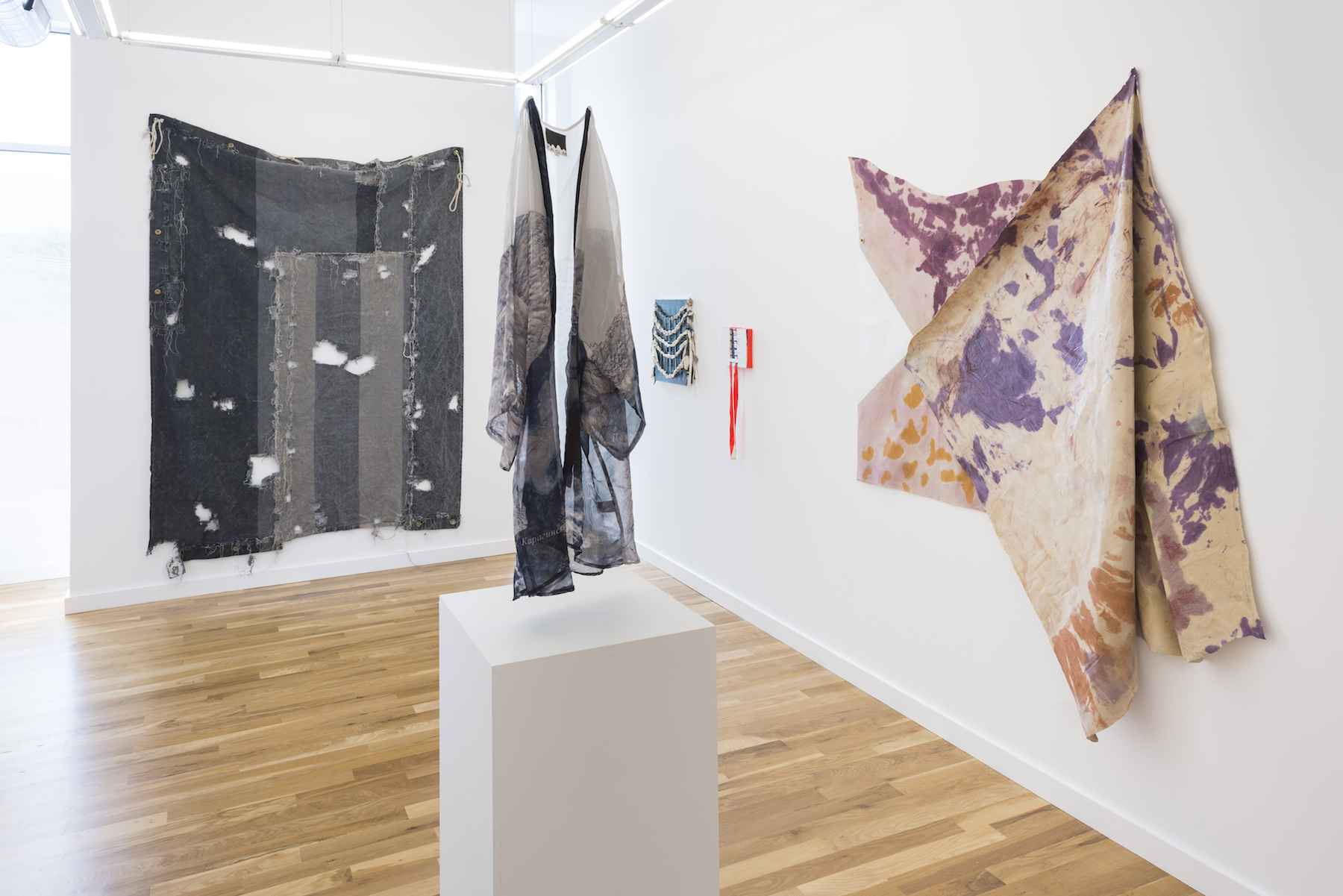 Envision a party where every girl has shown up in the same dress, only in different colors. The reception of such an event could be an absolute tragedy, but what if rather than a social faux pas, the outcome is a hardy, collective laugh over an earnest attempt to stand out with the inevitability of shared sources?  So is the theme of the most recent show at Western Exhibitions, “A Sag, Harbored,” encompassing fashion and the repetition of forms.

The centerpiece of the show is an untitled bronze by Michelle Grabner, which inspired the motif of the exhibition, according to the gallery’s press release. The effect of hard, frozen drapery is a tale as old as time, apparent in the sculptural stone details of the city’s architecture; the intricacy of the crochet weave and tassel elements of Grabner’s sculpture, however, has a more quotidian feeling, like a tea cozy wove with love. For this to be memorialized in metal elevates the fiber work being referenced, a monument to something soft and made in time with care.

The spindly hangings of Rachel Niffenegger reference the body, but also the extra-bodily with works’ names such as “Spirit Slippage,” “Cartilage Mood Cage,” and Eva C’s “Nipple Ectoplasm.” The physical manifestations of paranormal presence appear as white-washed exoskeletons of string and epoxy holding up the quintessential ghost’s sheet, dabbed with moldy stains of dye. Their fragile appearance and the variety of dye and transfer techniques on fabric show a striving for representing what is generally unseen, but always felt.

Many of the works reference the fashion industry directly. The wall-encompassing “Stripe Patch (Selvedge),” completed in 1988 by Holt Quentel, points to the superior category of denim whose finishing and fade allows for a particular longevity. While this work is acrylic on canvas, its appearance is that of patchwork fabric scraps in varying shades of gray, with frayed stitching and moth-worn holes. Like the weather-beaten flag of a nation unknown, Quentel’s work seems to expose the fallacy of fashion’s eternal promise while embracing the age and wear we’ve come to expect from it. 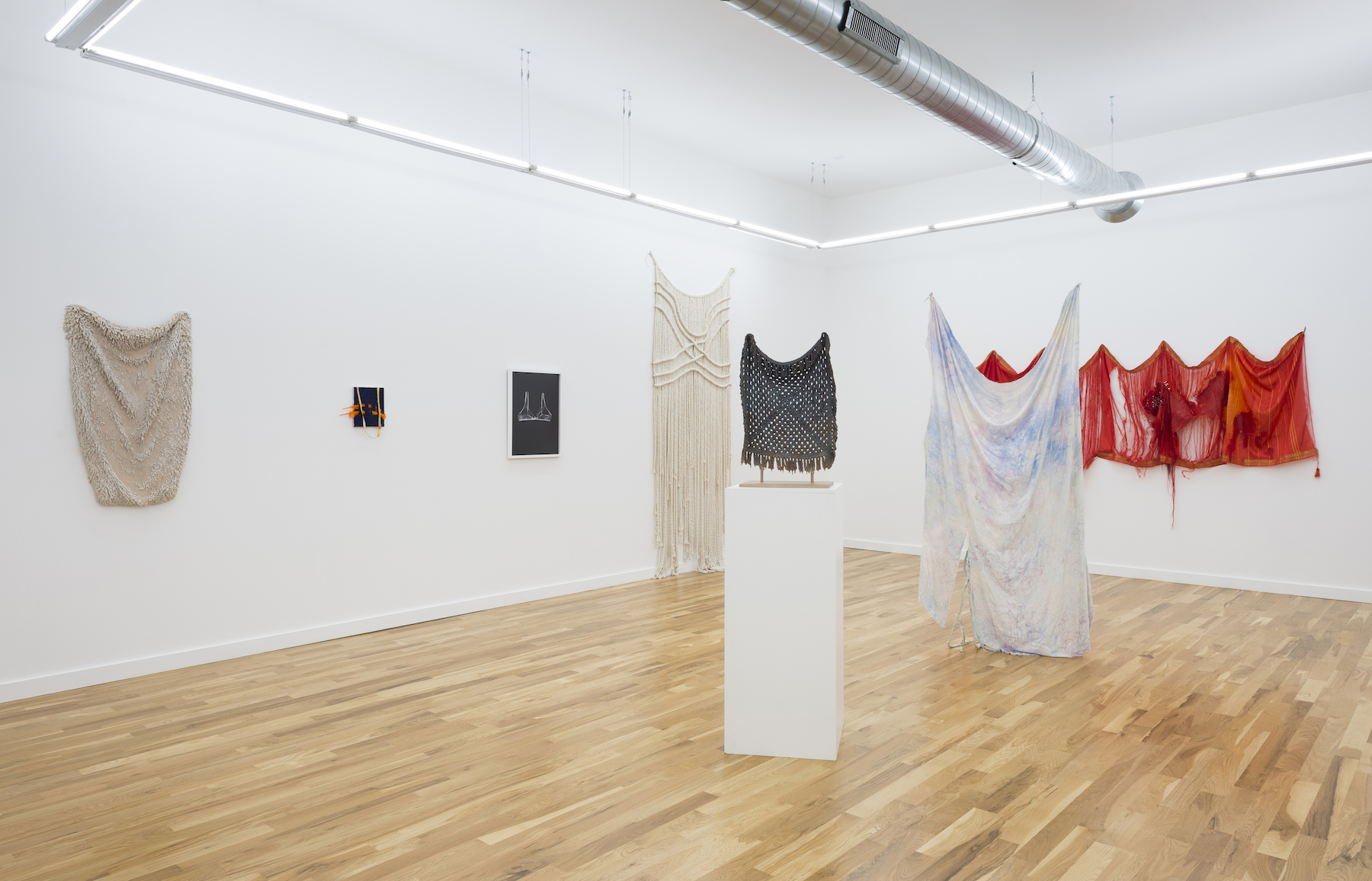 The show also serves as a reference to cultural identity, as in “Exclusive,” an expansive multiplicity of drapes by Preetika Rajgariah. The work is composed of a length of red sari, embellished with bindis and kumkum, the turmeric-based colored powder used in Indian ceremonies. Some parts are distressed with bleach, tearing and thread, an emphasis on a particular experience of womanhood presented in the narrative of the fabric’s surface.

Elizabeth Claffey’s “Matrilineal #6” and Kate McQuillen’s “Boxcutter III,” a print made four years earlier, could not be better paired for such an exhibition; they each present women’s undergarments in white against a stark black background, like an X-ray. Claffey’s study of a brassiere and McQuillen’s of a gossamer teddy are like fraternal twin sisters, each artist’s nearly-identical study of the structure of feminine garb coming to similar conclusions.

A framed page from Nicholas Frank’s “Biography” highlights the show’s overarching theme of “who wore it best” in a similar comparison of photos: One of Frank’s performances, and a visual from Beyoncé’s music video for her song “Ghost,” in which bodies are enveloped in stretched fabric. The tawdry nature of tabloid fodder is elevated to a suggestion of authenticity, while also making fun of the often-disparate comparisons between “fine art” and popular culture. The relationship between such a common trope, as is presented in the whole of the show, is symbiotic and endless in its possibilities.

The range of materials exhibited goes beyond the normal expectations for drapery: From Molly-Zuckerberg Hartung’s use of painted leather, Silva and Tate’s polyester chiffon, Dan Gunn’s linked plywood, and even the silicon-lacquered bathmat of Amber Cobb’s “Held, Hugged and Stroked,” the sculptural materials run the gamut and provide the diversity needed for such a specific curatorial theme.

Highlights from the exhibition include the two photographic prints by Paul Mpagi Sepuya at the entrance, which feature glimpses of men’s bodies and their tension with the drapery of the artist’s studio walls. (This is discussed eloquently in Wayne Koestenbaum’s essay “Eric’s Stubble.”)  The studio backdrops presented in both works champion the peripheral matter of the photographer’s workspace, without letting the viewer forget that man set up the environment; it’s all a construction.

Other standouts include the mixed-media paintings of Gyan Shrosbree, “With a Feather,” and the paired “Five Braids” and “With a Loop,” which are at once delectable and pathetic.  With elements like a craft store feather and crests of glitter, these small scrappy works waste not and want not with their tripe-like dips of canvas strips.

It’s easy to appreciate “A Sag, Harbored” and its commitment to the single image of a piece of fabric held up on its two sides while falling in the middle, the mixture of painting, sculpture, photography and prints serving as evidence of a constant engagement. It examines the everyday functions and form of textiles, and displays how universal such a seemingly banal gesture can be for artists of varying backgrounds and generations.

“A Sag, Harbored” is on view at Western Exhibitions through August 19th, 2017.

Arts & Culture The Fabric of an Artwork: ‘A Sag, Harbored’ at Western Exhibitions
« Previous Story 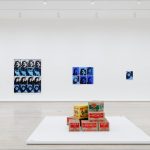 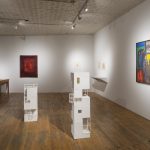