‘March On’ This: DSW’s Latest Ad Campaign Ruins My Faith In Humanity 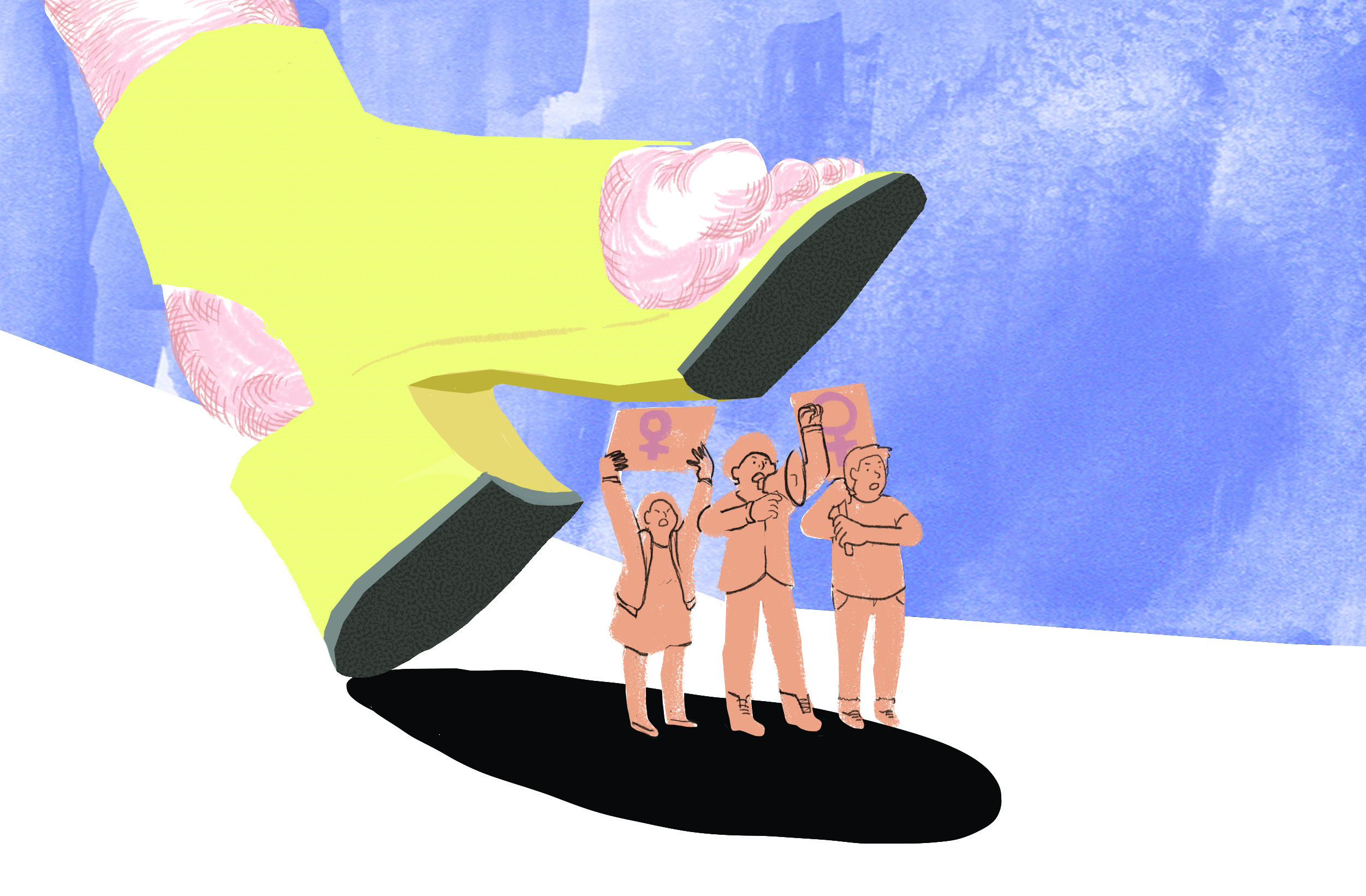 Your ex is the only person who “likes” your status update. You made your flight but your luggage didn’t. A psychotic orange bigot holds the most powerful office on the planet. Life is hard. You know who gets it? Designer Shoe Warehouse (DSW) gets it. They get you, girl. You.

That’s what the latest DSW ad campaign is trying hard to convince you of, anyway.

If you’re a student at the School of the Art Institute of Chicago (SAIC), you have surely seen the DSW ads all over the Loop. In case you’ve somehow missed these ads plastered on practically every bus stop, trash can, and subway wall on what is our downtown campus, I’ll describe them for you.

The campaign features brightly colored, individual portraits of attractive, 20-something models in agreeable outfits. Their faces express annoyance, confusion, bemusement, and various other emotions that fall primarily into the “Meh” or “#irony” category.

It’s an unusual strategy, putting unhappy people in an advertisement; thankfully, DSW’s copywriters have provided text to help us understand what the national shoe store chain is trying to communicate. Here are a few examples of the copy that attends the portraits:

“My ex is the only person who liked my selfie.” #MarchOn

“I remind him of his mother.” #MarchOn

And my personal favorite, which I shall discuss in more detail:

“He said women belong in the house. I said yep. And in the Senate.” #FML #MarchOn

Let’s set aside that DSW is all but deploying the word “fuck” in their ads; “FML” being short for the not-that-popular-anymore internet phrase, “fuck my life.” I actually kind of like that they went there.

No, it’s the #MarchOn stuff that I take issue with.

That last example I gave features a perky — I mean that in both senses — light-skinned girl in a t-shirt emblazoned with the slogan, “THE FUTURE IS FEMALE,” just in case you were not aware that with its “MarchOn” hashtag DSW is trying to align itself with a certain political ideology. That political ideology, one that that would, for example, march in the Women’s March. Or perhaps in a Black Lives Matter march. Any march, really, as long as it was cool. DSW would vote for Hillary, but not Trump. They would be against the Muslim ban. DSW is liberal, I think, is what they’re trying to say. (One wonders if the same campaign is running in suburban Omaha.)

I resent this advertisement. Not as a liberal. (I’m a moderate, anyway, not that it matters.) I don’t resent the ad as a feminist. Nor, even, as a woman. I resent the DSW ad campaign as a citizen of the world who, in the face of calamity, decay, and injustice, tries to comport herself with a modicum of dignity and respect and when any ad campaign co-opts a political movement to sell anything — discounted shoes, in this case — I feel that all my greatest hopes, fears and convictions are but grist for The Mill, empty fodder for “the uncaring, rented world,” as poet Philip Larkin put it.

Put another way: Ad campaigns that use political movements to sell things make me feel like someone just grabbed my pussy.

DSW certainly isn’t the first to get politically zeitgeist-y in an ad campaign; we have had to endure this kind of thing for years. In 1968, hoping to sell more cancer sticks to chicks, Virginia Slims-maker Philip Morris pivoted from its usual women-oriented sales angle (“Smoking keeps you thin, ladies!”) to adopt a more “You go girl” approach, famously crowing, “You’ve come a long way, baby.”

The campaign, which ran for no fewer than three decades, featured foxy models sneering or looking smug while somehow also appearing post-coital, always with cigarettes in hand. The copy that ran alongside their taut bodies said things like, “We make Virginia Slims especially for women because they are biologically superior to men.” Or, “When he offers you a low-tar cigarette, tell him you’ve got one of your own.”

Die. Die! Untold billions of females toil, generation after generation, in obscurity, oppression, and silence and then, when a precious few of us in a tiny corner of the globe manage to claw our way to the top despite the patriarchy, what do we get? We get Madison Avenue ad execs laughing all the way to the bank as they turn our blood, sweat, and tears into a tool for slinging their toxic crap. Foul. Foul, I say!

There’s another example of this particularly heinous advertising strategy in the late 1990s, when Apple computers launched the “Think Different” campaign, much to the chagrin of English teachers everywhere. (You could just hear all of them — and my mother — wailing, “It’s ‘Think differently’! With an L-Y!”)

The Apple campaign paired this grammatically dubious “Think Different” slogan with black and white photographs of time-honored visionaries such as the Dalai Lama, Pablo Picasso, and Amelia Earhart. I was in high school when that campaign hit; I remember thinking, “Pablo Picasso is dead. How can he agree to be in an ad for Apple computers?” — which was my 16-year-old brain’s way of working out that I didn’t like people blatantly co-opting Grand Themes to sell me stuff.

Look: Modern advertising strategy relies entirely on the manipulation of human beings’ emotions. Every time you see a sad kid, a basket of puppies, a proud dad, Santa Claus, magic, thunder and lightning, wistful looks, or a high-five in an ad, you’re being messed with, very much on purpose. When you hear music of any kind — a thumping house track, swelling strings, The Ramones, anything — that’s the ad people trying to get you to feel a type of way and confer those feels onto the kind of cookie, car, or catheter system they’re selling.

Most of us know when this is happening; some of the time, we actually remember to resist the wiles of the relentless advertising industrial complex. And resisting those strategies is important, seeing as how not everything you’re being sold is good for you (see: cigarettes, Taco Bell). When you start to feel like you really need that new car, you can remind yourself that Honda is pandering to your emotions and walk on by — and you can get better at discerning the subtle emotional manipulations in advertising the more you practice. You really learn to coexist with an industry that wants every dollar you have (and every dollar you can charge to your credit card).

But when companies so obviously latch their tentacles onto our ideological convictions to boost sales, as in the case of DSW’s “#MarchOn” campaign, I am compelled to do more than roll my eyes at the advertising industry’s dark arts. Better that I speak up about it, if I’m able; better that I use the occasion to loudly object to an industry that doesn’t care who I am, what I’m about, or what’s good for me, as long as I’m buying what they’re selling. You’re welcome, DSW.

Postscript: Not long after I turned in this piece, Pepsi debuted an ad starring Kendall Jenner so utterly tone-deaf in its use of Black Lives Matter-esque protest imagery, the entire internet revolted. The ad has been pulled and Pepsi has issued an apology. 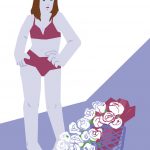 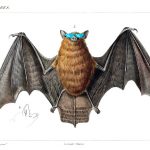 One Response to ‘March On’ This: DSW’s Latest Ad Campaign Ruins My Faith In Humanity