On November 18, 2008, things weren’t going especially well for me. I’d recently moved to New Orleans, LA to be a teacher, and I hated it; I’d crashed my first car (off a cliff and into a lake) while moving from Portland; my second car had exploded (seriously) in a high school parking lot; my hunky boyfriend had just broken up with me; and I’d spent enough money on cars that I no longer had any money left. When you’ve hit rock bottom, every little disaster adds tremendous insult to seemingly unending injury. 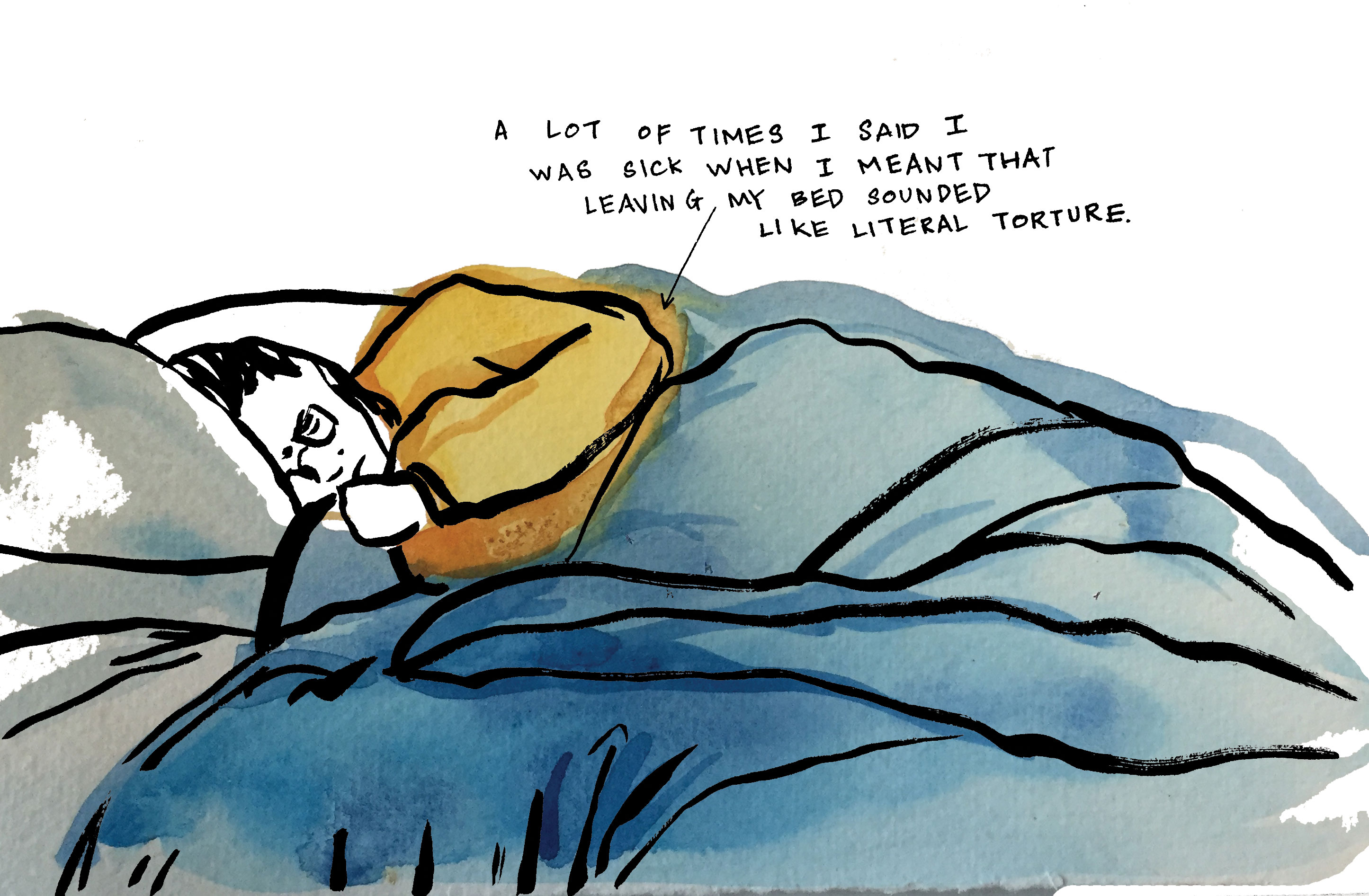 That morning, I’d spilled orange juice all over a brand new white dress (people like me should never wear white dresses, by the way), and I’d discovered that my bike had two flat tires (I never rode it, but what if I had wanted to?). I wanted to get back into bed and watch my well-worn “Spice World” DVD on my laptop — judge if you must, but the Spice Girls do improve shitty situations — however, I’d promised my friend Lynn that I’d go shopping with her at the really good thrift store across town. This place always had bizarre furniture — once I found a telephone shaped like a sleeping cat — and it was Lynn’s favorite place in the world. I’d blown her off the past four times we were supposed to go. Surly as I was, I didn’t want to add a botched friendship to the list of reasons I had to be depressed. 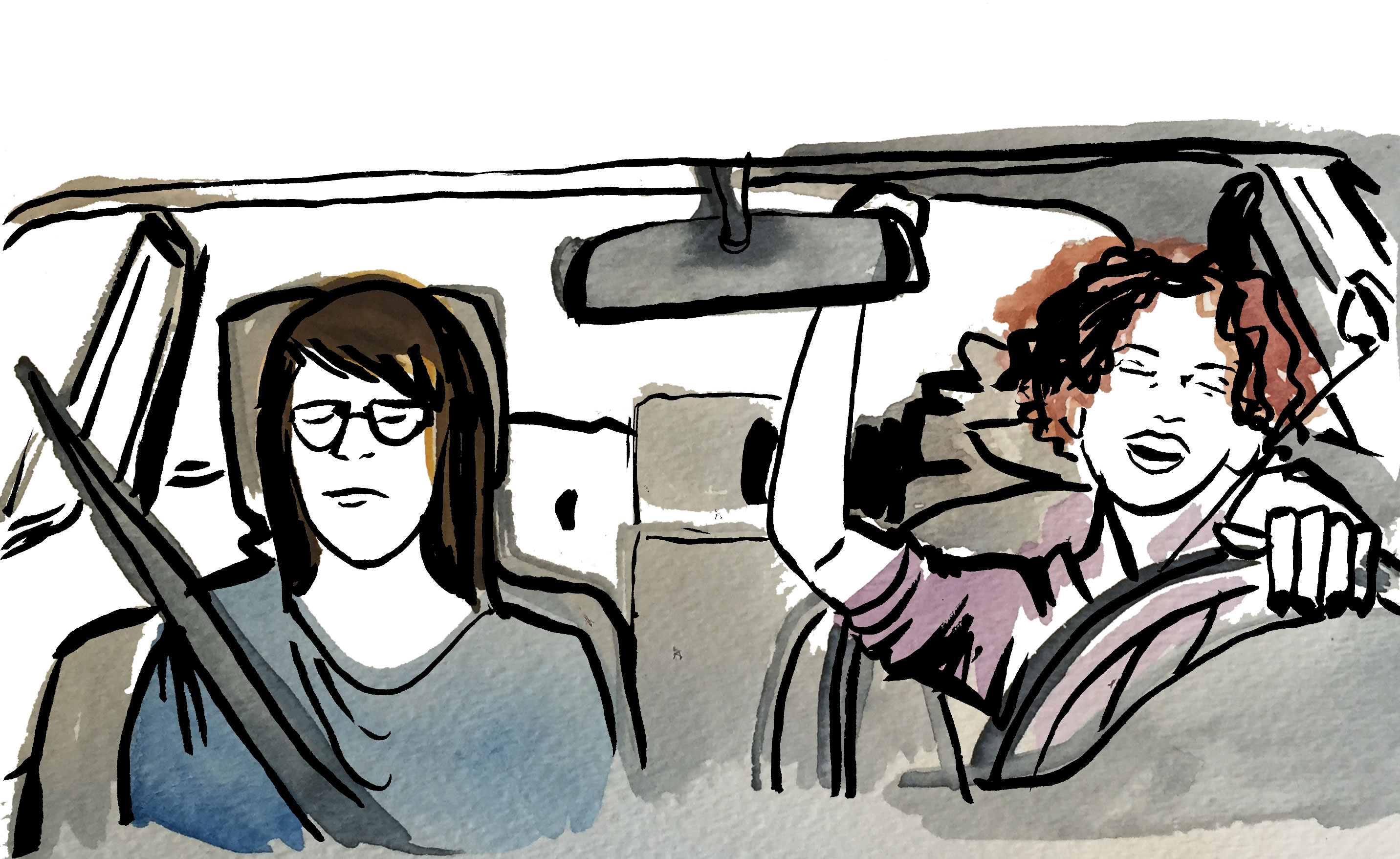 At the thrift store, Leah went off to look at blouses (blouses with yellow tags were 30 percent off! She was very enthusiastic about that), and I took the opportunity to cry alone in the bric-a-brac section. As I sullenly moseyed through the racks of cheese graters and porcelain poodles, a peculiar thing happened that I will never forget: A hardbound book fell off a high shelf and onto my left foot. At first, I felt physically assaulted by the universe (tremendous insult to seemingly unending injury); but then I picked up the book and read its title: It was an antique children’s anthology with gold plating called “Wonderful Things Happen.” I don’t really believe in signs or magic or much of anything that can’t be backed up by science, but “Wonderful Things Happen” was exactly the message I needed right then. I bought the book and put it on a shelf in my room. 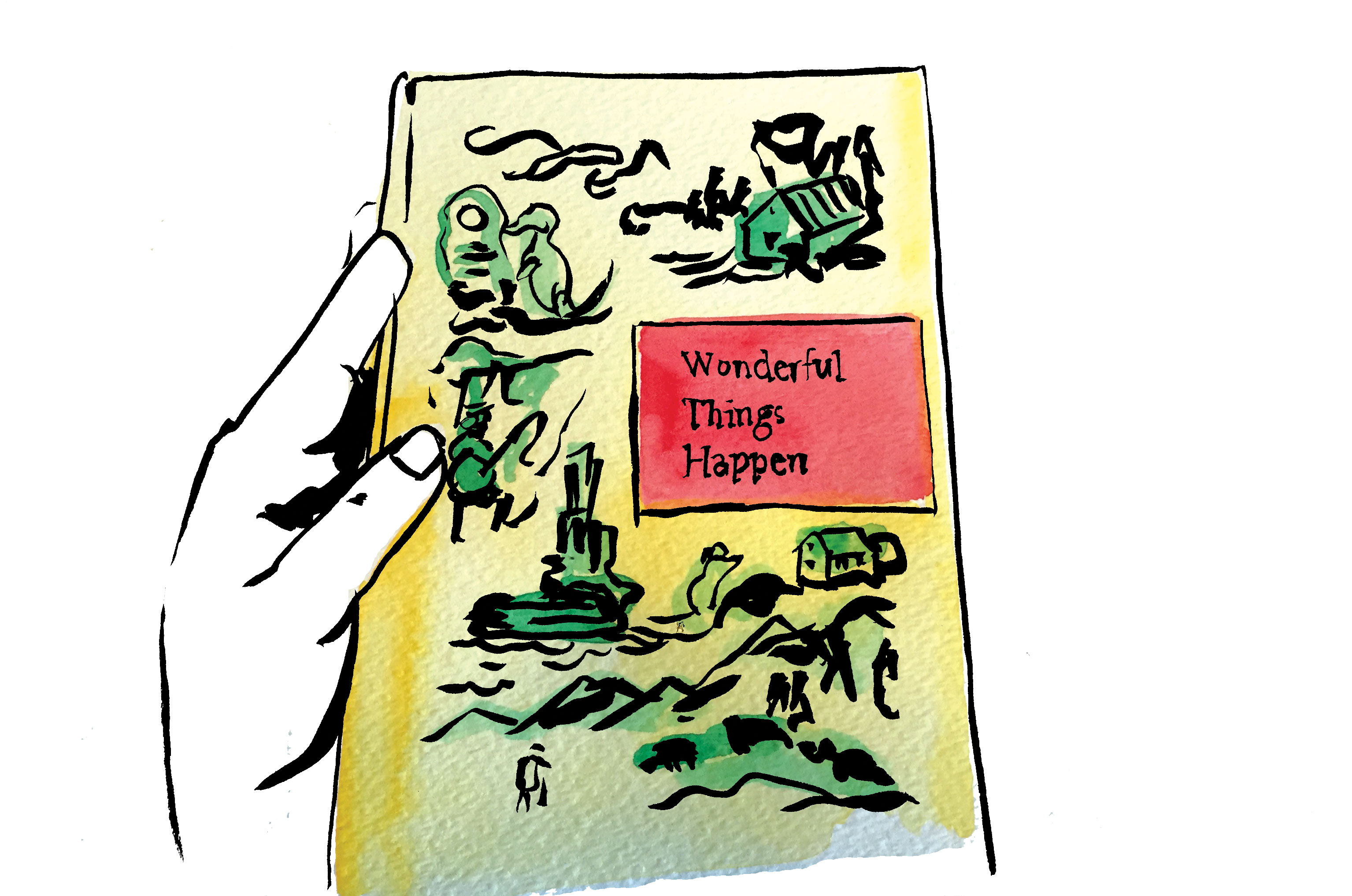 It’s not like anything particularly wonderful happened immediately after that — I mean, Lynn found a gold lamé blouse in the 25-cents bin that she described as “too good to be true,” but otherwise things continued to be marginally lousy for a while. Still, I liked having the book around. When I looked at it, I thought about the time I saw a barn owl with my mom, and the recent birthday I’d celebrated where everyone brought a pie and I got to live out my dream of eating an entire pie made up of eight different pies. I was surprised at how many times I looked at “Wonderful Things Happen” on my shelf when times were especially tough. In January, after I’d started to get the hang of teaching and New Orleans enjoyed a beautifully warm winter, I decided that “Wonderful Things Happen” had been enough of an antidepressant that it deserved some kind of commemoration. And so November 18 (a date I kept hold of thanks to a printed receipt I left under the cover of the book) would forever be known as Wonderful Things Happen Day, and I’d celebrate every year by making a list of 20 wonderful things that had happened. (I should note here that the wonderful things didn’t have to be things that had happened to me. One year, feeling grumpy, I listed “dolphins.”) 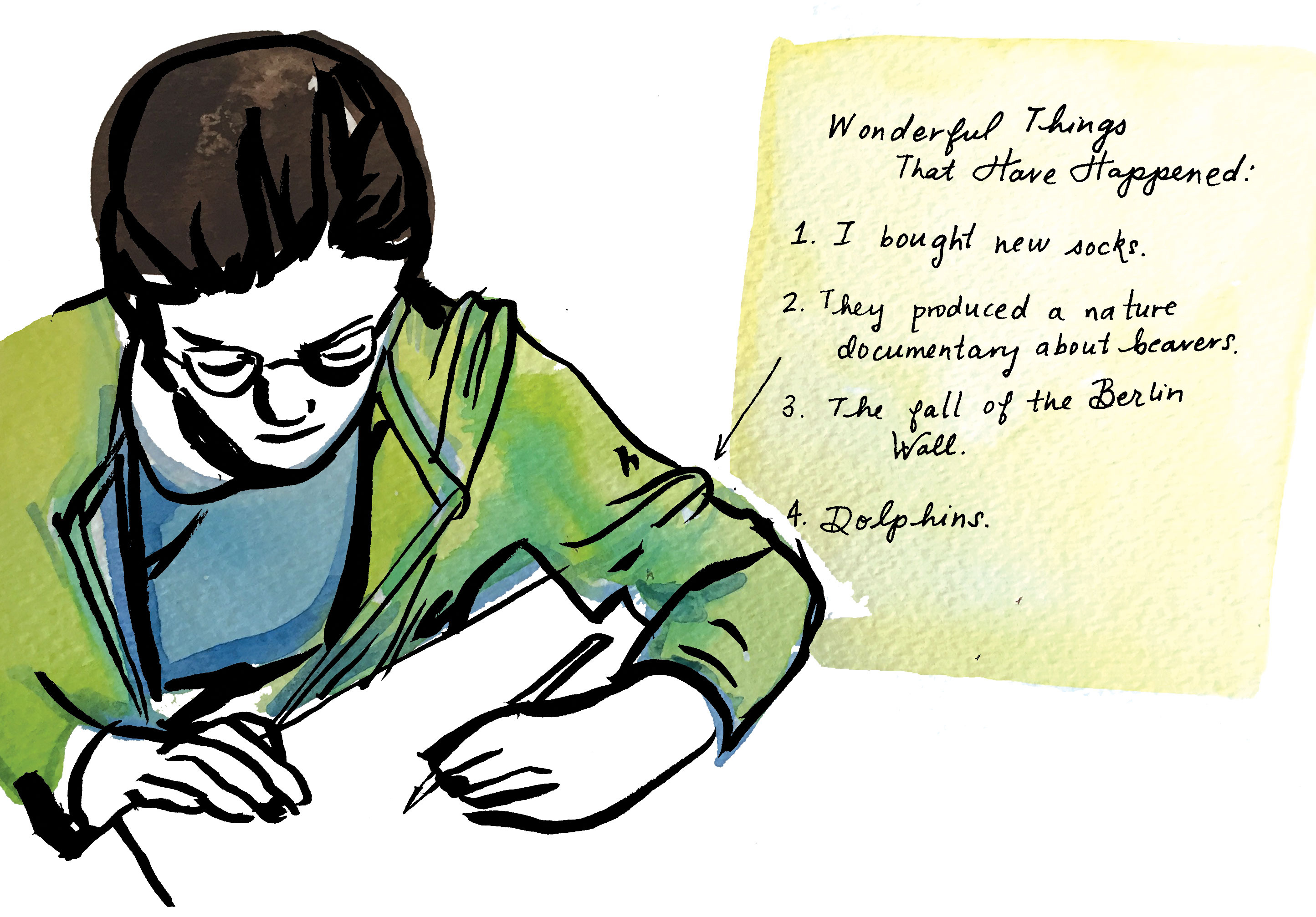 A few months later, I read an incredible children’s book by Byrd Baylor (and illustrated with gorgeous semi-abstract line drawings by her frequent collaborator Peter Parnell) called “I’m in Charge of Celebrations.” The book is about a girl who lives alone in the desert, but who never gets lonely because she chooses her own holidays, and she celebrates all the life that’s around her. “I keep a notebook and I write the date and then I write the celebration,” the narrator says. She celebrates Dust Devil Day, Coyote Day, Green Cloud Day, and the day she saw a triple rainbow. In fact, the narrator tells us, last year she celebrated 108 days in all, “Besides the ones that they close school for.”

“I’m In Charge of Celebrations,” coupled with my newly-dubbed Wonderful Things Happen Day, made me wonder, for the first time in my life, about holidays. 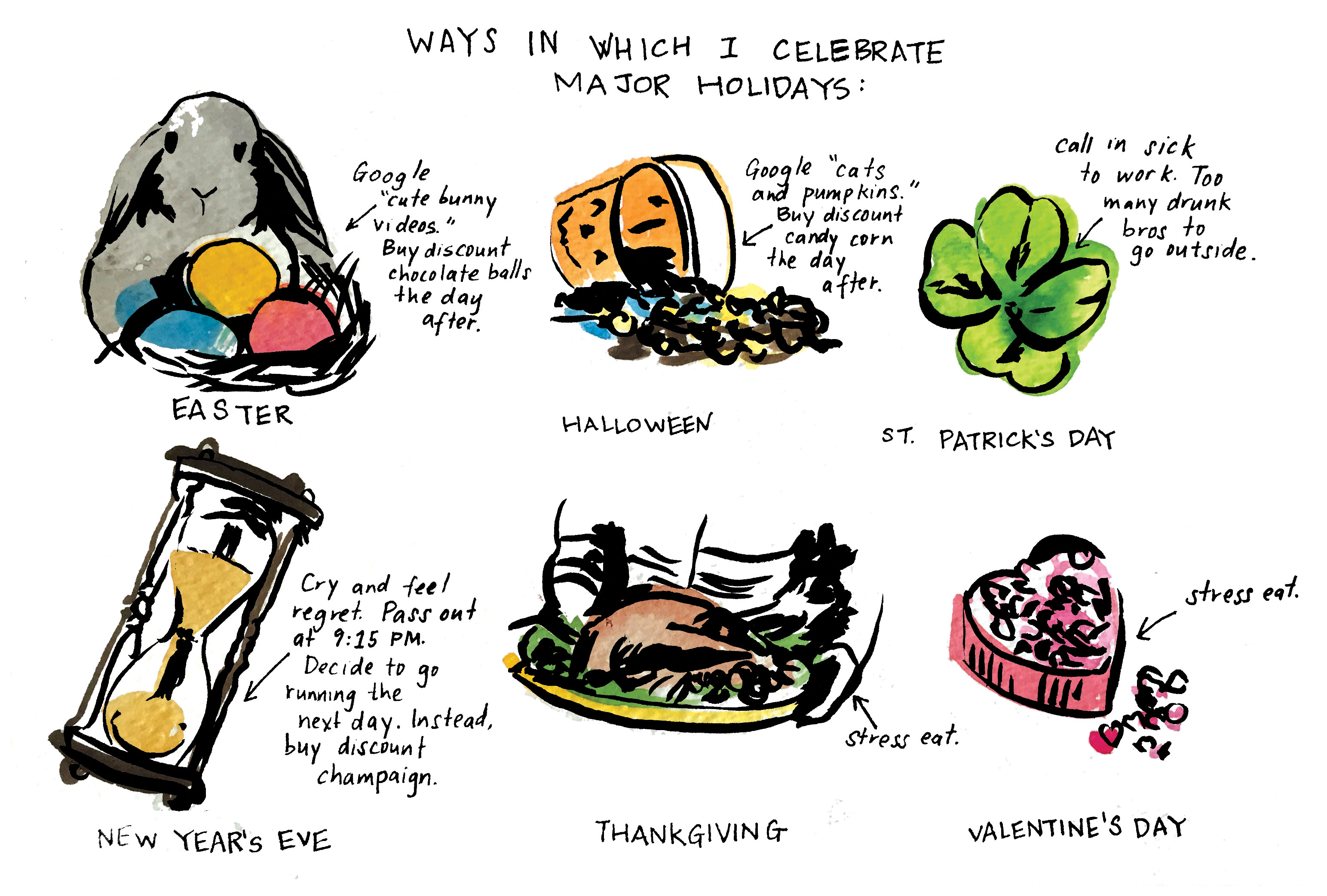 Humans need holidays. We need time to break up the monotony of routine; to allow some distance from our work so that we may return to it with fresh eyes. Worldwide, holidays are mostly structured around religion, and no religion is exempt. That makes sense: The word “holiday,” after all, comes from the Old English word for “holy day.” The Christian tradition gives us Christmas, which has been largely secularized even amidst its many O Holys and Hallelujahs. The Western world shuts down for the month of December, which historically has little to do with “our savior’s birth” (scientists and historians have found that Jesus was probably not born on December 25), and has more to do with the pagan tradition of the “birth of the sun.” Tradition has rooted itself in the month of the December because it is dark, dismal, and requires a little celebration to ensure survival. 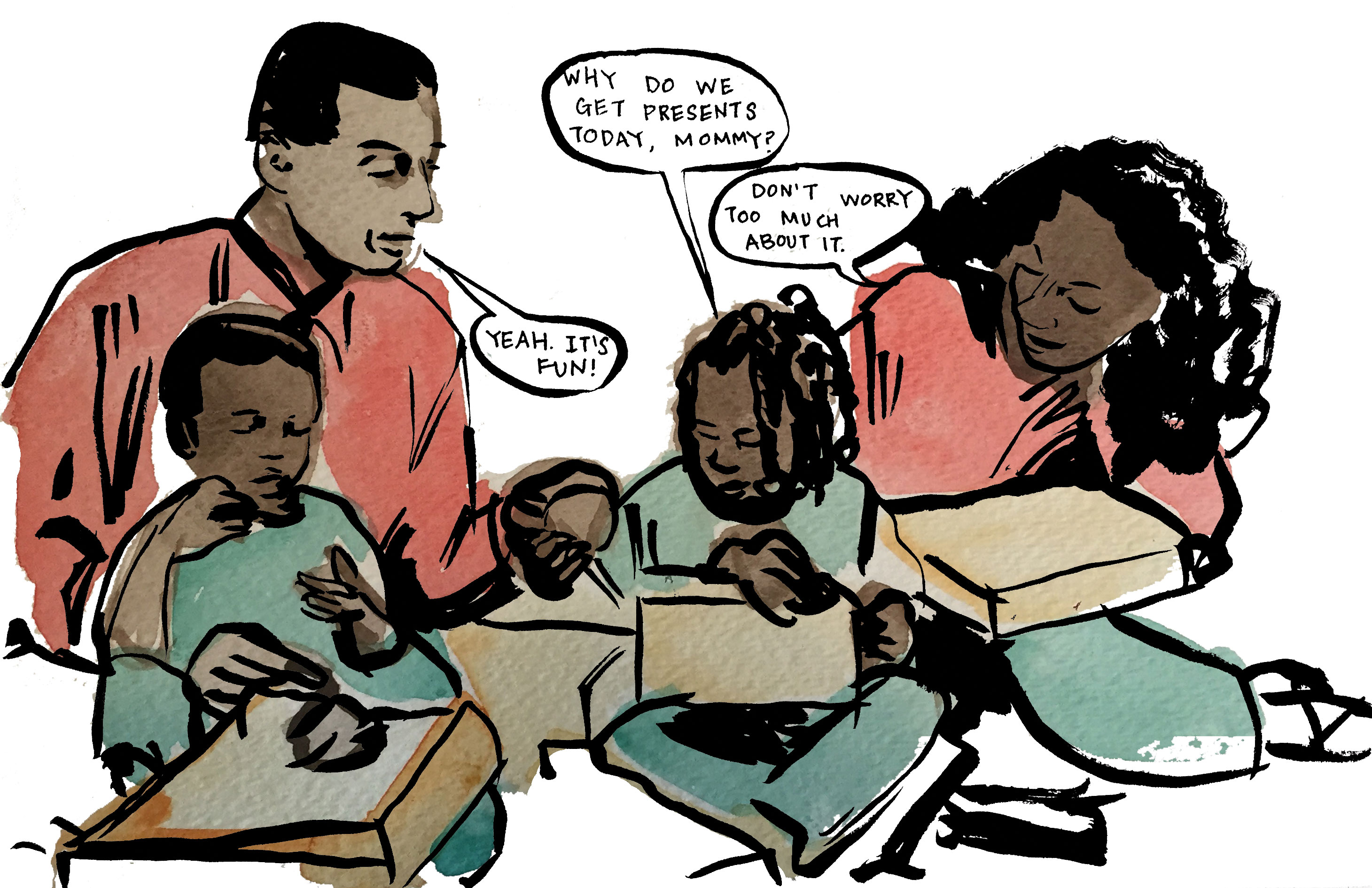 January and February are also dark and dismal, though, and they (at least traditionally) contain less to celebrate. In New Orleans, Mardi Gras is observed city-wide the way the December winter holidays are observed in other cities. (They shut down the schools for the entire week, and the city is inundated with King Cakes and parades beginning on the Twelfth Night, which marks the end of the Christmas season and the beginning of Carnival.) As with any denominational holiday, there are culturally problematic aspects of Mardi Gras, and debates about exclusion and racism are deeply embedded within the history of the holiday. And yet, every year floats are constructed and high school marching bands gear up for another season of celebration. All the major city streets will shut down so people can dance in them. To say that something is beautiful about all of this is beyond cliché: Mardi Gras is among the reasons people who move to New Orleans never want to leave. 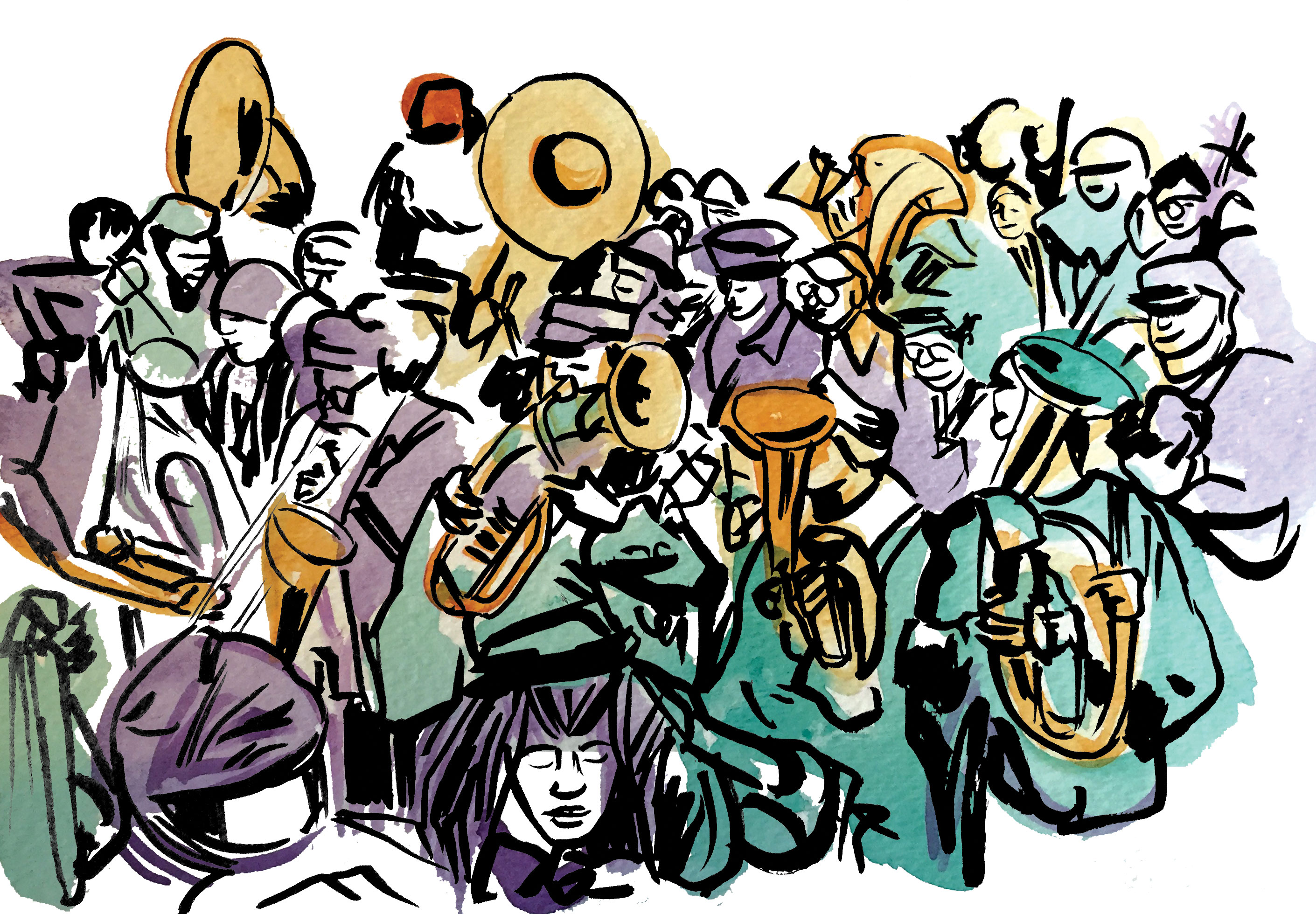 The real lesson of Mardi Gras, I think, is that winter needs as much celebration as it can get. Seasonal Affective Disorder (the type of depression that comes with the most world’s most fitting acronym) affects between 2 and 20 percent of the population — depending on how much regional sunlight is available — and is especially prevalent in the winter. People who suffer from SAD report difficulty waking up, nausea, weight gain, a lack of energy, withdrawal, and a decreased sexual appetite. In Esquire, Miles Raymer (who suffers from SAD) wrote that his “brain fills up with gray clouds and I lose my energy, my focus, and my willingness to do much of anything. I want to stay in bed for days at a time.” I’m not saying parties can save lives or anything, but it sure doesn’t hurt to get out of the house and eat chips with friends when the weather is bleak. 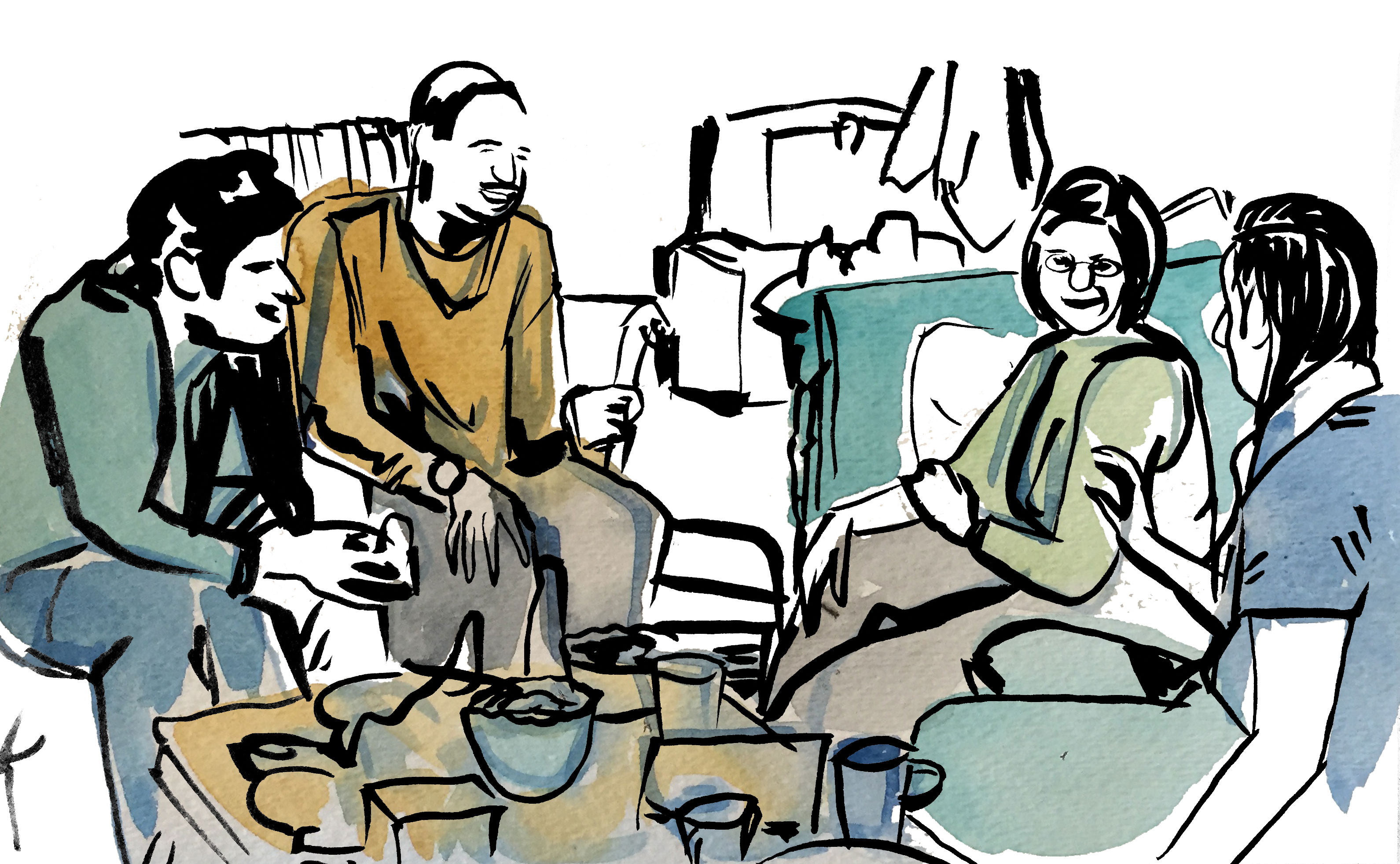 We live in a diversifying world. Children do not always believe what their parents believed; immigration rates are on track to continue to increase over time, which will only allow traditions to shift and break and change. Religions — systems of beliefs — have given human beings reason to assemble and gather since the very origin of culture. That’s helped us survive as a species: There is strength in numbers. Anthropologist Richard Sosis found evidence that social behaviors (such as working together and sharing) evolved through early humans’ shared religious beliefs. As our priorities change, we are increasingly isolated from each other, which is problematic. Social isolation is bad for your health; Slate recently reported that it’s on par with smoking in terms of increased mortality risk, and it’s twice as dangerous as obesity. 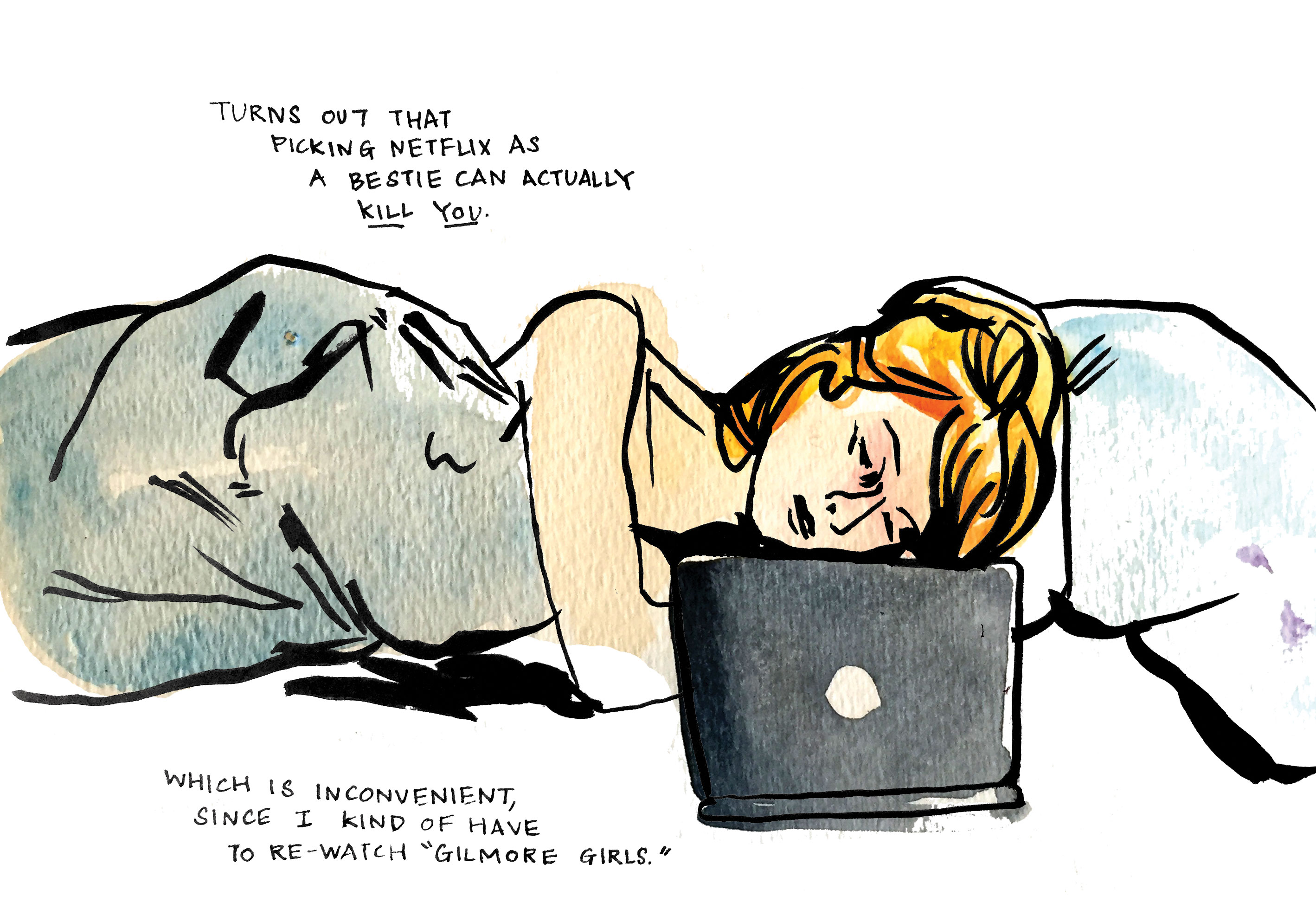 We ought to celebrate with each other, but there is more and more disagreement about what to celebrate. I propose a list of brand new holidays for people to celebrate for the foreseeable future. After all, there are holidays on the American calendar that are long overdue for a makeover. (Thanksgiving, while now co-opted for football and awkward family chit-chat, technically commemorates the beginning of one of the greatest genocides in human history; and let’s not even start on Columbus Day.) But on the other hand, like the book that fell on my foot reiterates, wonderful things do happen.

There’s plenty to celebrate, and there are actually a lot of people out there who have tried to change the calendar to reflect that. In 1986, the American Pie Council (yes, there is such a thing) dubbed January 23 National Pie Day. (They later quietly changed it to March 14 — because of the 3.14 connection.) Christy Hargrove of Asheville, North Carolina started National Squirrel Appreciation Day in 2001 — it’s celebrated on January 21 every year. A radio station in Bloomington, Indiana introduced the world to Bubble Wrap Appreciation Day, which is celebrated on the last Monday of every January. (And may it exist forever more, despite troubled times for the bubble wrap world.) These are all wonderful reasons to gather and revel in the darkest month of the year. 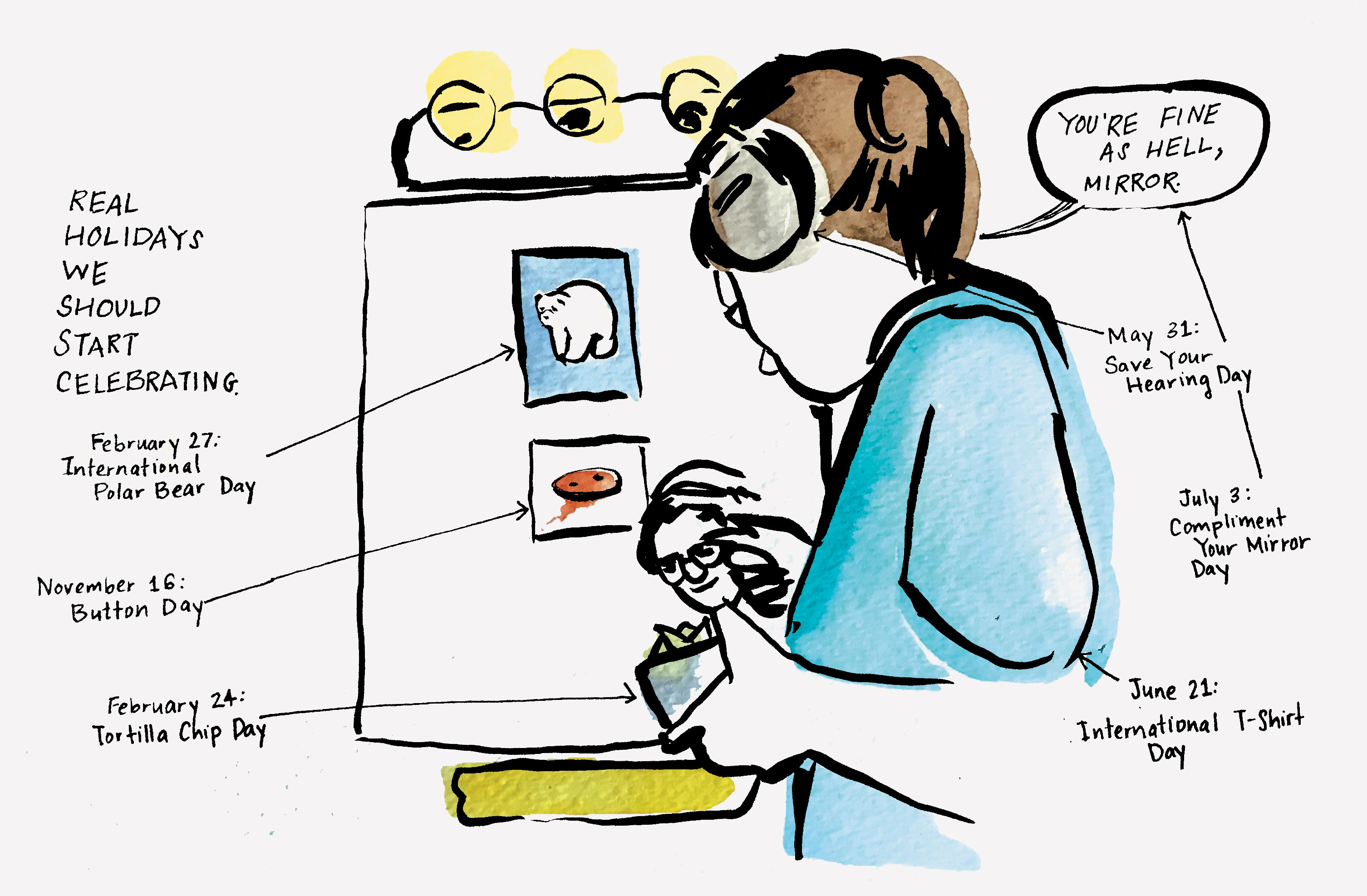 Personally, I’ve made it my mission to reclaim Groundhog Day. Celebrated on February 2 every year (and in a big enough way to have made it into commercial calendars), Groundhog Day is a ridiculous and very old tradition that is, if nothing else, unapologetic about being about a rodent. Groundhog Day is the American interpretation of a bit of European weather folklore, wherein a badger predicts how much longer the cold weather will last. Groundhog Day is the manifestation of a bunch of cold people needing to make up unthinkable stories to deal with their physical discomfort around winter. That makes a lot of sense to me, and I celebrate Groundhog Day every year in a big way. (There are hats involved.) 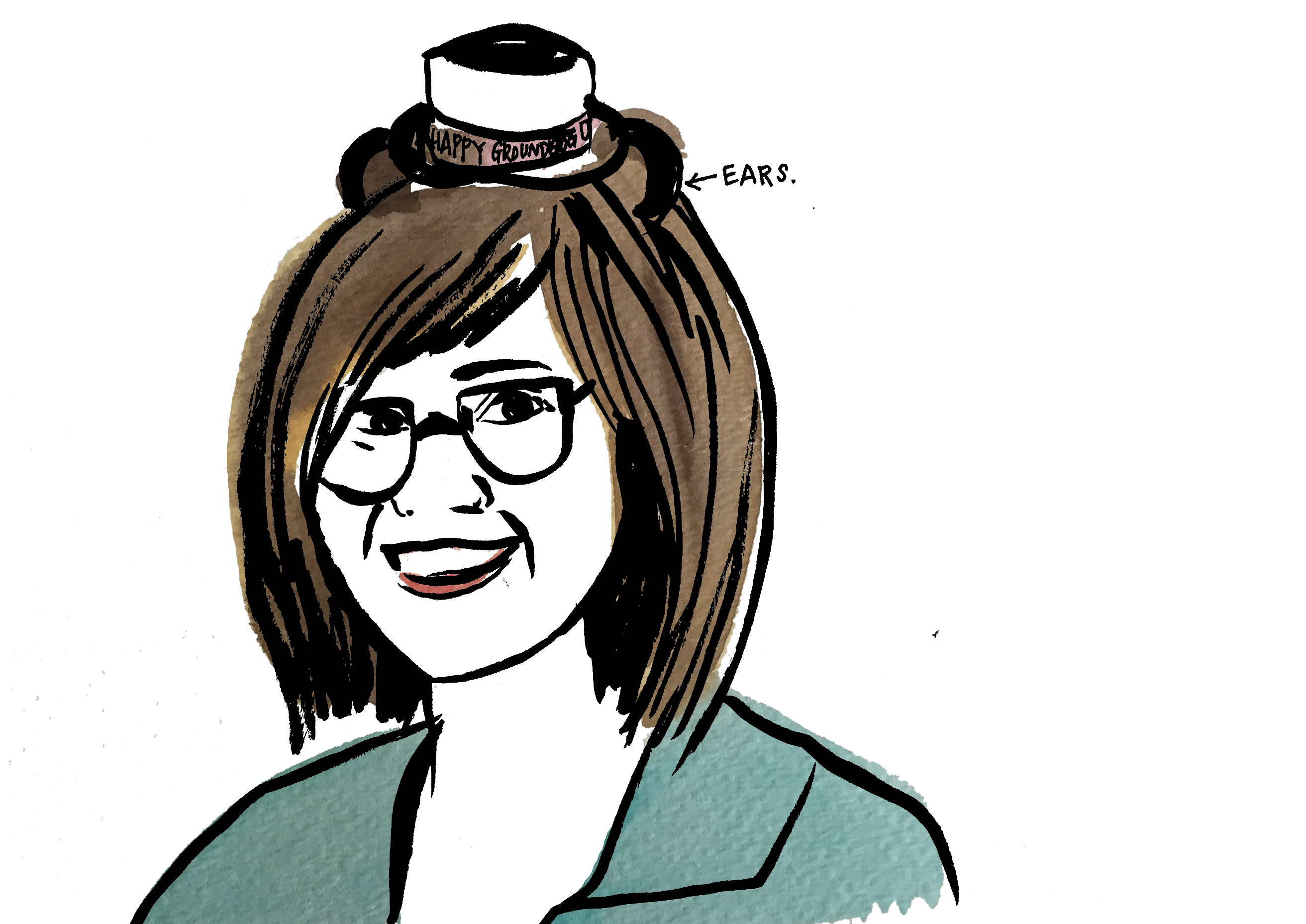 Being human isn’t easy; we don’t have that matted fur that the other mammals get to hide behind this time of year, and we don’t have that changeable blood temperature that snakes and birds enjoy as the seasons change. Really, we only have each other. That, at least, is something to celebrate. 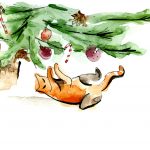 Gift Ideas for Your Cat (on an Art Student’s... 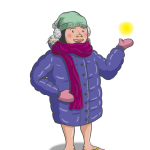 Florida Woman Tells Students How to Dress for Chicago...

One Response to Wonderful Things Happen: Keep The Holidays Coming