For the fifth year in a row, alternative comics fans nationwide flocked to the Windy City for the Chicago Alternative Comics Exposition (CAKE), which was held this year at the Center on Halsted on June 11 and 12. The festival, which has expanded to accommodate a massively growing movement of DIY comics-makers, boasted a packed room of artist tables, a weekend-long schedule of free workshops, panel discussions, awards, and more.

The gym room on the third floor of the Center on Halsted where the bulk of the action took place was overflowing all weekend long. This year, 577 people applied for (always free) table space at the festival, but the space could accommodate less than 100 — an indication of the overwhelming interest in the nationally broadening independent comics community.

There were some big names at the expo this year. Fans and fellow artists lined up to get books signed by comics legend Chester Brown, who wrote the critically acclaimed “Paying for It,” “I Never Liked You,” “The Little Man,” and others. Other special guests this year included sci-fi artist Tyrell Cannon (an SAIC alumnus who works in the media center), “The Changers” writer Ezra Clay Daniels, Kramers Ergot Editor Sammy Harkham, cartoonist Cathy G. Johnson, and multidisciplinary artist Patrick Kyle. Local comics celebrities Laura Park and Leslie Stein also appeared as special guests at the festival.

Students and alumni from the School of the Art Institute of Chicago (SAIC) were particularly well-represented in the exhibitor’s room.

Molly Colleen O’Connell, who is pursuing her MFA in painting and drawing, set up a table where she sold posters, stickers, and homemade books.

“I have a book of old comedy that may or may not be funny,” O’Connell said. She picked up a hand-pressed offset-printed book featured at her table. “I do standup; this is just some old monologues that were sitting around and I didn’t know what to do with, and so I put drawings on them thinking that maybe that would make comics people want to read them,” she said. In her artist’s bio she described herself as, among other things, a “modern clown.”

This was O’Connell’s first year returning to CAKE since its inaugural weekend, and she said she was pleased with the way things have changed since then.

“The first one was at Columbia and it was kind of stuffy and weird. This building is quite nice,” O’Connell said.

She added that she’d met a lot of nice people hanging out by her table. “I met someone who had a dog in a bag. So, yeah, the dog in the bag was my most exciting customer,” she said.

Printmedia MFA candidate Conor Stechschulte set up his table at CAKE for the fifth consecutive year — he’s been tabling at the festival consistently since its inception.

“I just finished this book ‘Christmas in Prison,’ so I’m excited about that one,” Stechschulte said, showing off a thick, multifaceted perfect-bound book. “I’ve been working on it all semester. It’s screen-printed, risographed, and offset; and hand-bound.”

Stechschulte said things had been going pretty smoothly for him this year. He had several comics and experimental print books to sell — as well as a number of unique-looking cassette tapes.

“This is my old band from Baltimore called Witch Hat,” Stechschulte said about one of the tapes, adding that it was mostly noise rock and punk music, and that he hadn’t sold any copies yet. “But I did sell a bunch of this weird ambient tape that I made like eight years ago,” he said.

Stechschulte thinks that CAKE has really started to take off in the last couple of years. “It has really become a show where you can go and see great people and great work,” he said. “I just hope that events like this can continue to sustain themselves, and that there continues to be a growing interest in this stuff.”

Amy Petz, who works for the Art Institute in the publishing department and occasionally takes classes at SAIC, was also impressed with this year’s turnout.

“Attendance is great, the rain is holding off, and there’s lots of people to talk about comics with. So I’m sort of smiling constantly because I’m thinking I’m surrounded by comics-lovers,” she said.

Petz was tasked with co-organizing the weekend’s workshop events. She was excited about the lineup she had helped put together for Sunday, which included a highly anticipated watercolor workshop with Stein — a local comics legend.

“I think I’m most of proud of the newest one,” she said. “I’m really pleased with how the printing turned out and I think the artwork is a new step for me.”

“At first I thought my work was too simple, but Chris was very encouraging of just embracing the way you work and helping me find the strengths,” Petz said.

SAIC Alumnus Danielle Chenette also set up a table for the fifth year in a row, having participated in every iteration of CAKE. Chenette recently moved to Los Angeles from Chicago, and her table featured a comic called “Pace” about the transition into living in a city where car culture is prevalent, and the complicated nature of watching time pass you by in life.

Since she graduated with her BFA in 2012, Chenette has really started to embrace the life of an artist.

“It definitely took a while of juggling part-time jobs and keeping up the endurance of making your own work,” she said. “Then after a period of time, a lot of my friends who were living in Chicago started making things like [the comics reading series] Brain Frame, so there were lots of performances and new types of comics, and then after a while I was living the art life. But it’s still a learning process.” 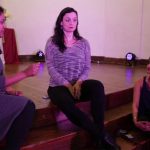 Rendezvous with the Makers of “Bindis and Bruises” 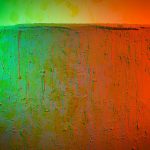