In October, F Newsmagazine initiated a challenge to the student body to design Donald Trump’s border wall. We hoped that this would be a prompt to invite students to mock Donald Trump’s ridiculous rhetoric specifically about building a huge wall with a “big, beautiful door.” It was odd that Trump evoked the idea of beauty in relation to such an ugly concept, and F wanted some sort of commentary on that. Our intention was to generate a laugh at Donald Trump’s expense — a man we unanimously believe to be deeply repulsive and unabashedly racist. We messed up.

In inviting students to participate in this challenge, F invited students to make light of a reality tied to real, lived trauma and a force that fractures families — trauma with wounds connected to the personal histories of our own families, the families of our loved ones, and our friends. To make light of the idea of the border wall was to make light of the fact that many families have already been affected by the extreme measures already put in place (a fence, detention centers, etc.), the desire to have a wall, and the often invisible walls that already exist in our country. We are deeply saddened by this. Our intention was to poke fun, but intention is irrelevant when there is injury. This is how racism works. It does not need to be animated by people with bad feelings about another group of people. It consists of complex systems and cultural understandings that function automatically and if unquestioned can be perpetuated by the very people who wish to fight it.

As a publication run by students, and for students, we value the opinions of fellow students not only because you are our readership, but because you are our peers. We do not shy from controversy and will defend what we publish when we consider ourselves right, but this is not the case. The response from our fellow students served to remind us that we violated our own ethics, and this feedback is invaluable. The truth is that we talk about Trump a great deal and make jokes at his expense frequently. At some level, that joking is because we are afraid. Where we hoped we would see the eradication of racial boundaries, we are seeing the rise of racist rhetoric and predatory policy. We are afraid of this reality, and so must speak against it. On the website you will find articles and cartoons that point to how seriously we take racism, as well as the sometimes silly anti-racist work of our staff and contributors. In our fear, we wanted to confront Trump by making him small. Small enough to be ridiculed, small enough to be seen as absurd. What we did not consider fully was what we had diminished in the process. F believes the winner of our challenge took the prompt in the spirit in which it was intended and better skewered Trump than we were able to (and without downplaying his vitriol). The work puts his venom front and center. F invites future contributors to devote their energies toward that which brings us together instead of that which divides us.

We offer our deepest apologies. We understand F Newsmagazine as a teaching magazine where the student body learns to cover news, learns to write art reviews, and learns what satire is. This is a learning opportunity for us all and we will do better. F will continue to satirize those who are smug, racist, and self-important, but with a clearer understanding of the power of the publication and the realities of our student body. This apology is not the end point of this conversation. F prioritizes action. In addition to our apologies, we offer this platform: write to us, write for us, post your comments. F Newsmagazine is a publication run by students, for students, and we want to give students the opportunity to have their voices heard.

We hope you consider F Newsmagazine a vehicle for that voice.

Like Letters, Uncategorized A Letter From the Editors
« Previous Story 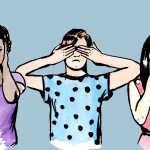