Initially, Jeff Koons was J.K. Rowling and Willy Wonka combined. Students’ e-mail inboxes were flooded starting at the beginning of the year with a simple message: Koons was coming to visit. On the morning of Wednesday, September 9, students piled up in a zigzagged line in front of the ARTICard office, through the hall, and down to the staircase in front of the SUGS gallery. Some came haphazardly in pajamas while others held cups of coffee, knowing that they would have to go from this line to their 9 a.m. classes. SAIC students were the anxious readers in front of the bookstore and the children looking to buy chocolate bars that held the “golden ticket”  (which, in this case, was a pink ticket to the Rubloff Auditorium, although it would have been incredible if the ticket led to admittance to Koons’ “factory.”) The ticket distribution was supposed to start at 8:30 a.m., but instead began around 8:15 a.m. in order to get through the overwhelming crowd. By 8:50 a.m., there were no tickets left.

On the evening of September 21, the Rubloff Auditorium was packed with 900 people, including roughly 700 SAIC students, public attendees, administrators, staff, faculty, and the local philanthropists Stefan Edlis and Gael Neeson, who recently donated 42 pieces of their contemporary art collection — including Jeff Koons’ work — to the Art Institute of Chicago. After a short video celebrating SAIC’s 150 years anniversary, President Walter E. Massey’s greeting, a  brief word of appreciation to Edlis and Neeson, and Lisa Wainwright’s introduction of the artist, Jeff Koons appeared on stage.

His colorful and flamboyant sculptures counter-intuitively represent who the artist is today: Koons is a gentle storyteller. He softly started the evening by sharing how he became an artist as a young child. Aesthetically influenced by his interior decorator father growing up, Koons found interest in art early-on. However, his perception about art changed radically during his first art history class in college. Art suddenly transformed from a source of anxiety to what would become an essential sense of self. He decided, “I’m in. This is what I want in… Slowly, you start to realize there are fewer and fewer people around you. If you really want to participate [in the art] you can, because people dwindle away eventually.”

Going through slides of his own works, he continued the story of his journey as an artist. He didn’t forget to nonchalantly mention amusing details about his life, including how he initially met with Ed Pashke at the Ink Well Bar and his affinity for Led Zeppelin’s music. Koons, with his calm voice, sang, “Ooh, yeah-yeah, ooh, yeah-yeah, when I’m down.” He went on to explain the song’s brilliance in capturing both tragedy and comedy in a single line of lyrics.

In talking about his well-known “Rabbit” sculpture Koons said, “That could have almost been a pig.” The audience laughed at his enthusiasm — Koons is daring and sweetly ironic on stage. If anyone had handed him over a thick wool cardigan when he was explaining his “Jim Beam J. B. Turner Train,” he could have been Mr. Rogers for the night — the “Jim Beam trolley” running at the back of a tender-voiced storyteller. It was a beautiful night in Mr. Koons’ neighborhood.

Mr. Koons made sure to advise his neighbors on his ideas of sex, masculinity, and femininity. These very ideas are intentionally imbedded in almost all his works.

The night concluded with a dialogue between Koons and the students through a follow-up question-and-answer session. The conversation began with a simple-yet-bold question: “What is art?” Koons responded, “For me, [art] is an experience that differs for everyone. It’s when you feel that art triggers one’s potentials, physically and intellectually.”

The conversation continued with questions and answers related to sexism, the controversy of the fabrication techniques of his works, understanding of the “perfection of history,” and more. Perhaps the highlight of the night was when a student asked Koons, “What’s the most sexually gratifying experience you had in your life?” After the audience’s laughter quieted, Koons replied, “I have eight children. Each and every one was an equal high point.”

Seeing Koons in the flesh, hearing his stories, digging into serious and funny dialogue aside, our J. K. Rowling, Willy Wonka, and Mister Rogers left with some memorable words in his return to his alma mater. Whether we appreciate or despise this alumnus of ours, his postmodern assertion “when you learn to accept yourself, you want to go out,” rings true to aspiring artists and scholars.

On behalf of F Newsmagazine, I was able to submit a question to be asked to Jeff Koons during his interview with SAIC’s Office of Communications. This article will end there.

Could you give any advice to current SAIC students?

I would try to use my time as wisely as possible. I am 60 years old and… I try to grow as a human being; I try to grow every day. I try to have my art become a vehicle to help others experience growth, enlightenment, and a sense of transcendence. Other artists gave that to me in my life, and I’d like to be able to share that experience.

Arts & Culture What Jeff Koons Left With Us
« Previous Story 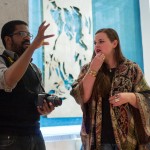