Why Republican love for Netanyahu shows the shallowness of their patriotism.

To be elected president in America, you must convince the American people of the strength of several things: your character, your intelligence, your capability, and above all, your patriotism. You have to prove your love for America and Americans beyond a reasonable doubt. Simply watching the first five minutes of the second Republican debate makes this apparent. Chris Christie asks the cameraman to focus on the faces of the audience, “because this is about them.” Rand Paul declares his devotion to the original American patriots, the so-called Founding Fathers. Donald Trump, in almost-complete sentences, promises to “make America great again.”

This strategy of “proving your patriotism” isn’t anything new on the political stage. This year’s crop of Republicans, however, are trying to do more — or less, depending on your perspective — with this notion. They are trying to convince the American people that they love America without loving American ideals.

Among the far-right groups within the Republican Party, the most recognizable is of course the Tea Party. Their name is taken from an event in revolutionary America in which patriots poured tea into the Boston harbor to protest unfair taxes imposed by the British. Very closely connected to this event is the Boston Massacre, an event in which protestors threw stones and snowballs at British soldiers, causing the British soldiers to open fire on civilians in turn. This is one of the most iconic moments in American history, and its subsequent trial is held up as a great example of American justice.

This sort of patriotic nostalgia is the very bedrock of the Republican Party’s political identity in 2015, and this fact allows a terrible irony. These men and women vehemently support Israeli Prime Minister Benjamin Netanyahu, who recently declared war on “stone-throwers.” A key difference that must be noted between the Boston Massacre and Netanyahu’s “war on stone-throwers,” however, is that Netanyahu’s case many of the stone-throwers are children.

On September 16, Netanyahu tweeted, “We are declaring war on stone throwers.” On October 5, a 13-year-old Palestinian schoolboy was shot dead by Israeli forces. Abdulrahman Shadi Obeidallah, known to his friends as Abdo, was the fourth child killed by Israeli soldiers in the West Bank this year. This is not an aberration in Israeli military policy, it is the Israeli military policy.

Abdo, who was not taking part in protests, was shot as he walked past the demonstration on his way home from school. Netanyahu’s policy of allowing his troops to shoot anyone, including children, so long as they are close to a person throwing stones, is essentially a policy which guarantees massacres as a matter of routine.

Republican support for Netanyahu cannot be overstated. On March 3, 2015, Netanyahu addressed a special joint session of the United States Congress to voice his opposition to any deal with Iran, and by extension, President Obama’s foreign policy. He was not invited by Obama, he was not invited by a bipartisan coalition, he was invited exclusively by an alliance of Republican congressman. The invitation was extended without the consent of President Obama, and then House Speaker John Boehner openly admitted to concealing the invitation from Obama, saying “There’s no secret here in Washington about the animosity that this White House has for Prime Minister Netanyahu, and frankly I didn’t want them getting in the way.”

A recent Bloomberg poll found that 67 percent of Republicans were more sympathetic to Netanyahu than Obama. The majority of Republicans support Netanyahu — a man whose routine murder of stone-throwers far outsizes the Boston Massacre — more than they support their own president.

Patriotism is a finicky thing. It manifests differently according to each nation, but in general, it is a devotion to a nation and a culture. In America, Republicans are attempting to draw voters by exploiting patriotic symbols, while supporting a man who undermines the very values America is supposed to defend. They have created a caricature of patriotism, one which allows them to simultaneously salute the American flag and a man who murders children. 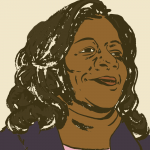