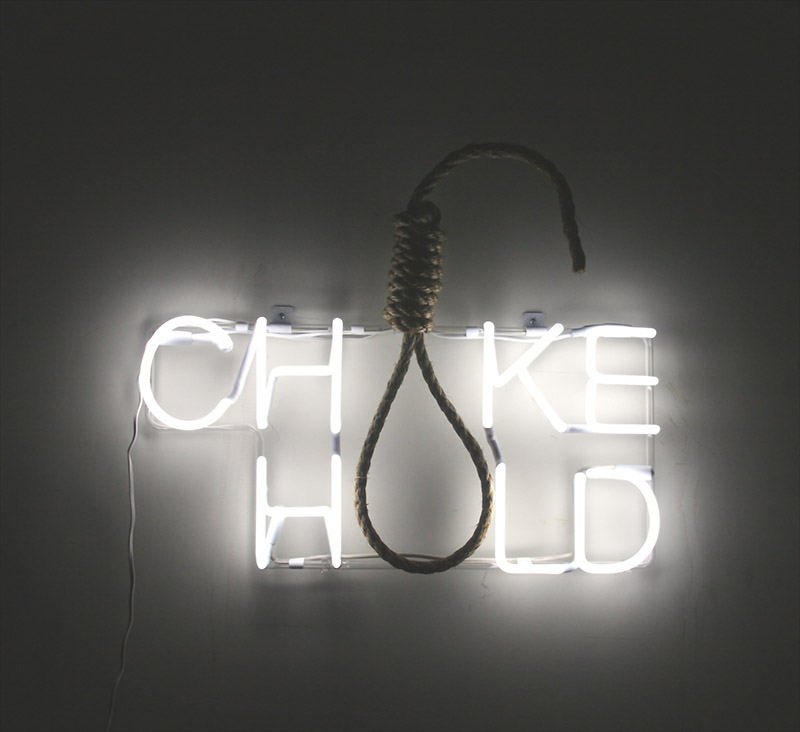 Guns, bullets, gold chains, basketball sneakers, watermelons, and buckets of fried chicken all neatly arranged, painted white, and sitting atop a small, white podium. That’s one of the images that stays most vividly in my mind after seeing artist Ti-Rock Moore’s Confronting Truths: Wake up! show at Gallery Guichard. And there was quite a bit to see. American flags painted black and hung upside down. Nooses. So many nooses. Black men behind jail bars made of dollar bills. The less-than-subtle work of stacked and illuminated boxes of Saltine crackers. A dozen Ku Klux Klan robes. The Statue of Liberty in black face. The Confederate flag torn in strips and placed on top of the American flag, with each torn strip bearing the name of a victim from the Charleston shooting. American flags with white bullets instead of stars. Bright neon signs that read “white privilege.” Virtually every inch of the gallery was covered with the artist’s indictment of anti-black racism. 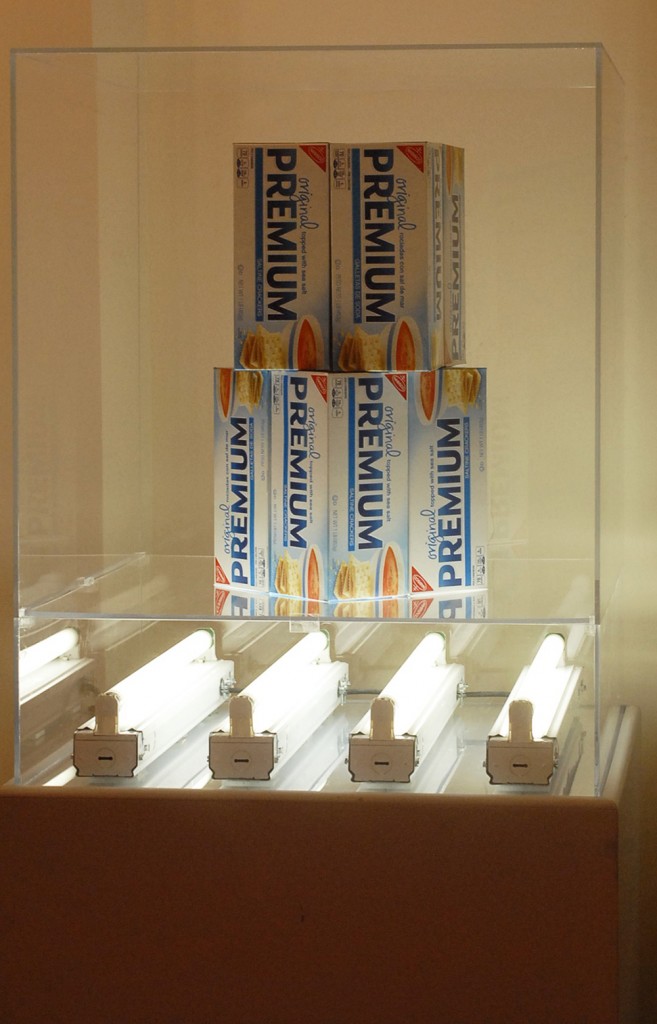 I went into the gallery fully prepared to be shocked and horrified. As much as I attempted to prepare an objective eye, I was already influenced by the articles, most of them carrying the headline “controversial” and framing the exhibition as a white artist potentially going too far. Armed with this knowledge and the twenty minutes of deep breath meditation I did on the train, I encountered work that was shocking for reasons I hadn’t expected. The work bored me. I was surprised at my own lack of reaction. Where was my outrage? I read Ta-Nehisi Coates, watch the Melissa Harris-Perry Show every weekend, and I just checked out The Bluest Eye from the library. I’m supposed to be a card-carrying blackademic, dammit. 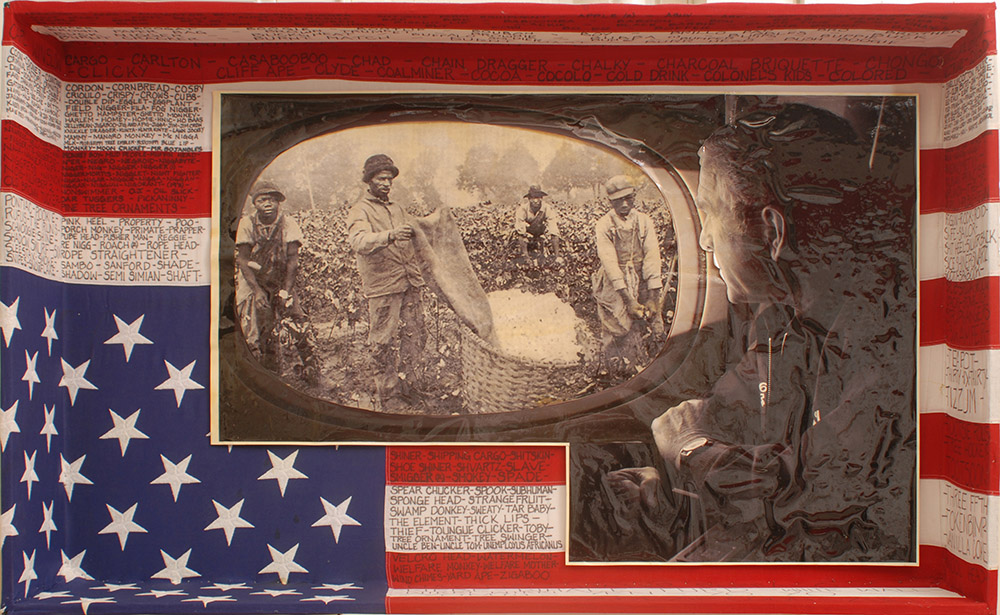 Firstly, I had the impression that the artist is truly and earnestly opposed to racism, and I did not doubt her sincerity in wanting to end anti-black racism. You can’t deny that she truly went for it. I even feel somewhat protective of the gallery owners, Andre and Frances Guichard. It is so deeply important there be art galleries run by black people and that center black life. And whether or not one deems the show “good” or “bad,” it is critical that these spaces and conversations exist because they serve as the cultural landmarks that shape our politics and ultimately create space for black life. However, what I found tiresome about the show is that it is a monument to racism and not black life. Nothing was subversive because everything was just racism replicated. Moore’s presentation of the black experience was one of helplessness and hopelessness in which blackness is defined exclusively by the brutality of our deaths instead of the strength, resistance, and even joy in our lives. Interestingly, the gallery owners said to me that the overwhelming majority of the people who come to visit the show enjoy it. Some are even using the space as an educational resource to explain the realities of racism to young people. At some level, it seems to be functioning as a museum of racist relics. Even still, a few questions haunted me. For all of the pieces that had “SOLD” written on the tags, who was buying this work? Did they understand that it was intended to be anti-racist work? Is Ti-Rock Moore actually profiting from racism? 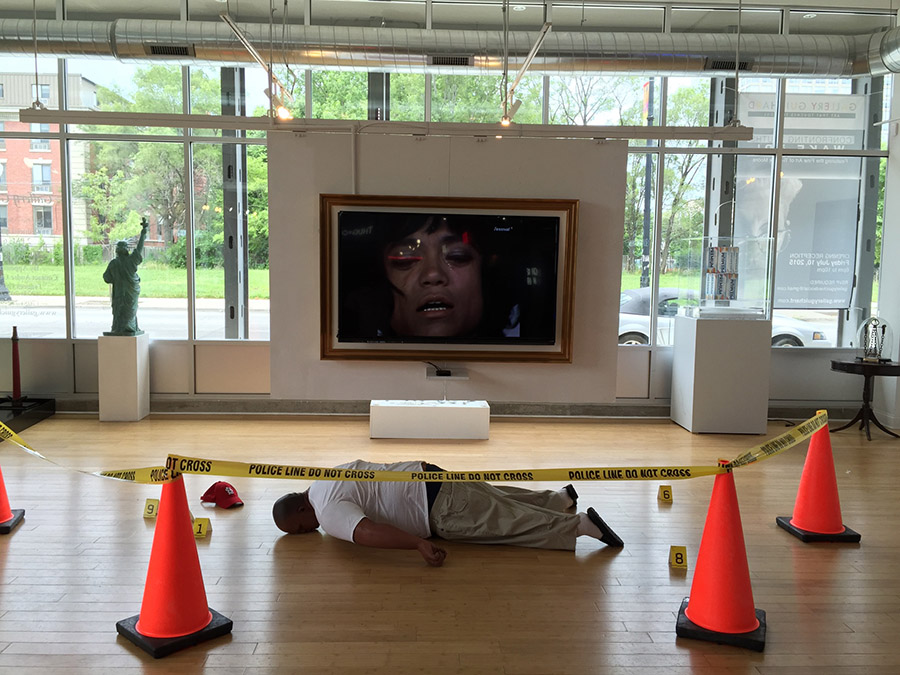 For me, the most egregious offense in the show was the life size replica of Michael Brown’s slain body. It rests near the door on the gallery floor behind caution tape and positioned as his body was after he was killed by Officer Darren Wilson. It’s this work that symbolizes how much Moore misses the point. To the officer who shot Michael Brown, Brown was a black thug interchangeable with other black thugs. He was not an individual. He was one of “them”. Brown’s slain body was not a body. It was a “thing”. A thing to be investigated, a piece of evidence, and a thing to be left out in the middle of the street perhaps to send a message to the community. I believe Moore, not unlike some others in the #blacklivesmatter movement, sees Brown’s death as being in service of the movement. His death is similar to the countless others who have lost their lives due to the violence of racism, so his death will serve the greater purpose of advancing the anti-racism cause. But Michael Brown was a particular human and an individual. He should be grieved and honored particularly. He was not part of a “them.” And his body or its likeness is not a thing. It is certainly not a thing to be left in the middle of the gallery floor to send a message to the community. 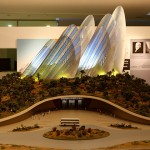 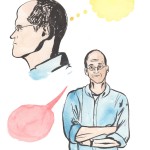