What’s in the Cards

SAIC Gets a Tarot Reading 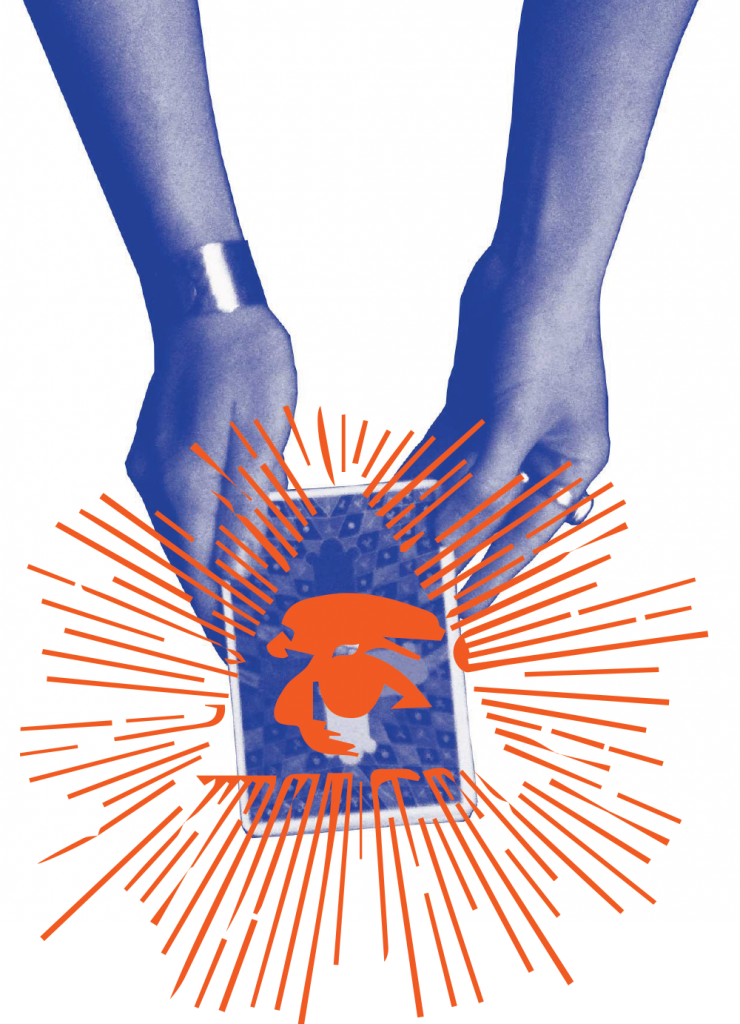 Sticking to a theme of “prophecy,” F Newsmagazine designer Meghan Ryan Morris sought out the prognostication talents of Daun Fields, a professional tarot reader and guest lecturer on tarot at Indiana University, to learn what’s in store for the 2014-2015 school year at SAIC as well as offer some insight into the school community. Daun drew six cards: one describing the general characteristics of SAIC students this year, one for each season of the upcoming year, and one for life for students graduating in the spring.

Meghan Ryan Morris: (shuffling the tarot deck) I’d like for this reading to be about the school year, as general or as specific as that could be, and also think of the student body.

(Meghan hands the deck to Daun, who shuffles and then stops.)

Daun Fields: OK, let’s pull a card for the student body and see what unifies everyone.

(Daun pulls a card and laughs.) 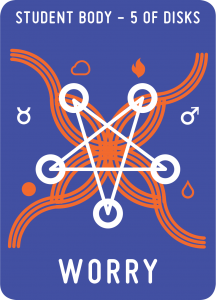 DF: Since we’re talking about things that unify all of you students for this year, the Five of Disks is pretty awesome. It’s called “worry,” and you can connect with that, as art students! There’s a certain amount of fear and worry that keeps you all going. On the card, there are these metal cogs, and they’re all rotating on different symbols— earth, air, fire and water — all the different elements. In the middle is the pentacle, all of the elements unified and working together. But this card came up as inverted, meaning that as art students, there is always a pervasive fear for you. This is true especially for really progressive, and even subversive art students; this fear of just being a part of the machine, not having your own voice or technique or style.

I would say that the student body, this year in particular, is very much about trying to break out of this [machine]. There’s a lot of energy being expended and also a lot of fear tied up in that, so this is different from other years. There’s a bit more of a collective, unconscious push. There will be a few students who really excel, and their success instills fear in the others, who think, “I’ve gotta have my own thing, too!” That is, having a feeling that your world has been turned upside down, but using art to filter that emotion. One of the challenges that comes with that is utilizing these fears and worries to make really great art. Do you connect with that at all?

MM: Definitely. That’s such a funny card to pull.

DF: Let’s move on to the seasons of this year, and what that has in store for the students. (Pulls cards for fall, winter, spring and summer.) 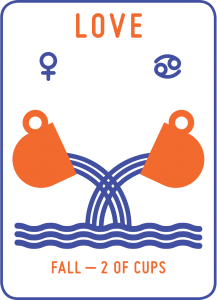 DF: Fall is about getting into it because you love it. You’re all coming into this new journey of a new year together, coming with much love, few expectations, a sense of trust and openness. You trust that your teachers and peers are going to be able to guide you, and you start with having an open, loving heart to start, because, well, it’s going to get heavy this year. The first thing you can do is to remember why you’re at SAIC in the first place, and just nurture yourself. Art isn’t always a moneymaker, and not everyone is in it for financial gain. So immediately, in the very beginning, it’s going to be meaningful for everyone at school to connect over why they are there to begin with.

With fall, it’s about [the star and astrological signs] Venus and Cancer. Venus is about love, sex, compassion and earthly pleasures; Cancer is about nurturing, home life, structure and nesting. So together, the season is about settling in, but it’s also about the “two” of a partnership. In terms of artists, that partnership is between you and yourself, the internal and external, which brings you to a third element of self-reflection and self-love. That’s important, especially at the beginning of a new year, because it’s the beginning of a new, complicated challenge.

MM: This is also a funny card to draw, because in our editorial meeting to talk about what we wanted to ask in this reading, the only real concrete questions that people suggested were about money and sex.

DF: This card is about money, too, and also health, creating things with your hands, and the body. This is also the only cups card — the only water-related card — to come up in the spread, so the key is to channel that initial love and allow that to flow throughout the year. All of the rest of the seasonal cards we pulled are swords, which are about the mind, visualization, dreams, the subconscious and logic. A lot of these airy subjects and symbols are coming up in winter, spring and summer. 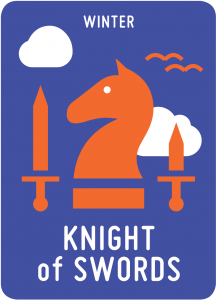 DF: The Knight of Swords is holding a big sword in his right hand and a little dagger in his left, riding a big, streamlined, and focused horse. He himself even has wings. This is the picture of someone idealistic, with a very strong mind, who can both visualize and seek their goals. Some people have very good ideas but they can never move forward with them; that’s the challenge. The big sword represents the part of your mind in the alpha state, in the zone and connected, producing and creating. But that little dagger represents the lower mind that overthinks things and self-censors. Every time the Knight swings his big sword and makes something amazing, he doubts it, and cuts down his confidence with the dagger.

This card is about focusing on an effort to continue to strive to have a clear mind, so that you can continue to go forward and visualize and have amazing ideas. The challenge in it is not to overthink things and keep a flow going. All of the Knights in this tarot deck have horses; I think it’s interesting that for the Knight of Swords, who is actually flying through the air with birds on his horse, is embodying both the heft of the four-legged creature but the airy-ness of the winged ones. It’s that idea of remembering to stay grounded, get enough sleep, eat well — not just be in the studio for two days straight!

This is also about paying attention to your dreams, and the whole spread here, because it has so many swords in it, points to dream life as a big theme for this year. There’s a mix of cards here talking about becoming rooted, fear, darkness, flow … but overall there’s this theme of visualizing and dreaming from the sub- and super-conscious areas of the mind.

MM: We’re actually starting the year with the special Magritte exhibit at the Art Institute of Chicago, which has a lot of surreal imagery that is heady but also dreamy. The marketing slogan they’re using for it is “UNTHINK.”

DF: YES! That is totally what this is: dreaming and unthinking, the idea of thought flow, but not thought control. DF: Spring is going to be all about balance with the Three of Swords. It’s associated with the astrological sign of Libra, the scales, and offers a challenge to regain balance and revisit fears and worries. With the new year of 2015 it’s a good time to make plans and resolutions, but that leaves a lot of people who look back and think, “Oh shit, I didn’t do anything!”

MM: For graduating students the spring semester has the BFA and MFA shows, the culmination of everything from your studies. You start preparing for that when you get back from winter break.

DF: The thing that’s so beautiful about this card is that even though it looks really dark and it’s called “sorrow,” there’s more to it. Aleister Crowley said that this isn’t a tearful kind of sorrow, it’s more of a trance, like the period the Buddha goes through before attaining enlightenment. It’s this waiting, a dark, quiet period that asks you to let go of expectations and fears and just be in that abyss. No matter how much you struggle, you’re not going to get out of it, so you may as well just be there and be present. Then, keep in mind that since all things must pass, it will change. That trance state is really beautiful to associate with the idea of sorrow.

MM: Would you say that this, for certain, denotes a difficult time?

DF: If you can’t embrace it and can’t work with that darkness, then yes, it will be a dark time. But if you work with it, then it will have rewards; that’s what you students are all there to learn or to continue to work with. If you work with your emotions and filter them to make great art, that isn’t always fluffy and happy… I think all of you already know that! It’s about maintaining balance, regardless of what is going on. 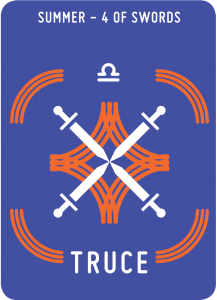 DF: This is the Four of Swords, a kind of ending. When we pull the next card I think we’ll notice that it’s not going to be a sword, because this here shows a coming to a truce with all of this very heady sword visualization. Even though this is a temporary truce, it gives a structure to end with to enable the beginning of something new.

MM: This looks balanced. It’s the only symmetrical card here.

DF: Yes, and this is also Libra again. It’s a crossroads (points to where the four swords meet). A lot of the people at the end of the spring semester and beginning of the summer will be at a crossroads. It’s important to remember what you’ve accomplished in this realm (points to the other cards), although the world may seem very chaotic; remember how your worked through everything, how you learned to be a conduit for inspiration, how to allow all of your knowledge to come to a structured place.

This is about saying, “OK, I learned how to do this, and now I can learn how to do something else. Now I can make it happen and make it work.” And then you jump into the choppy water and work. (She points to the last card, “Works.”) 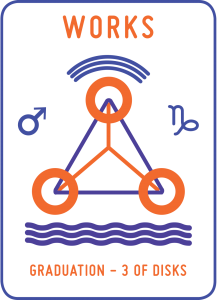 MM: That seems like a really appropriate card, and like you thought, it’s not a sword. Is that a water card?

DF: This is actually a disks card. We started here with disks (the “Worry” card for the SAIC student body), and then we end here with another disks card. That’s very strong, because with this layout it’s an upright triangle and each of the points has a wheel on it. It also features Mars and Capricorn. Mars is about willpower, strength and conflict; Capricorn is about just doing your work. So now, you have the tools, so do the work. You’ve already reflected on yourself and have gotten to know yourself a little better. You may have even found an artistic partner throughout this, and now this “three” is the enlightenment that comes. Remember how we were talking about that trance? Look at the Three of Swords and the Three of Disks; they’re totally different.

MM: (Points to Two of Cups.) And you were talking about this card at the beginning. So over the course of the year it was first about the two, and then you work to find that third, so at the end you get three!

DF: Yes, and that’s where the real work starts. (Laughter.) The Three of Disks is about producing, even if you feel like you are alone in a stormy sea, and utilizing the structure you’ve created for yourself. You have control over which way to go, and because of that, it doesn’t even matter what’s going on around you. You just produce.

Arts & Culture What’s in the Cards 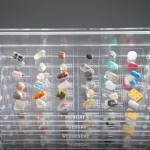 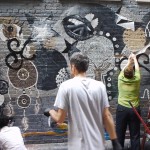 Art and Street Culture: The Making of the Murals