Kenneth Goldsmith shapes the Internet into crowdsourced poetics, co-opting existing and open-source information into questions about the shapes of art’s contexts and the meanings of authorship. 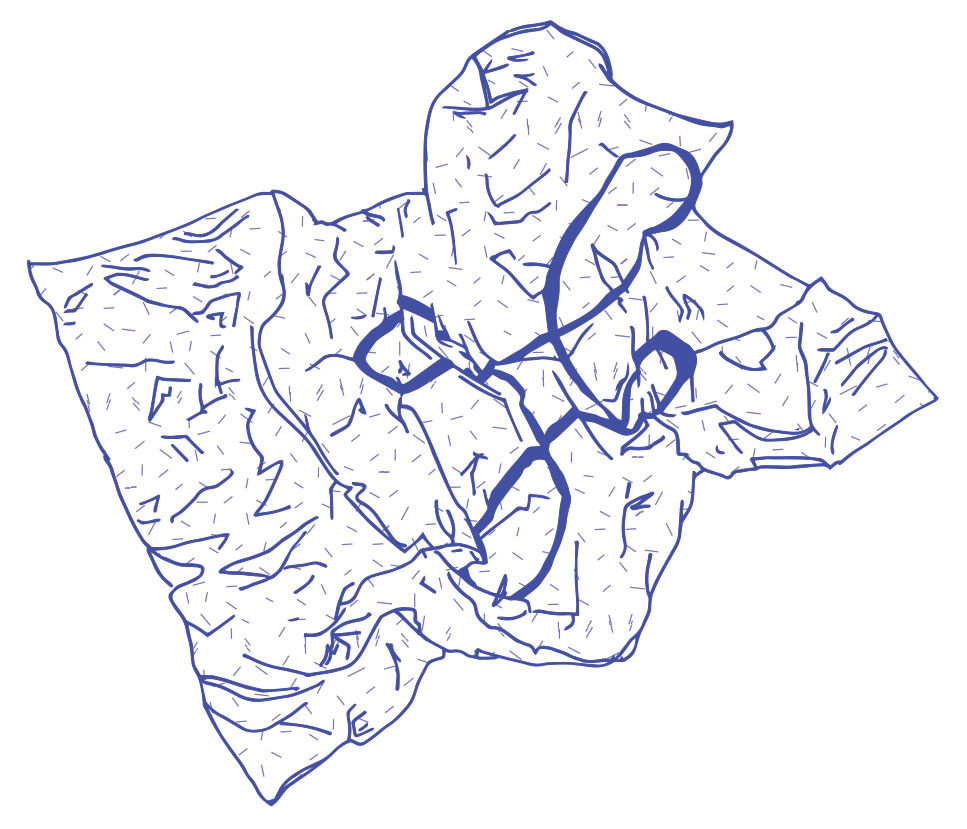 Illustrations by Anna B Smylie

In Düsseldorf, Germany, 250,000 pages of scientific treatises printed out from JSTOR, the paywall-blocked digital trove of academic journals, sat in teetering stacks that no one read. JSTOR Pirate Headquarters, housed in a makeshift library-meets-workshop complete with chrome reading lamps and desktop computers, was equal parts performance art and Internet activism and part of Kunsthalle Düsseldorf’s Smart New World exhibition that ran through August 2014. American poet, writer and artist Kenneth Goldsmith worked with the institution for this show which explores the costs of individual freedom in an age where power and knowledge are ruled by access to data. He organized five art student volunteers to print out and arrange a cache of material that was an estimated 33 gigabytes and would cost around $353,229 to buy directly from the company’s archives, according to Goldsmith.

The installation is a manifestation of a slippery truth: a fraction of a fraction of digitized knowledge, made material, not only takes up a lot of space but is also impossible to fully consume because of its sheer size. Even if no one were actually to take the time to sit and read through the thousands of pages of obsolete information, Goldsmith challenges why even the most “useless” of knowledge is shielded from the public and granted only to those who can afford to pay for its access.

JSTOR Pirate Headquarters emerged from Goldsmith’s summer 2013 collaboration with LABOR Gallery in Mexico City entitled Printing Out the Internet, a crowdsourced project in which the artist encouraged anyone and everyone to print out whatever they wanted from the Internet, as long as that content actually existed somewhere online, and mail it to the gallery to shape a large-scale poem. The results consisted of a one-room arrangement of dozens of Bankers Boxes piled high with printouts of memes, email chains, credit card files, source code for unknown computer programs and a large amount of pornography — a true cross section of the World Wide Web. Both projects are his tributes to programmer-activist Aaron Swartz, who fought for freedom to information and committed suicide in early 2013 after being accused by U.S. federal prosecutors of breaking several laws by hacking into JSTOR and downloading nearly 14 million scholarly articles to place them into the public realm. Swartz, like the artist, pushed for equal access to educational materials and performed actions that proclaimed the public’s implicit rights to privatized resources.

Goldsmith, who was named MoMA’s first-ever Poet Laureate in 2013 and has read his poetry at the White House, has shaped a career that has been marked by explorations around themes like quantity, quantification, re-contextualization and materialization. His work addresses the immensity of intangible resources, such as words within languages, which cannot be imagined nor controlled because of their sheer volume and permeation into social patterning. His books, among others, include Soliloquy, a transcription of every word he spoke over the course of a week in April 1996, Day, the entirety of the September 1, 2000, edition of The New York Times word-for-word, and The Weather, a year of typed-up unedited weather reports.

Even though Goldsmith has described himself as “the most boring writer that has ever lived,” his projects employ a highly intellectualized activist approach to the same basic process that marks Tumblr-ing, tweeting, or re-sharing found content in general: co-opting existing material and placing it into the contexts and confines of new mediums or different iterations of similar media. Goldsmith has placed printouts of his writing within the confines of galleries and museums as statements on the social worth and cultural capital afforded to such institutions, which, although they may be operating with an intent for public accessibility, often unconsciously employ jargon that obscures and excludes understanding and engagement with art. Ultimately, he seeks to hack the vehicles for words and ideas in order to liberate them into open forums.

Goldsmith skyrocketed into the public eye and was met with a hotbed of criticism for Printing Out the Internet ahead of the show’s opening in summer 2013. Aside from accusations of the frivolity or stupidity of the endeavor, both media voices and lay commentators pointed out environmental concerns for the amount of paper utilized for the project and the costs of fuel needed to courier the submissions from over 20,000 people from around the world. The resulting discourse engendered by the debates of the project’s worth versus its buzzworthiness only generated more fuel for the six-meter high pile of paper in the gallery installation: over a thousand more printed pages of all of the press coverage were added to the stack that weighed in at a grand total of about ten tons. 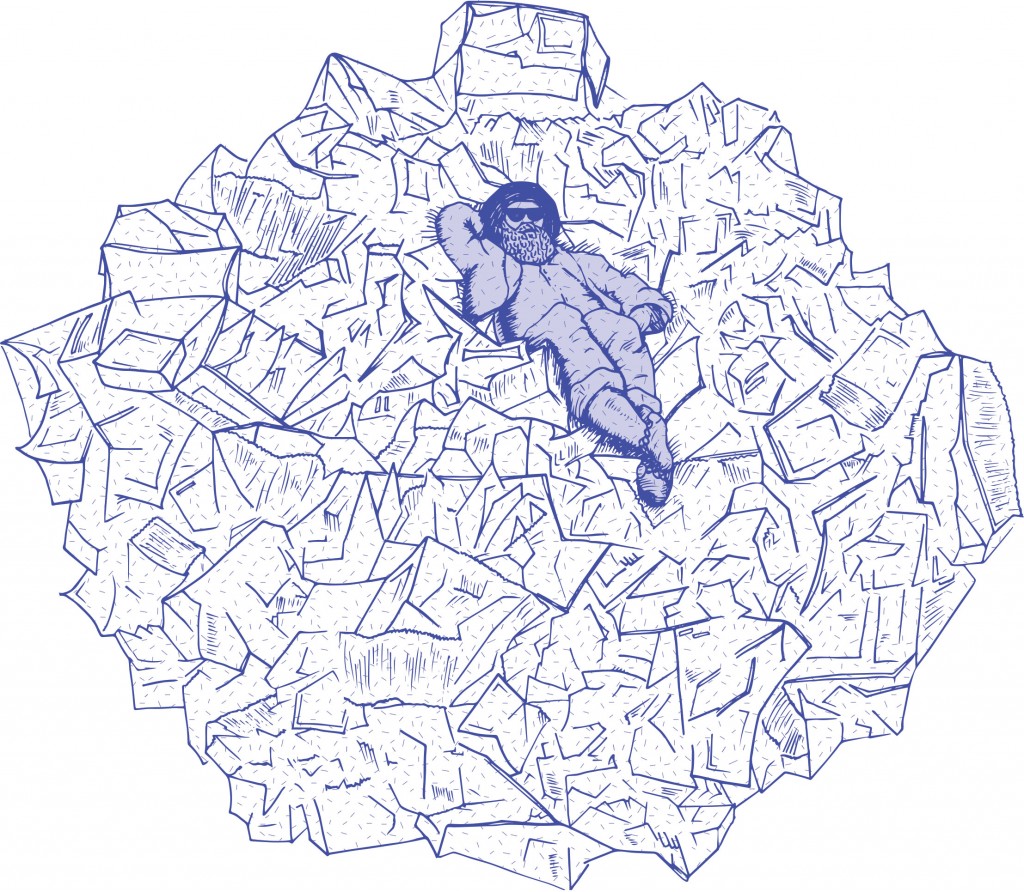 In a July 2013 interview with the Canadian Broadcasting Corporation’s As It Happens, Goldsmith defended the impetus behind Printing Out the Internet as being another statement on accessibility and money, pointing out that the contemporary art world, because it is a product-driven enterprise, has hidden and rarely-discussed environmental costs: “This [project] is spectacle. All art is spectacle and all spectacle is material and all material carries an environmental cost,” he explained. “However, compared to all of the other spectacles for which one has to pay great amounts of money to see, or great spectacles of art in the contemporary art world, where one can purchase that spectacle for $35 million dollars, as in the case of Jeff Koons’ sculptures comprised of strip-mined aluminum, nobody ever talks about the cost of moving those enormous sculptures from a collector’s warehouse to a museum, or the horrible environmental costs of private jets and private yachts that end up at the Venice Biennale. And yet, if someone sends in some paper, it’s accused of being an arboreal holocaust.” He continued to elaborate that the project, because it is crowdsourced and open to all, is an inclusive enterprise that speaks against the art world as “an elitist, exclusive place that is increasingly becoming available only to wealthy people.”

Just like Goldsmith’s interpretation of the contemporary art world, the digital divide is essentially split into those who can afford to pay for access to resources, knowledge and materials and those who cannot. Most people from all over the world fall into the latter category, and they often rely on free, open source or pirated materials to learn and better their socioeconomic standings. His project addresses an increasingly urgent issue in contemporary culture regarding the free flow and availability of information, but also speaks to the impossibility of understanding just how much data there is in the world. Even in the sense of digitalized resources as being inherently non-material, they are still seen as tangible capital that separates into haves and have-nots and accumulates in archives governed by monetary standards.

Through encouraging people to physically print off and translate the immateriality of the Internet into a material form, Goldsmith is provoking his audience to take charge of their own implicit rights to knowledge. As Goldsmith tweeted on August 27, 2013: “Secretly, what people hate most about Printing Out the Internet is its democracy; with a simple, command + p, anyone can be an artist.”

Artist as User, as Curator, as Hacker

The final wink that Goldsmith employed with Printing Out the Internet is that each of the thousands of worldwide contributors are readily acknowledged, but not within a gallery brochure or in any other printed, physical form: everyone’s names are readily listed on a still-accessible public Tumblr page. With this action, the artist is again placing participation and information back into the public realm; if all of the collaborators’ names were to be printed in vinyl on a gallery wall or included in a catalog, only those with means to access the physical gallery space in Mexico City or purchase that material would be able to view the long list. Instead, Goldsmith used a free social media platform to “liberate” these names for the world to readily access while also monumentalizing participatory efforts.

However, much like the printed content that these contributors sent in which no one would realistically ever look over in entirety, this Tumblr page is a collection of text that is difficult and impractical to actually read through. In this sense, Goldsmith has again co-opted existing material — in this case, the materiality of people’s names — and placed it into a different context as a creative act. Ultimately, the crowdsourced nature of the project would have been impossible without the Internet itself, for the dissemination of ideas and news surrounding the project only fueled more participation.

Goldsmith’s Internet printing projects position him as an artist-hacker; he co-opts existing and open-source information into questions about the shapes of art’s contexts and the meanings of authorship. The heart of the criticism that surrounds his work is the ongoing debate regarding the guise of art in an age of digital accumulation: are the acts of “posting” or “printing” considered creative statements? If one is to change the context of an object or an idea, tangible or intangible, into another form, or to place an object or an idea within a sphere that it was not originally intended to be encountered within, does that constitute an artistic statement?

The process of “sharing” that is embedded in Tumblr and other social media platforms could suggest a roundabout approach to creative discourse, or that those mediums’ processes of recontextualization could just be another form of tastemaking rather than artmaking. However, as Goldsmith has shown, the Internet, be it in its physical or its immaterial form, enables artists to play multiple roles and redefine the labels of their actions. The artist becomes a “user,” but also a “blogger,” “writer,” “curator, “critic” and “hacker.” 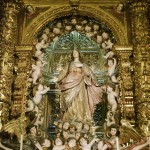 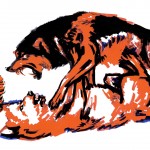