A new SAIC student-led gallery adds its own flavor to Pilsen.

Student-led gallery adds its own flavor to Pilsen 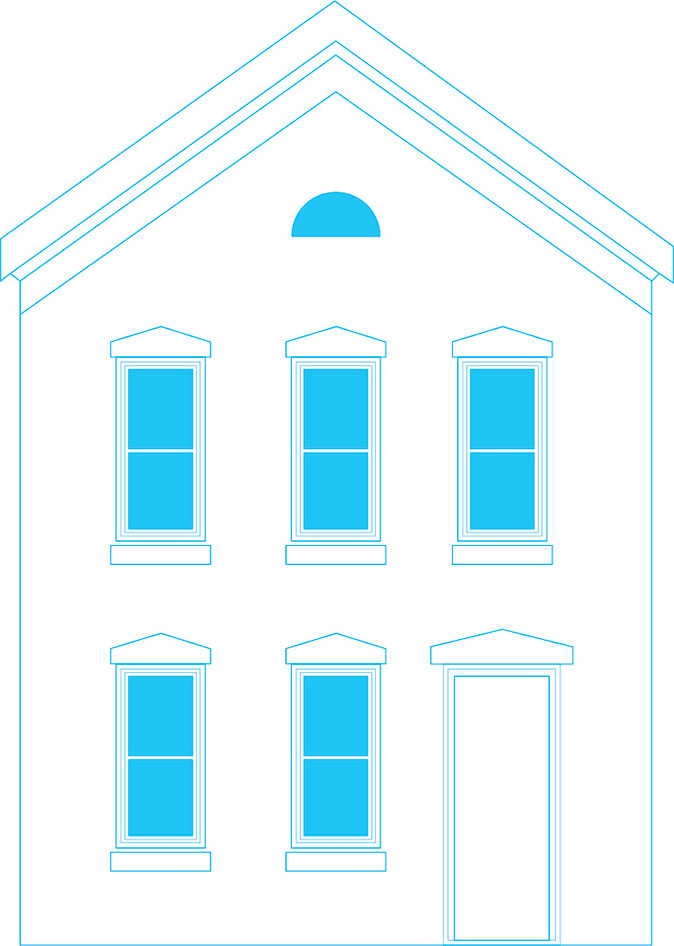 The lower west side is frothing with new artistic endeavours bearing the stamp of the SAIC student community. A recent addition is the student-led apartment gallery FLAT, created by SAIC graduate students Natalia de Orellana, George William Price, Olivia McManus, and Beatrice Schmider. Its opening night on February 28 was a sheer success, as the turnout exceeded the organizers’ expectations. Despite — or maybe thanks to — another two openings in the area that same night, the space was filled with both SAIC and non-SAIC art enthusiasts. The initial idea for FLAT emerged several months ago, during a visit to Pilsen’s “2nd Fridays” open studio night. “It didn’t appear to us as a great example of what actually happens in Pilsen and the potential of the space,” explains Price. “Then we thought, what is stopping us from creating our own space? And we realized nothing was,” said de Orellana and McManus. “The project also emerged from several conversations we had had about the fact that we weren’t working with MFA students,” explains Schmider. FLAT’s first exhibition, titled VISUAL ENDS: The Edge of Perception, focuses on notions of ephemerality and intangibility. It includes work from three SAIC students and a collaboration between SAIC first-year graduate student in the Arts Administration program George William Price and Viennese artist Nicole Prutsch. 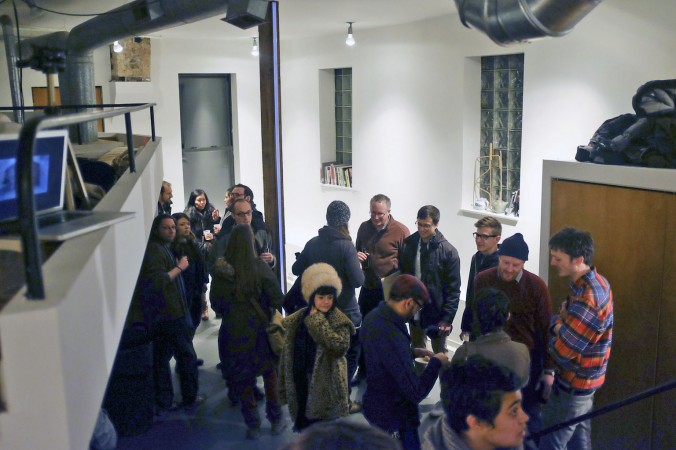 First-year graduate student in the sound department Austen Brown presented Untitled, an installation made of minuscule glasses mounted on a flat wooden square on thin stilts. The ensemble, organized in time and space by use of a self-generating algorithm created by the artist, looks like a small pasture of strange mushrooms of varying sizes. Each “mushroom” produces a synthesized “click,” a very pleasing sound that resembles two clinking shingles. The wires connecting them to the power source look like roots. 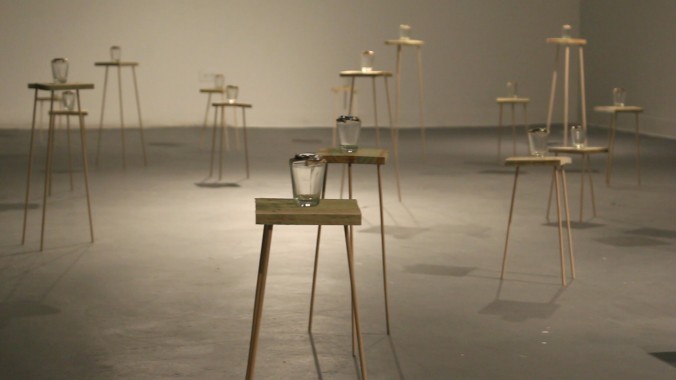 Gradually, the sound intensifies and transforms into some sort of rain. What started as an almost imperceptible sound soon becomes impossible to ignore. “I was interested in how individual points can come together and retain some sense of autonomy in different states,” explains Brown. “Whether they have room to be identified singularly, or when everything becomes squeezed so tightly together that the perception of these independent systems becomes one collective mass.” After some time, the rain of pebbles is so loud that visitors are forced to turn around and satisfy the installation’s desire for their full attention. By the end of the night the audience started going in and sitting with Brown’s piece. “I found it fascinating that such an interaction happened,” says Price. “This could have never happened in a white cube gallery.” Tobias Zehntner’s piece Skyline isn’t immediately noticeable in the space. As they sipped on their wine, several attendants would exclaim in the middle of the conversation, “Oh look, I didn’t even notice that was here!” This vertical light structure, like Brown’s piece, alternates between making itself almost invisible to completely unavoidable. Skyline is a 24-minute loop representing the way light changes throughout the day. The tube of light alternates from pastel colours to deep blues. Zehtner’s other work, Untitled (Two Bulbs), is a dialogue between two sources of lights, between two bulbs, placed at two opposing corners of the apartment. The piece opens up the space, gives perspective, and forces the audience to sweep the entire room back and forthwith their eyes. Before opening the space, Price, McManus, de Orellana and Schmider did some research about similar spaces. They mention Queer Thoughts and the Slow Gallery as inspirations. “Chicago has this fabulous history of DIY and apartment gallery spaces,” says Price. “So we are not doing anything new, just developing and building on that legacy in order to create a platform,” he adds. Initially intended for SAIC students, FLAT is hoping to branch out to emerging artists, as well as to other art students at UIC or Columbia. VISUAL ENDS also incorporated a medium that most curators struggle to present in an exhibition: the written word. This feeling will last forever by Lauren Pirritano was printed in a limited edition and distributed to visitors at the opening. The four curators expressed their interest in experimenting with different art forms, and giving as many emerging artists as possible opportunities to take risks. “We are also thinking of developing a side publication,” they told F Newsmagazine. “We would like to provide a platform that extends beyond the gallery space yet remains in conversation with it.” On the opening night, SAIC graduate student George William Price presented a performance piece in collaboration with Vienna-based artist Nicole Prutsch. Aktions Ubertragung: Dust from Perinetkeller, Wien to Ruble Street, Chicago is a transcontinental performance enabled through a live video feed projected on the apartment gallery wall. At 8:30 p.m. George William Price steps “on stage,” and the attention in the room is at its height. He stands in front of a wall where the image of what looks like an empty cave has been projected since the beginning of the night. This cave is one of the Viennese Actionist Otto Muehl’s studios in Vienna. As Price steps into the performance space, Prutsch, some 4,700 miles away, does the same, and she appears on the gallery wall. The two performers stand there, naked, facing each other, or rather, Prustch is facing her web camera and Price is facing the wall onto which she is being projected. A minute into the performance, the image freezes, a message appears on the wall “ There was a communication error during your chat.” Someone whispers in the audience, “This was live? I thought this was a recorded video.” The technological error had the benefit of revealing the live nature of the piece. Price resets the video conference, and the performance starts again to remain uninterrupted until the end. 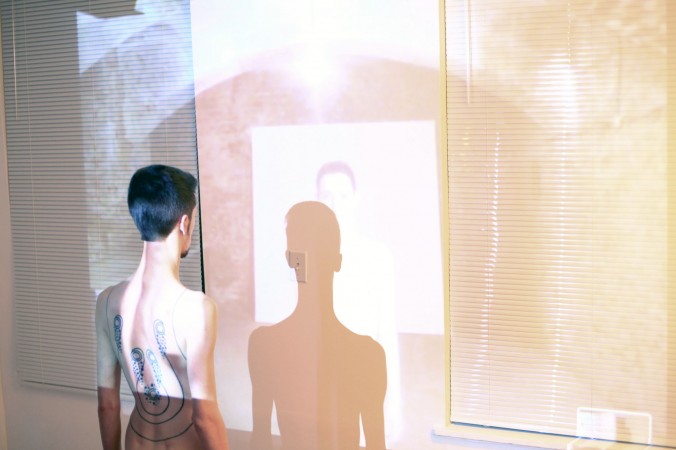 Following their own interpretation of a score by Muehl, the two performers empty buckets of paint (red-orange for Price and deep blue for Prutsch) on their respective bodies, beginning with their front sides. They perform a set of simple movements; sticking their tongue out, opening their mouth, sitting down, standing up and facing different directions. The performers empty their second bucket on the back of their bodies. Price walks up to the wall to face Prutsch. The video feed, projected from behind Price onto the wall ends up  projected onto his backside, and Prutsch’s blue naked body appears on Price’s orange naked body. The floor is slippery because of the paint. Price grabs his last bucket, empties it completely in a quick movement over his head, and the audience gets splashed with copious ammounts of paint. The final part of the performance involves a pile of dust, shipped from Otto Muehl’s studio all the way to FLAT in Chicago. As Price slowly grabs the pile of dust to gradually pour it on his head, he is accompanied — without his knowledge — by the silent choreography of the crowd passing around napkins and tissues to blot the paint off their clothes. The video conference stays once the performance ends, projecting the explosion of blue paint from Vienna above the orange splatter covering the floor here at FLAT. The four founders of FLAT are already thinking about the next exhibition, considering how they can keep on building from this first project and how they may attract more local, national, and international artists. According to the group, the main drive behind this new apartment gallery is to showcase “artists in dialogue with each other rather than heavily applying a curatorial thematic onto the show.” Learn more at www.flatspacechicago.com or contact flatspacechicago@gmail.com 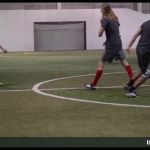