Paabus’ Own Panopticon at The Sub-Mission

Kristina Paabus’ “box for each of us” at The Sub-mission comments on our present day Panopticon. 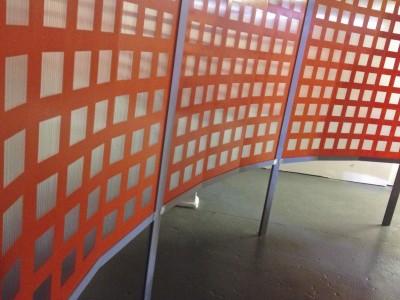 “a box for each of us” at The Sub-Mission.

On November 15 at The Sub-Mission, Chicago artist and former SAIC Printmedia professor Kristina Paabus unveiled her new work, a box for each of us. Mounted in the gallery below The Mission, the site-specific installation is a single, bright orange linear structure made of plastic, wood, and paint. Centrally positioned in an arch shape splitting the room in half, the work at first resembles a wide screen, puzzling after wandering down the creaky basement stairs. There is far more than meets the eye with a box for each of us. The minimal installation conveys a sleek monumentality, but contains subtle detail.

Designed in Iowa City, where Paabus is currently Visiting Professor and Grant Wood Fellow in Printmaking at the University of Iowa, a box for each of us explores ideas of confinement and surveillance. As the title suggests, visitors may imagine themselves in relation to one of the many translucent boxes.

Paabus explained, “It can be viewed as though each of us is placed in a box, defined by some categorization, or even like checking off a box on a form.” The piece refers to the reality that our lives are under observation at all times, even in private spaces and to an unknown degree. Influenced from Paabus’ curiosity with the NSA, this element of mystery is highlighted through the opaqueness of material that each box possesses. Although another visitor can be seen through the construction, the details that make up individual identity remain obscured.

Of even greater influence was philosopher Jeremy Bentham’s theoretical design for the Panopticon (meaning “all-seeing place”) and its usefulness for prisons. Bentham’s model was used to understand the importance of surveilling an institutions’ occupants (often those involuntarily housed), such as schools, theaters, hospitals and factories. The model is circular with the surveyor positioned centrally, typically in a tower. Economically efficient, this method requires only one person to oversee at a given time. However, the Panopticon does not actually allow for each individual to be constantly on view; instead, the model promotes fear and paranoia since it is never known when one might be watched. It constrains tenants both physically and mentally, and like Paabus’, each individual cell does not allow for outside view or communication. Residents cannot reverse the gaze toward authority.

Although the subject matter might provoke an attitude of defiance, especially with what seems like endless personal violations of privacy experienced on a daily basis through technology, the internal part of the arch seemed to be where everyone naturally gravitated. The placement of the work almost requires visitors to come inside, or else stand awkwardly on the perimeter. Once inside the encompassing structure, the distinct, sharp angles of the frame provide a clearer reference to the construction originally proposed in the late 18th century as a humane and utilitarian approach to discipline.

The lighting also heightens the awareness of one’s surroundings and sense of paranoia derived from considering the objectives of the work. From a corner, just one light is projected on the piece. The dimly lit display is an uncomfortable reminder of being watched, comparable to motion-censored lights found in yards to expose trespassers. Contrarily, the opening provided a lively setting full of conversation and constant interaction with the piece. Although our comfort within the work for socialization was accompanied by the eerie feeling that our relationship to surveillance, in the system we live in today, is truly pervasive.

A box for each of us is on view through December 21 at The Mission located at 1431 W. Chicago Avenue. For hours and more information, visit themissionprojects.com.

Arts & Culture Paabus’ Own Panopticon at The Sub-Mission
« Previous Story 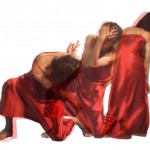 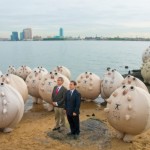 A Call to Collaboration