You Can’t Write 300 Pages on Your Toes

On October 9, 2013, famously satirical writer and Macarthur Fellowship recipient George Saunders delivered a lecture at The Arthur Rubloff Auditorium as a part of the Visiting Artists Program at the School of the Art Institute of Chicago. Saunders was introduced by SAIC Faculty member Adam Levin, Assistant Professor in the Writing Department — a former student of Saunders and self-confessed fan. Well known for his eerily surrealist exploration of the strange intersection between humor and deeply saddening themes like death and suicide, Saunders’ reading from “Tenth of December,” the titular short story from his new book, was no less.

For those of us who were present, chuckles and admiration came so easily that it was not at all difficult to understand why the man standing at the front of the room was widely regarded as the contemporary master of satire and the short story format. At the same time, Saunders’ demeanor was so affable that the experience was akin to being personally guided through the unbelievably distressing yet amusing last minute thoughts of his protagonist, Eber, as he lay in a frozen lake. Saunders decided to read out the passage and skip straight ahead to the questions, enhancing his amicability even more.

Born in Amarillo, Texas, in 1958, Saunders grew up in the south Chicago suburb of Oak Forest and went on to receive a B.S. in geophysical engineering in Colorado. He spoke of the strong influence of Hemingway on his early writing as a being a “sort of a dead end.” “There wasn’t any meaningful intersection between my life and his. The stuff that I knew in my gut—the deep, sad stuff—was mostly about lower middle class life and screwing up in a comic manner but not really that funny,” he said by way of explanation. 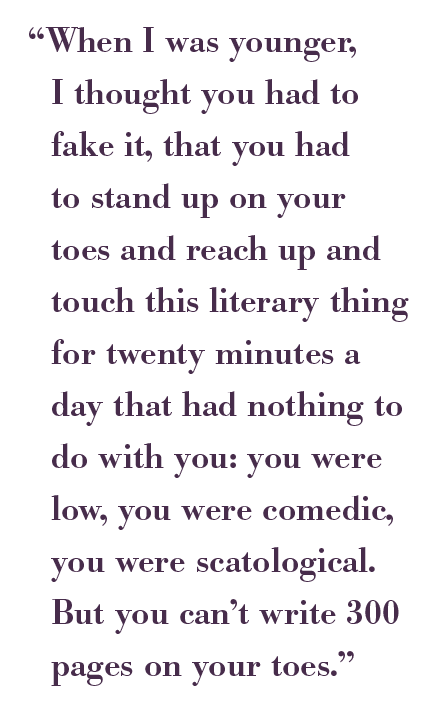 As he proceeded to speak about his method of tricking himself into getting out of “Hemingway mode” by staging stories in a theme park, Saunders touched upon the reader-author dynamic and how it is guided mostly by misconception. “I teach at Syracuse and one of the things I like to point out to my students is that we are given this idea that the author knows what she wants to accomplish … that the reader is supposed to sit there as she pulls up this big maneuver truck with all her stuff in it and says, ‘Here you go!’” I laughed as I marveled at the clarity of his metaphor and the odd but somehow important choice to refer to an author with a feminine third-person pronoun.

While answering subsequent questions, he spoke about how people come to be a particular kind of author. “You trick yourself into being your best prose self, by any means necessary, and that may not be entirely unrelated to you personally.” The atmosphere tightened; one could almost see everyone leaning a bit closer, waiting to hear the words that they knew they had come for. “When I was younger, I thought you had to fake it, that you had to stand up on your toes and reach up and touch this literary thing for twenty minutes a day that had nothing to do with you: you were low, you were comedic, you were scatological. But you can’t write 300 pages on your toes.” By this point, we were all in a Saunders story, imagining ourselves connecting with the genius standing on stage and reveling in the simple joy of knowing that what he had was attainable by us too, simply because he said so.

Perhaps it was the absolutely unapologetic yet open manner in which Saunders spoke about his work, or perhaps it was his encouragement of the audience to find and accept their true selves. It may have been his playful jokes about becoming a feminist after the birth of his daughter and writing non-fiction to impress her. Or, maybe it was all of those things that have made it easy for me to proclaim that Saunders is a “writer of the people.” When I told him that I too was an engineer by education, he encouraged me to write to him and keep in touch. “We engineers gotta stick together,” he said, and I know that through the sheer memory of his engaging manner and the mastery of his writing, we will.

Who Can’t Make Art at SAIC?