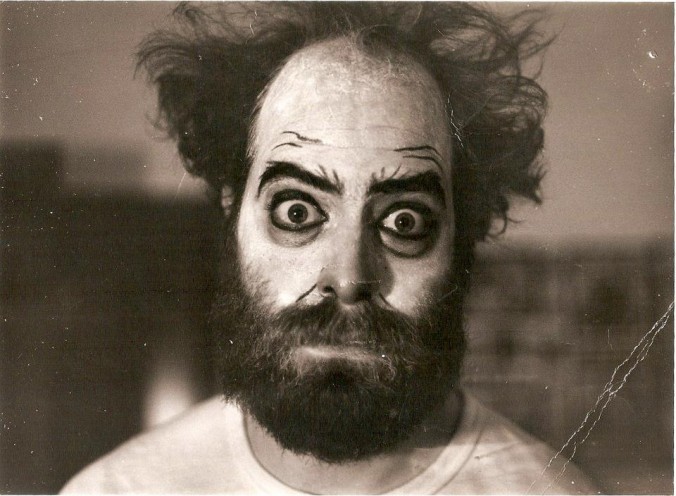 As the son of UPA and Terrytoons animator Gene Deitch, Kim Deitch grew up in a world of whimsy. After a brief stint in art school and a range of odd jobs from Merchant Marine to orphanage counselor, Deitch made his way into the thick of the underground comix scene in New York in the 1960s, befriending the likes of Spain Rodriguez, Art Spiegelman and Robert Crumb. His psychedelic tale of an alcoholic animator, “Boulevard of Broken Dreams,” earned critical acclaim, and “Stuff of Dreams,” the serialized version of his graphic novel “Alias the Cat,” received an Eisner award for Best Single Issue or One-Shot in 2003. Deitch, who will be in Chicago this weekend as a special guest at the Chicago Alternative Comics Expo (CAKE), shared his story and inspirations with F Newsmagazine. 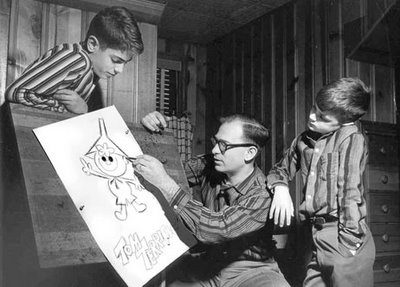 From left to right: Kim, Gene and Simon Deitch. Photo courtesy of the artist.

Nicole Rhoden: Much of your work, like “Boulevard of Broken Dreams” and “Alias the Cat,” incorporates 1930s-style cartoon imagery into dark, surreal stories. As a child, did you find something sinister about being surrounded by your father’s cartoons, or did that mindset only emerge later on?

Kim Deitch: As a child I found nothing especially dark and sinister about cartoons. It was a part of my life for as far back as I can remember. In fact, up to the age of five there was nothing very dark or sinister about my life at all. It seemed, for the most part very merry, full of fun and novelty. Around age six something happened. I started to become more shy and withdrawn. We moved a lot. I’d bond with a set of kids and then off we’d go, following Dad to the next job opportunity on his meteoric rise higher and higher in the animation business.

Then finally, also animation-related, my parents divorced and the family fell apart. Life caught up with me.  Although curiously, after my father left, I came into my own, became markedly less shy and withdrawn. I started to become my own person with my own ideas. It seemed I’d been under my father’s thumb but didn’t know it — until he left us. 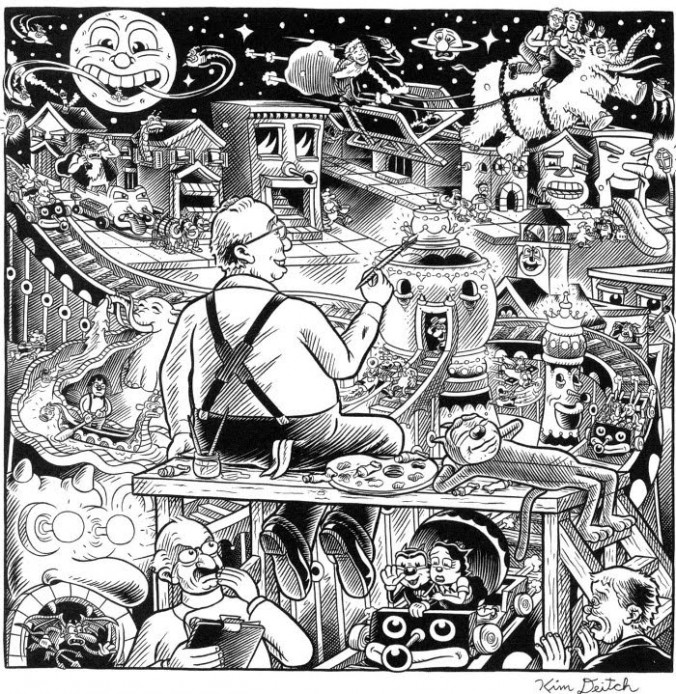 A page from Boulevard of Broken Dreams. Image courtesy of the artist.

NR: When you got to know Spain Rodriguez, Robert Crumb and other members of the underground comix community, did their styles and influence clash with what you had learned from your father?

KD: Yes, it did. Knowing them and others in those days gave me a clearer picture of what I was up against, and it opened up my mind to the possibilities of art over and above the bullshit modern art I had been so very exposed to growing up. Crumb in particular became, and still is, my artistic idol. Trying to compete with him egged me on to become a better artist than I probably otherwise would have been. Think about it.  Before Crumb, who was hot? Jules Feiffer? Why, there’s no comparison. Knowing Crumb was like meeting a great classical artist from another, greater artistic age. Knowing him and falling under his sway, seeing his artistic integrity close up, was a pearl of great price. It was one the the greatest things that ever happened to me. Although curiously, I feel similarly about my father, in spite of what I said about him earlier. I have been very lucky, and smart enough to understand that. Over time, I believe I have cultivated the right attitude about it too.

NR: You’ve collaborated quite a bit with your brothers, especially Simon. How do you think this family dynamic affects the work produced?

KD: I feel very glad to have had the opportunity to collaborate with both of my brothers. Indeed, I hope to eventually do some more stuff with my brother Seth. Simon was a huge influence on my getting into comics in the first place. Before his brains started falling out of his ears, he was one smart cookie too, and I learned a ton from him. It’s just too bad that he wasn’t too interested in learning a bit more from me. We had some great innings though — but let me tell you, they were hard won. Of course, you have to understand, I’m a workaholic and volatile too. I don’t always have as much patience as I perhaps should have when someone can’t keep up with me, but I get things done. 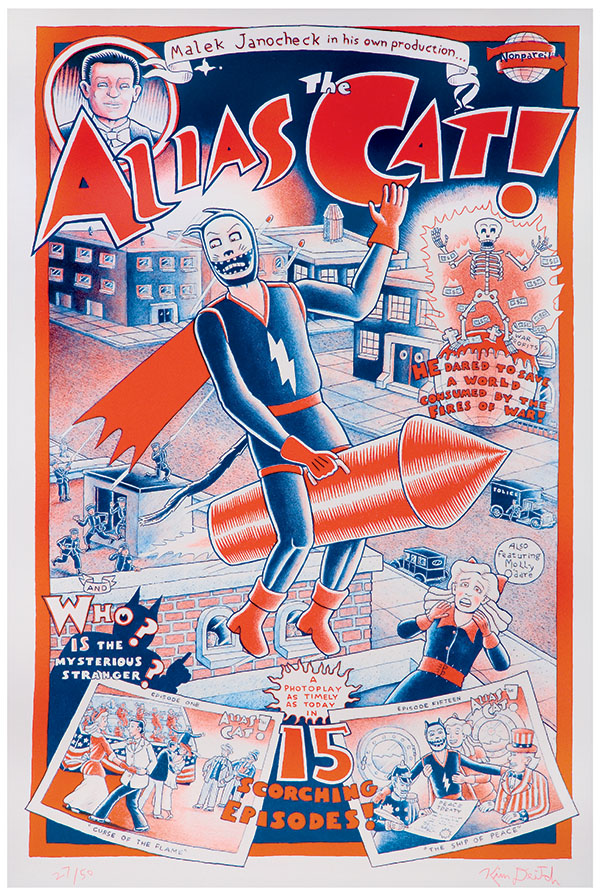 “Alias the Cat” cover. Image courtesy of the artist.

NR: Growing up reading comics as a kid, do you remember being directly affected by Fredric Wertham’s work and the introduction of the Comics Code Authority?

KD: I sure do. My mother was reading “Seduction Of The Innocent” when it was running as a serial in Coronet magazine. And she landed on our comic reading habits big time. Look at what it got her; kind of ironic, huh?

NR: Comics are still facing censorship issues today. Why do you think comics are so prone to coming under moral scrutiny?

KD: Well, gee. It’s such a morally degenerate field and is getting more so every day, just like everything else in this fucking world. Of course, people haven’t really changed so much. These days they just get away with a lot more, or seem to.

NR: What was it like switching to a kid’s project like “Southern Fried Fugitives” for Nickelodeon Magazine in the ‘90s?  Was your process the same?

KD: I liked doing The Fugitives. It was an interesting challenge. A big reason why I liked doing it was I liked all the people over at Nickelodeon very much. The process was different in that everything had to pass through a committee of people. To tell you the truth, I’m surprised that didn’t bother me more than it did. I figured it was what it was, and I made the best of it. It helped a lot that I like liked everyone, even though I didn’t necessarily agree with them over every little thing. I consider myself to be a kid-friendly person. I would be open to doing some kid stuff again. In fact, one of my favorite of my stories is “These Cats Today,” which I did for Raw jr. It was an Art Spiegelman deal. Art’s a great editor, and working with him is always a good learning experience.

NR: You mentioned in an interview with the Comics Journal that you were encouraged to pursue comics because you could draw as well as the creator of “Captain High” in the East Village Voice, but then at one point you were so intimidated by Crumb that you took a short break from the industry. What advice do you have for young artists weighing themselves against their peers, wondering if they measure up?

KD: My advice is, don’t be a pussy; nothing ventured, nothing gained. Train yourself to work hard. Get into physical fitness. It will do a lot more for you than just make you physically strong. It will get you used to challenging yourself. It will sharpen your mind up too. Study your peers. Try to learn from the ones who are succeeding. Don’t be afraid to be competitive. It’s not like in sports, where there has to be a clear winner and a clear loser. In art everyone, at least theoretically, has the chance to win. It’s a great game, just like many other aspects of life. Try not to be so gimme, gimme, gimme, and endeavour to be more contribution-oriented. Be idealistic in a practical sort of way, and cultivate a clear goal of where you are trying to get to.

NR: What are you planning next?

KD: Right now, I am working on a book with a theme having to do with reincarnation — different related stories along those lines — a lot of stories in an autobiographical framework, but containing more fiction than truth.

NR: You’re coming to CAKE this weekend — have you spent time in Chicago before, or do you have any personal connection to the city?

KD: Well, my old man was born in Chicago, but my own exposure to it has been relatively superficial so far.  Maybe that will change one of these days. You never know.

Deitch will be signing at Chicago Comics June 14 from 6-8 p.m. He will be at Table 12 at CAKE Saturday and Sunday, June 15-16 at the Center on Halsted, 3656 N. Halsted, where he will debut his newest graphic novel “The Amazing, Enlightening and Absolutely True Adventures of Katherine Whaley.” For more information about Deitch’s work, visit fantagraphics.com. 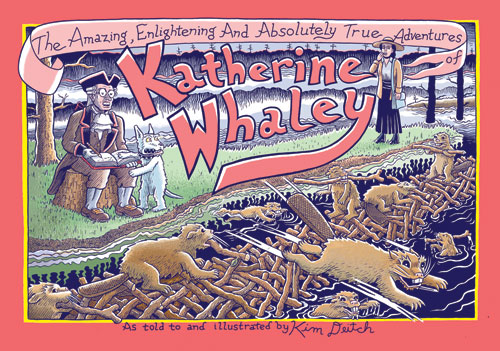 The Utopian Daydream of 3D Printing 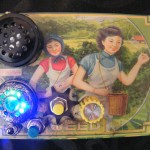 One Response to An Interview with Kim Deitch