“this needs to stop now or else it will be ‘game over for the planet,’ as they say.”

Over 200 people took to the streets on Saturday, February 16 in Chicago to protest the Keystone XL oil pipeline extension. The rally was arranged by the Chicago Youth Climate Coalition in solidarity with their fellow environmental activists in Washington D.C. who were protesting on the National Mall that same day. Environmentalists want President Obama to reject the extension of the multi-billion dollar project that would transport petroleum from the oil sands in Alberta, Canada to refineries in Texas, significantly increasing greenhouse gas emissions and gravely affecting the Ogallala Aquifer in its path in Nebraska.

Students, environmentalists, educators, community organizers, and urban agriculturalists all gathered at Grant Park and marched their way to the Federal Plaza calling on Obama to reject the pipeline. According to a recent study by Cambridge Energy Research Associates, Canada’s oil sands emit about 5 percent to 15 percent more carbon dioxide than average crude oil.

Students from the Environmental Action group and the Humanitarian Club at SAIC attended this rally in addition to other students from schools such as Columbia College, University of Chicago, and Loyola University.

Francesca Dana, a student at SAIC, and chair of the Chicago Youth Climate Coalition (CYCC), believes that the best way to stop climate change is through petitioning big decisions like the Keystone pipeline in addition to being more environmentally conscious in our daily lives by “gardening, recycling and being aware of our waste.”

Dana also talked about the current national divestment campaign calling for the administrations of different schools and large institutions to remove endowment funds from the fossil fuel industry “holding the belief that the fossil fuel industry is the primary cause of climate disaster” and that it is immoral to profit from climate disasters. “We will talk about this issue and bring it to the conversation [at SAIC], our cities and around the country, that this is the actual cause of the problem and that we can actually make a difference to stop it,” Dana added.

Jacob Goble, another student at SAIC and member of the CYCC voiced his concerns about the pipeline as someone who would be directly affected from it said. “I’m from southern Illinois which is very close to where one of the major refineries is, so it is real for me,” he said. Victoria Thurmond, also at SAIC and member of the CYCC and the Pilsen Environmental Rights and Reform Organization added that “this needs to stop now or else it will be ‘game over for the planet,’ as they say.”

Cassandra West an adjunct lecturer at Medill School of Journalism at Northwestern University attended the rally. She spoke to F Newsmagazine of the importance of finding new economic models for energy that will respect what the Earth offers us. The best way to stop climate change, West explained, is by putting pressure on our elected officials and to think of “the choices we make and how we spend our money on products that may use chemicals and fossil fuels.” 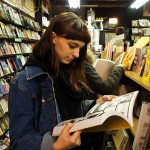