Rage Against the Machine: Nurses’ Union Kicks Off Weekend of NATO Protests

Hundreds of registered nurses, wearing red scrubs and feathered caps, meant to evoke Robin Hood, stormed Daley Plaza demanding economic justice and corporate accountability. The rally hosted by National Nurses United was one of the first of the demonstrations held against the 2012 NATO Summit.

Nurses assembled in Chicago as part of a nationwide campaign to “Heal America, Tax Wall Street.” Nurses are on the front lines of our sick economy — everyday they tend to patients who can’t afford their medications, prenatal care, and other essential services. National Nurses United advocates for “expanding and improving Medicare to cover everyone, with a single standard of care for all.” The Union blames “big insurance giants [that] deny more than one-fourth of all claims.” They also point out that in the US, health insurance is tied to employment, which makes citizens especially vulnerable if the economy sours and employers respond by administering cuts to health coverage.

But nurses know there is a solution. It’s time for politicians to stop coddling Wall Street and start caring for Main Street America. National Nurses United is proposing a small tax on Wall Street transactions that would both curb reckless speculation and provide up to 350 billion dollars in funds to heal our ailing economy.

It’s not surprising that security at the rally on Friday May 18 was tight, but here it seemed almost excessive considering that the organizers had obtained the proper permit and kept the event running smoothly and peacefully — it’s one of the only political rallies I’ve been to that started on time and ended early.

Walking north on Dearborn to Daley Plaza, I counted at least 20 law enforcement vehicles on the block between Jackson and Adams, a sleek line of Chicago Police Department and Homeland Security armored cars and a fleet of Ford SUVs that seemed better suited to the parking lot of a little league soccer game than a national leadership conference. At Daley Plaza uniformed cops in riot gear punctuated the crowd.

The Union is calling for what they call a “Robin Hood tax” — a small tax of less than half of one percent on Wall Street financial transactions of over 100 dollars. Revenue from the Robin Hood tax would go to funding for jobs, education and housing. The prospect of taxing the rich drew in attendees representing an array of local and national activist groups, including Occupy Chicago, Food Not Bombs, Seeds of Peace and countless local labor unions. One of these organizations was the Illinois Single Payer Coalition, represented by President of the Board of Directors Sonja Rotenberg.

“We support the nurses, because they would bring funds into communities for healthcare and education,” Rotenberg said. Trained as a social worker, she hoped in particular to see improvements in the Medicare system, “It’s the only way you can deliver healthcare to everyone in the country. Our [current] healthcare is a non-system based on profits.”

When I asked her about specific legislation the Coalition focuses on, she cited Illinois House Bill 311, which would establish a single-payer healthcare system for Illinois. Though Rotenberg seemed hopeful that single-payer healthcare might someday be a reality in the US, Illinois HB 311 is unlikely to be the necessary catalyst to move such a system forward in our state — according to the Illinois General Assembly website, the bill made it out of committee in 2008, but was never held to a general vote.

Still, support for a single-payer system was a concern I heard over and over again in the crowd, and made sense, given the nurses’ argument for a more centralized, accessible healthcare system. “I would go to Pluto for single payer,” said Michelle Cunha, an EMT who came all the way from New Hampshire for the weekend’s protests. Though she provides emergency care, Cunha isn’t paid enough to cover her own healthcare, to say nothing of her student loans or her mortgage.  “My situation is not unique,” she said. “I think that it’s time our CEOs realize they can’t increase the cost of healthcare and decrease our salaries.”

Joan Verret was another rally attendee who’d come a long way. A retired nurse, she now lives in Florida, where she is also ordained in the Episcopal Church. When I asked her how long she has worked in nursing she replied, “I like to joke that I roomed with Florence Nightingale,” then explained that she went to nursing school in 1956 and later took a nursing post with the air force. She is now an active member of the League of Women Voters. “You get encouraged when you hear people’s stories,” she said. “These same stories also show how much work still needs to be done.”

The rally’s final performer was Tom Morello of the left-leaning, neo-thrash-metal group Rage Against the Machine, whose last-minute addition to the rally almost caused the city to shut it down. “I would never do anything to hurt Chicago,” he said in response. “This town is our town. There’s no way I’m not gonna play some screaming solos in the shadow of Picasso.”

While office workers in the Daley Center next door peered down on the crowd, holding out phones and digital cameras, and rally attendees followed instructions to sing along and jump up and down, Morello made good on his promise. He played a mix of his own songs and covers of Bruce Springsteen and Woody Guthrie, who would have been 100 years old today and whose “This Land Is Your Land” Morello declared “a class warfare anthem.”

As the last vibrations from his guitar dissipated through the speakers, the crowd began to disperse. Morello left the crowd with one last piece of advice and perhaps a charge for the rest of the weekend’s protests. “Take it easy,” he said. “But take it.” 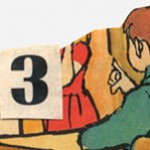 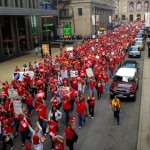