A summary of some of the proposed reasons for last months CTU rally as well as images from the event.

All images by Kimmy Tolbert and Casey Murtaugh

Over five thousand teachers flooded the streets on May 23 in a rally to show support for the Chicago Teachers Union as well as to protest Mayor Rahm Emmanuel’s numerous proposed changes to the Chicago Public School system. The message “YES! To educational justice” was be seen stickered everywhere, even on many of the police officers who calmly patrolled the streets.

The present educational injustices in Chicago’s Public School system are complex and numerous. Emmanuel’s move to privatize education by closing down neighborhood schools and opening up charter schools — despite no evidence for their improved performance — is also a strategic move to weaken the CTU. Teachers at charter schools cannot be part of CTU and therefore be forced to work for lower wages without its backing.

An issue that brought many parents out to the rally is talk of a longer school day in all CPS schools, despite no teacher raise and no extra funding for schools. This move would be detrimental in similar ways as the increasing pressure to achieve high standardized test scores and Emmanuel’s push for a merit-based pay system for teachers. Learning occurs in ways that tests are often unable to measure, and standardized tests leave no room for teacher intuition, flexibility, and responsiveness to the diversity of their students’ needs and learning styles.

Chicago’s Board of Education is not elected by popular vote, but appointed by Emmanuel. Members lack educational backgrounds critical to understanding what happens inside classrooms — Chicago teachers have had enough. In order for change to happen, many believe the CTU must go on strike. In the sea of red on the 23rd, the energy for a strike buzzed in the air, on the posters, and in the voices of those fighting for the children and teachers of Chicago Public Schools. On June 11 the Chicago Tribune reported that more than 90 percent of CTU members have voted to strike. 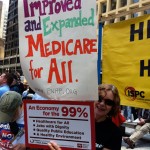 Rage Against the Machine: Nurses’ Union Kicks Off Weekend... 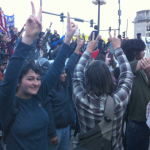