Following the infinite loop of random associations back around to myself and beyond.

Tweet
Following the infinite loop of random
associations back around to myself and beyond “I am an infinite loop” and “I can taste the color purple.”
I picked up a colorful journal of past sensory deprivation tank experiences.
I was about to float inside an enclosed tank with body-temperature water and
800 pounds of salt. There is nothing to smell, nothing to hear, nothing to see, nothing
to taste, and eventually I was supposed to lose my sense of touch as well. “Take off your
shoes!” Before I could enter the SpaceTime Tanks lounge, a gray-haired man with earrings
from cartilage to earlobe stopped me. Calming bhajans, Hindu devotional music, added to
the Eastern decorations hanging on the walls. “Please, come in and make yourself
comfortable. Have some water. I will be right with you.” According to the
SpaceTime Tank’s website, flotation reduces tension and enhances
the consciousness of body and mind. “Many people come
here to achieve spiritual awareness,”
said the gray-haired man,
“but some come for the benefits of the
salt on joints and muscles.” He explained that
I would drift from dream state to waking state
and that the fun would start when I could
no longer tell the difference
between the two.

He explained
that I would drift from
dream state to waking state
and that the fun started when
I could no longer tell the
difference between
the two.
In a private room, I showered
and immersed myself within the silky saltrates.
My perception expanded as the 8' x 4' x 4' tank grew as
big as the ocean. After fussing around a bit to get myself comfortable,
I attempted to calm my mind, which continued to replay a Bosnian pop song.
I became so frustrated – at the edge of tears – because I could not stop the song from
looping in my head. I came to the scary realization that controlling one’s mind is very hard
to do, and that in our distracting, contemporary lifestyle, calmness must be practiced.
For a few minutes I entered a state between dream and reality in which I floated through
space. I moved my body to look around. The water didn’t exist anymore. I saw stars
and nebulae in the distance. I snapped out of it and for the remaining time
played around with the sensation of floating. I moved my hips and
head from side to side, touched my hair from behind my head,
and pushed myself around the tank. I imagine that with
regular floatation sessions the experience
can only get better. 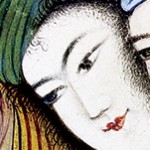 An Arabesque in New York 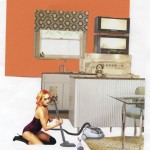