Juan Ángel Chávez Examines the Universality of Adaptation and Survival

“The song talks about an important point: disguising your identity and using that as a form of survival — a mask.” 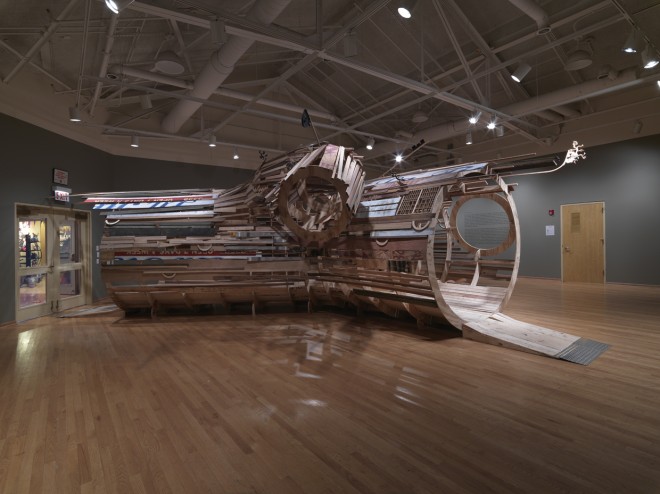 A large and seemingly precarious wooden structure resembling a tunnel sits alone in the middle of the quiet and pristine Rubin & Paula Torres Gallery at the National Museum of Mexican Art. Made of wood and found debris it is, in fact, a sturdy construction large enough for anybody to walk through. Although it appears innocuous, even playful, it is an artist’s reaction to the plight of immigrants crossing the United States border.

The artist is Juan Ángel Chávez, currently a sculpture instructor at SAIC. Originally from La Junta in the Mexican state of Chihuahua, Chávez migrated to Chicago with his parents as a teenager and has been making art ever since. Most recently, he has made several large interactive installations out of wood — like the one at the National Museum of Mexican Art — that beguile viewers to participate. He was also chosen by local art personality and entrepreneur Ed Marszewski as one of the 40 most prominent Chicago artists for DePaul University’s Art Museum inaugural exhibition RE:Chicago, cementing his role as a major player in the Chicago art scene. 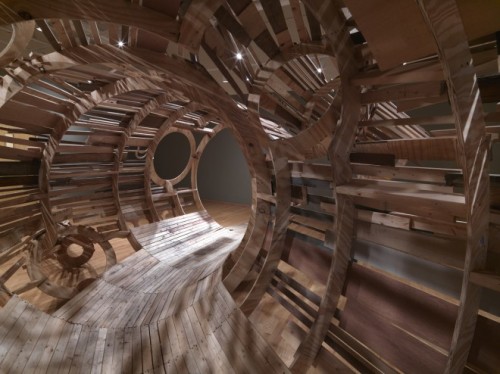 When Chávez first arrived in the city with his parents, they settled in Uptown, where it took him some time to adapt. “It was 1985, I was 13 years old and in Mexico I was being raised to be a cowboy,” he explains, laughing.  “While everybody in my school was into hip hop and break dancing, there I was in tight Wranglers, cowboy boots and a big old belt buckle. I remember that exactly because I got in so many fights! It was tough but in the end it was the best thing my parents could have ever done for me.”

Chávez credits his mother as the one responsible for getting him involved in different youth art organizations in the city. He spent considerable time at the Institute of Puerto Rican Arts and Culture taking art lessons, an experience that also taught him how to navigate the city. “I was used to leaving the house early in the morning and not coming back until it was nighttime. Here in Chicago I had to worry about safety and directions.”

Eventually, Chávez had no problems making his way through the streets of Chicago — soon he would be using them as his canvas. He began by painting murals and mosaics at public libraries and CTA train stations. Then he began pushing the envelope on what was considered illegal street art, he explains. He would construct a wall in vacant spaces by the train tracks and work especially hard at making found material street installations around the city. While some were carefully put together collages of found objects and wood, “Hubar,”  consisted solely of placing plastic eyes on an electric box with its cables branching out on the side of a bridge, creating what looked like an adorable spidery robot.

Currently, Chávez’s work is made mostly of wood. At his studio — or wood shop — in Bridgeport, he works incessantly; he proudly admits he is as ambitious as artists come. By his office space, he keeps small-scale models of all the wood installations he has exhibited and even the ones that did not come through. His most widely known work is “The Speaker Project,” a 2006 wood and found objects chamber meant to resemble a speaker in which participants would walk in and experience performances — the acoustics challenging the usual experience of listening to sound or music. He exhibited it first in 2006 at the Hyde Park Art Center and later traveled to several cities around the country where he rebuilt it. The original was discarded. 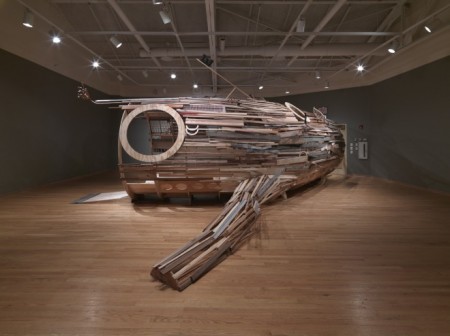 Compared to “The Speaker Project,” “Neptuno” comes from a darker place. The title is taken from a cliché song about an immigrant coming from Mexico to the U.S. by the norteño band Intocable, he explains, but a pharase with the word “Neptuno” (Neptune) caught his attention. It is quoted in the installation’s promotional postcard. “The song talks about an important point: disguising your identity and using that as a form of survival — a mask,” he says. “When you’re crossing the border there’s an attitude you need to present to authorities that ensures them that you’re not from Neptune. The piece is a way to disguise the concept of smuggler tunnel and also make a smuggler tunnel more embraceable, more participatory.”

Cesareo Moreno, curator at the National Museum of Mexican Art is particularly pleased with the installation. It is the first time the NMMA has exhibited a work that requires viewers to participate. “Juan successfully brings together contemporary issues related to Mexicans in the United States,” Moreno says. “As a contemporary artist he’s not making art that necessarily ‘looks’ Mexican but bringing together complex and new ideas through his values and unique aesthetics. His approach to art has challenged our own notion of what we consider art.”

Chávez is not particularly interested in addressing all issues affecting Mexican immigrants in the United States. He shies away from the usual classification of “Latino artist” pegged all too commonly and not too carefully on artists from anywhere south of the border. “Why are we so concerned with establishing these categories to the people who live in the United States?” he asks. “I don’t mind putting my work in the context of me being Mexican or displaying it in a Mexican art museum but my work is not only about that. Although I address certain issues, I make contemporary art that deals with issues of adaptation and survival — I don’t consider them cultural situations but universal experiences.” 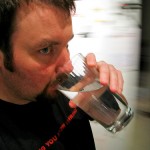 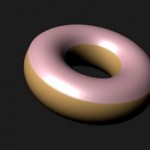 Gif of the Week: Doughnut in Mouth