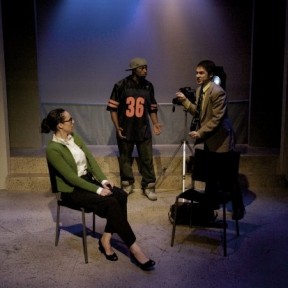 For starters, the tag line for “Sizzle,” now playing at Raven Theatre’s West Stage, is enough to intrigue those looking for an interesting night: “Sizzle: A Global Warming Comedy.”  And if that isn’t enough, in a bizarre twist on the standard stage/screen relationship, it’s a play adapted from a documentary about making a documentary. Challenge accepted.

Those who don’t realize the sheer strangeness of the concept (both as a comedy about something you learn in high school science class and as a paradoxically staged version of cinema vérité) will still come to appreciate the light-hearted slapstick and genuinely educational angle the work takes towards a very big, very divisive topic.

Scientist and filmmaker Randy Olson, as played by Andrew Nowak, stumbles onto the stage starting with the first scene, armed with a briefcase, the latest statistics and an air of sheer confusion.  From the get-go, the acting is bright and expressive, instantly setting the mood for the rest of the play.  Of the four leads, each plays their role with a resolve that provides the story with the a good range of personalities to function.  Korri Givens plays Tyra, a level-headed PA extraordinaire who constantly finishes sentences and acts as the fulcrum between Olson and his diametric opposites, the flamboyantly faddish producer Mitch and the streetwise and unreserved cameraman Antoine.  The former, played by Michael Reyes, provides the crowd-pleasing theatrics that only an insane Hollywood producer can, while Antoine, played by Jovan King, is not afraid to speak up and play the outspoken everyman to every stuffy scientist that enters the picture.

To its credit, the play never gets bogged down in those science-y statistics — it slips them in slyly as failures to communicate with the Hollywood crowd, inciting eye-rolls and heavy sighs from the showbiz crowd, and using the flatness of science jargon towards the development of the plot.  Olson’s delivery of the figures is adequately nerdy, and his mannerisms during the most “exciting” of the pie charts and graphs are adequately spazzy, but the biggest flaw of the acting is present in that untethered dorkiness. 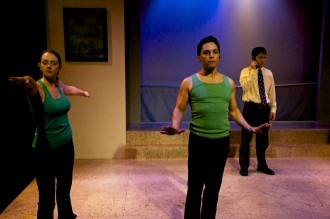 Still, those spastic fits highlight one of the best parts of the production — the transitions.  Any other play would have suffered from the abundance of scene changes, but “Sizzle” manages to ingeniously utilize Nowak’s physical acting ability to draw attention away from the shifting of furniture and towards Olson’s bumbling persona and the endless shuffle of cross-country travel.  The use of lighting is also supremely skillful; in such a small space, with a limited amount of props, the subtle changes in color and tone of the lights help to create entirely new spaces, often several times within the same scene.  The shifts in lighting and the set changes never impedes the story, and even helps to move its development forward in a profoundly inconspicuous way.

“Sizzle,” which is the third production of the emerging New Suit Theatre Company, shows promise — both in its ability to engage with and educate the audience.  If it weren’t for a few, rather loudly yelled profanities, it would make a fantastic play for all ages, but even as is, the work put into it has its roots in sincere (and sincerely unorthodox) sentiments.

One Response to Greenhouse Gases: The New Pie-in-the-Face