“Touch and Go” examines Yoshida’s evolution as an artist, the influence of his teachers and contemporaries, and his own role as a mentor. 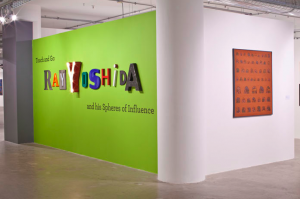 Installation view of “Touch and Go: Ray Yoshida and his Spheres of Influence.” Image courtesy of Sullivan Galleries.

Just to the left of the entrance of SAIC’s Sullivan Galleries, a vitrine holds three pieces of paper, scribbled with long lists of puns playing on the word Ray – including “up, up and a-Ray,” “singing in the Ray-n,” and “Ray-diation.” Complied by Christina Ramburg, the list includes suggestions written in different handwriting, offering a glimpse into a collaborative exercise full of possibility. This piece sets the tone for “Touch and Go: Ray Yoshida and his Spheres of Influence,” an expansive retrospective featuring SAIC alum and instructor Ray Yoshida (1930-2009, BFA 1953).

Curated by John Corbett and Jim Dempsey (directors of the Corbett vs. Dempsey gallery), the show examines Yoshida’s evolution as an artist, while also taking into account the influence of his teachers and contemporaries, as well as his own role as mentor to the students he taught during his decades-long tenure at SAIC. To that effect, works by Yoshida’s teachers Paul Wieghardt and Kathleen Blackshear, and his numerous students, including Christina Ramburg, Barbara Rossi, Art Green, Ed Flood, and Roger Brown, are also shown.

The result is a collection of work that provides insight into the work of a prolific artist with wide-ranging interests and a far-reaching influence, and that also presents a fascinating examination of the art scene in Chicago during the 1960’s and 70’s, when the Hairy Who and Imagists were coming into their own. Corbett and Dempsey make these connections for us, and we can trace the evolution of one idea or motif between the different artists. 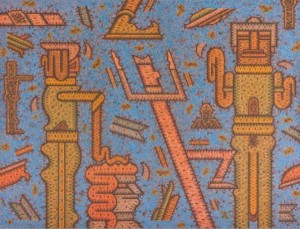 If there is one weakness to the show, it is that at times, these connections seem static or arbitrary. In the parts of the show that cover the latter years of Yoshida’s life, the work of his students seems less relevant, with only Chris Ware’s comic piece or Rebecca Shore’s painting “24” suggesting a strong connection to his practice.

There are many outstanding pieces of Yoshida’s work on display, including an early untitled oil painting from 1960 that earned him a prize in the 63rd Annual Chicago and Vicinity show. Filled with expressive abstract lines and shapes, rendered in loose brushstrokes and glowing color, it acts as a point of comparison to the hard-edged aesthetic that Yoshida developed later. Also compelling are the early and late iterations of the “Comic Specimens” series that feature cryptic arrangements of cropped images from comic books.

However, the most fascinating works in the show are the ones that embody its spirit – the pieces where we see not just a connection, but the direct interaction between student and teacher. In this vein is the piece “Tripple Twins” from 1974, a collaboration between Yoshida, Barbara Rossi, and Christina Ramberg, where each artist elaborated on the work of the others in sequence. Another piece is Art Green’s “Dollar Bill” print from 1962-63, made in a SAIC printmaking class under Yoshida and co-signed by him.

Yoshida’s influence will continue to be felt through not only his own body of work, but through the work of those artists who had the opportunity to study with him. It is a powerful reminder of the great responsibility of those who take the time to share what they know with those around them. 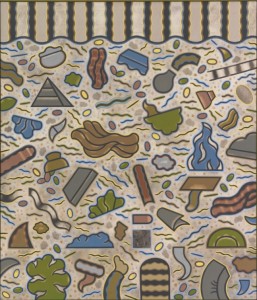 One Response to Ray Yoshida at Sullivan Galleries