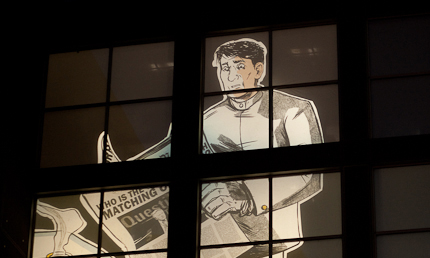 Comic books and space travel both occupy a special place in the collective American unconscious. Redmoon Theater’s “Spectacle 2010: The Astronaut’s Birthday,” performing in a special collaboration with the Museum of Contemporary Art, offers an outer-galactic multimedia experience with a comic book sensibility.

The spectacle — which is what Frank Maugeri, Redmoon artistic director and the director of “The Astronaut’s Birthday,” calls it — starts with a mysterious orb crashing into Earth. The orb comes with a message: “send one.” The narrator explains that the orb is looking for whichever earthling has the matching orb. Enter Al, an elevator operator who lives with wife and daughter Lindy. Turns out, Al has the matching orb in the form of a marble he’s had since childhood. Presto! Al is launched into space — but not before Lindy, who has a birthday coming up, stows away.

The spectacle comes from the way materials are used to tell the story, most specifically in the way that comic book style drawings on acetate paper are projected onto the front edifice of the Museum of Contemporary Art’s eighteen windows. Redmoon uses the structure of the museum and the same overhead projectors most of us grew up with in school to project their shadow puppets. The projectors sit on scaffolding to create the effect of the comic book being 80 feet tall and 160 feet across.

Since the show is performed outside, and features an epic sci-fi score by Jeffrey Allen Thomas, it’s easy to get lost in Al and Lindy’s plight. As though at any moment, Chicago could be visited by its own extraterrestrial message. Actor Tony Fitzpatrick, who is also on the board of Redmoon, plays a narrator with a nasty habit of telling the audience what they are seeing or are about to see. Fitzpatrick’s narration kicks in at my favorite part of the show, when our story’s mysterious villain tempts Al three times and we learn his true identity and purpose. Here, Fitzpatrick, the music, and the hands of the performers drifting over the projectors simply click.

The corner of Chicago and Seneca created an interesting ambiance by providing real-life sirens during the show’s climactic battle. Unfortunately, the timing was just a touch off and the show itself did not pause to let the ambulance pass. This made it impossible to hear the narration and clashed with the show’s flow, but this is forgivable when one considers the sheer amount of hours that must go into a Redmoon production.

“The Astronaut’s Birthday” is kid friendly and knows it. Though it lacks the emotional depth of a Pixar movie, Lindy is a character you want to stand up and cheer for. Especially when she fights giant robots while piloting a giant robot herself (really!), and teaches her not-so-perfect dad “what really matters.” But really the story and spectacle are designed for children of all ages. In that respect: mission accomplished, Redmoon! 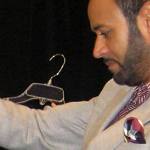 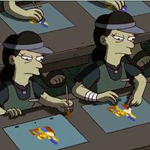