Chicago has a long history of tension between the broader arts community and city officials — both before and after Mayor Daley’s establishment of The Graffiti Blasters in 1993. Two recent events have highlighted this relationship: the “bombing” of the east wall of the Art Institute of Chicago Modern Wing on February 23 and the death of Jason “SOLE” Kitchekeg while being pursued by Chicago police on March 9. 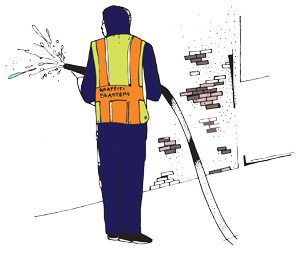 Chicago has a long history of tension between the broader arts community and city officials — both before and after Mayor Daley’s establishment of The Graffiti Blasters in 1993. Two recent events have highlighted this relationship: the “bombing” of the east wall of the Art Institute of Chicago Modern Wing on February 23 and the death of Jason “SOLE” Kitchekeg while being pursued by Chicago police on March 9.

For this month’s F News Question, we bring you thoughts on graffiti — theoretical and philosophical stances, personal experiences and responses to recent events — from faculty, students and alumni with, well… experience.

Email editors@fnewsmagazine.com with your opinions or post comments directly at the bottom of this page

By Ray Noland of creativerescue.org
BFA 1995

While I admire them for their gusto, I wasn’t too impressed with the pieces on the wall of the Modern Wing. I mean I know they had to do them quick and all but that was introductory. Check out STATIK, eL MAC or CHOR Boogie.

Is this not all part of the learning process of being an artist though? Originally kids go out with the basic intent to FUCK SHIT UP and graduate into artists that really MAKE YOU QUESTION the lines between street art and corporate advertising, or graffiti and fine art. If someone had gotten up with something more thoughtful and noteworthy, I may have a different opinion.

Folks have been writing and commenting on objects and utilizing the public space for creative, social and political purposes for centuries — and will continue. It’s a conversation with the many.

Falling Up: A Call to Arms (RIP Sole UAC)

the factory he was painting on
used to manufacture paint. tomb
stone for the industrial age near
the stevenson express way, along
the south branch of the Chicago river.

Pilsen, Little Village, used to be
Back of the Yards, giant butcher
in the center of the country.

cops gave chase in an abandoned building.
whose interests were they serving. the city
didn’t protect the bodies working
while the factory smoked.

the building is a heap of grey rot.

graffiti writers are superheroes
who astound and scale the possible,
who defy gravity, who commemorate
and communicate in secret codes.

graffiti writers are the recorders
of a city rotting. painters of walls,
resisters of death and dying industry.

when Sole jumped off the roof
of the empty building, he thought
he could swim, maybe thought
the river would break his fall
and it did
break him
maybe.
or maybe
the ghosts of the river
held him there. great leviathans
disporting themselves in the depths*
of bubbly creek. there is
no oxygen in the water.
bloodworms feast on sunken
organs buried in the riverbed,
corpses slaughtered in the stockyard
decomposing for decades, entrails
and industry, the hands of workers
pushed out of job and home.

Sole choose to be free
Under A Crown, United Artists,
Crew of the working. he was
twenty-six, a year into marriage,
recently laid off. a city worker
remembering the left out, the margins
and maimed, the garnished wages
and real income of regular people,
in this city on a lake, plummeting
like stone off a roof top, a body
from the heavens, Sole falling
in the Chicago River
where workers and remnants
of slaughter disturb the water
bubble up, and sometimes
catch fire and burn. 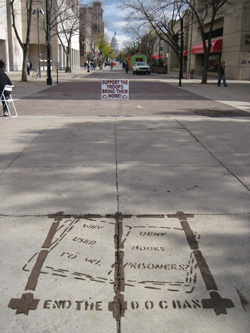 The distinction I see (in my limited knowledge) is that commissioned public art is probably brought into existence by some government planning agency or arts council to “enhance” the beauty of the city; an artist gets some money and puts a piece of themselves in a public space for everyone to walk around and contemplate; and, the graffiti artist is someone who goes outside of those resources to find a space that they can confront the world in quite a different way.

Graffiti is also a tool for people to use to subvert commercial advertisement and social ideas. I appreciate the graffiti artists that paint a picture as to the usual name or gang tags. I think if the laws weren’t so harsh then we would see more graffiti art with artistic value.

Unfortunately, today you can rarely find an intricate piece on a train ride. In my experience, the best pieces are now found tucked away in drainage ditches and the lost corners of cities. Artists like Banksy are bringing message-based graffiti to the forefront and it seems like a significant change in American society that will benefit the spirit of a people if used properly.

I think mud graffiti is an excellent way to put out a non-destructive message considering it’s temporary nature. There is debate about the cost of damage, but never-the-less it is a means of expression without significant monetary damage.

Look online for the IVAW mud stenciling at a Madison recruiting building and you can also check out a great video when you search for “retooling dissent” on Google video to see other graffiti options as a protest tools.

I held a workshop at my apartment recently, and we discussed the medium of spray cans and how it is technically illegal to purchase the cans in the city of Chicago — does its inaccessibility make it more attractive? We worked on a sanctioned wall in front of my apartment. Members of the student group National Art Education Association (NAEA) created a fake “crew” named No-Pales (No-Police AND nopales being Spanish for cactus … we were in Pilsen at the time).

The purpose for this Skill Share, as the NAEA workshops are called, was both to discuss the technique (we had a 14-year-old neighbor of mine help lead the session) but also to gain a greater awareness about the social implication around graffiti, with regard to tagging signs and street corners. The group consisted of art educators, mostly art teachers in-training; it was an unfamiliar medium for most of us.

We followed this workshop with a visit from a Chicago Policewoman who gave a lecture on gang symbols. This was particularly important for us, as we will be working in schools and need to know if students are using gang symbols in their artwork.

With its obvious ties to gang demarcation, the art form of graffiti has gotten a bad rap over the years. Yet, isn’t it interesting that flocks of people come to Venice Beach in California and even Pilsen to see the graffiti art on the street?

We cherish the work though our gawks and approving comments, as we are often surprised and impressed by its presence and size; but in theory it still continues to come under scrutiny as a valid or valued form of art.

“Dada philosophy is the sickest, most paralyzing and most destructive thing that has ever originated from the brain of man.”
—American Art News, 1918

So somebody went and done drew a mustache on the Mona Lisa.

Which is to say, somebody took aerosol to staple,
mocked how we consume our culture.
I imagine them smiling when they did it.

The tags have long since blasted away.
It’s business as usual at the Art Institute of Chicago:
Euro-centrism and expensive cheese
shoved down throats that reflux
the same tired conversations.

Whatever it is has proven gatekeepers ignorant
by infiltrating the institutional art machine.

Terms like “hip-hop” woo corporate philanthropists,
“urban” a call to arms for chic intelligentsia the world over.

I am a rapper
introduced to hip-hop culture
through commodity.

My early engagements with rap music
were mediated by radio, cable television,
the monitored confines of the mall record chain.

I experienced the renegade of rap
after it had been scrubbed, bleeped.
I felt the furious wild style from a safe distance,
then copied the styles I heard.

I didn’t cipher in the lunch room,
my homeboy beating on the table.
I didn’t cut my teeth in MC battles.
I didn’t even meet my first DJ until I was 19.

I, like many artists, have benefited from those
who risked their bodies
crossing invented boundaries.

Those who risk their bodies
to steal, hustle, con,
bend the bars to prove
another paradigm is possible.

We pick and tear,
wear their skin, swallow their tongues
to better define ourselves.

We press their remains on t-shirts
long after they’ve been crushed
by narrow, elitist agendas.

It’s all make-believe.
Institutes are machinations
like constructs of race, wealth, success.
A shared hallucination.

All that is real and undeniable
is this animal need to survive,
the human desire to exist
after the flesh dissolves.

There will always be those
who stand outside our hallowed halls,
those who haven’t a taste for stinky cheese. 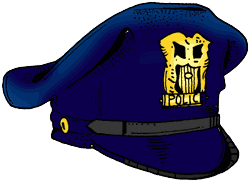 And if they are not greeted,
they will introduce themselves.
It will not be creased nor presentable.

It will test the patience
of the liberal and learned.
We will have to stop for a moment,
mute ourselves,
and think about what it means. 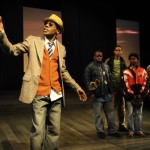 "The Lost Boys of Sudan" Victory Gardens Theater From... 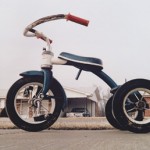