Return of the Real

This spring, shows at Chicago galleries have been like cries for help, echoing an anxiety that is endemic to this contemporary world of recessions, wars, and catastrophic natural disasters.

This spring, shows at Chicago galleries have been like cries for help, echoing an anxiety that is endemic to this contemporary world of recessions, wars, and catastrophic natural disasters. While shows like “I’m OK You’re OK” at Concertina, “Notes to Nonself” at the Hyde Park Art Center and “The Gesture Guild” at threewalls proposed, played with and critiqued “therapeutic” ways of handling that anxiety, two new exhibitions at the Museum of Contemporary Photography explore its root causes.

When artists Beate Geissler and Oliver Sann moved from Germany to Chicago in 2008, their search for a place to live took them on a desolate tour through Chicago’s neglected living spaces. “the real estate,” up now at the Museum of Contemporary Photography, reveals 60 color photographs that document the interior spaces of foreclosed homes visited by the artists in early 2008 and 2009.

The homes Geissler and Sann photograph aren’t particularly run-down or dilapidated. They still bear witness to the faint traces of their former inhabitants. In some images, the walls are painted bold, eccentric colors, or are riddled with wound-like nail holes, like ghostly reminders of the personal objects that used to identify that space as owned and lived in.

Just as often, the reminders of the former occupants are more concrete: the photographs capture the items that were left behind, some as inconsequential as a mattress, some as meaningful as family photos.

In one particularly eerie image, there is a dirty mattress on the ground. A rubber Halloween monster mask lies on the edge of the mattress, as if this home had been ransacked by some masked bandit. And now, like the rest of the home, without a human occupant the mask is hollow and lifeless.

Knowing that the melancholic pictures are documenting the results of foreclosure adds a tragic sense of loss to these spaces — spaces that once served as shelters and sanctuaries, but which became burdens that betrayed their owners, or symbols of failure.

Geissler and Sann’s photos publicize the aftermath of devastating events that literally occur behind closed doors. By adding “the” before “real estate” in the exhibition title, the artists also question the very appearance of reality itself. Curator Karen Irvine writes that because the huge number of foreclosures was the result of fraud and deception, showcasing the “realness” of the aftermath of that fraud adds an ironic layer to the images.

The housing market might have been built on a fictitious house of cards, but Geissler and Sann’s photographs eloquently reveal the very real nature of the devastation experienced by millions when that house of cards fell. 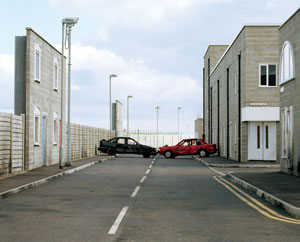 In “Incident Control,” photographer Sarah Pickering also plays with our sense of what is real. In her photos, Pickering documents what appear to be actual events, surprising the viewer with the revelation that in fact, all of the situations were staged. The exhibition is made up of four collections of photos that all document staged scenes meant for training purposes.

“Fire Scene,” for instance, captures film fires set by the British Fire Service College. Elaborate indoor set designs are constructed to convey a specific chain of events: the first sparks of the fire (due to a malfunctioning space heater, or some teenagers huffing glue), followed by the arrival of the forensic scientists, who enter the scene after the fire has been extinguished and determine its origins.

Pickering captures the fires just as they start, so the rooms are not yet heavily damaged. The sets are constructed with details meant to convey clues as to how the incident occurred. In the room in which imaginary teenagers huff glue, for instance, there are action figures on the floor and clothes thrown sloppily over a desk chair, all slightly obscured by blazing flames. In another scene, a lamp teeters atop a television on a dresser littered with beer cans. The carpet even had smudged footprints on it. Each narrative is so highly calculated, it is hard to believe the images are not of authentic disasters. 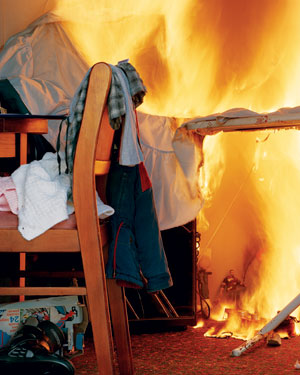 “Public Order,” in the back room on the first floor, is the most intriguing collection of Pickering’s photos. Instead of the one home of “Fire Scene,” however, “Public Order” depicts an entire city.

The photos document the small-scale cities (including bars with signs, graffiti, nightclubs and even a train station) that were constructed to train the British Police Service in preventing terrorism, riots and protests.

The buildings all have cinder block façades that look strikingly real, but oddly fake at the same time. There is no evidence of human life, as if the entire town had been abandoned. Curator Karen Irvine writes that minute details like the names written on bars help to “humanize the trauma, to make sense of it [and] might promote more empathy on the part of the police and forensic trainees, or it might distance them from victims perceived as existing in the realm of the other.”

Either way, the amount of effort that goes into creating a perceived sense of authenticity in these situations is impressive, even as it lends a sense of futility.

Taken as a whole, “Incident Control” is like a conceptual reversal of “the real estate”: instead of documenting the real results of deceptive, legal fictions, Pickering presents staged, artful fictions as concrete reality. Taken together, both exhibitions reveal volumes about contemporary anxieties regarding real, perceived, and imagined traumas. 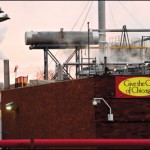 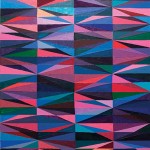