Interview with A Blue Man

“Technically,” Matt Ramsey says, “all Blue Men start in New York. The training facilities are there. Depending on their casting needs, they will perform in NY for a couple of weeks to a couple of months.” 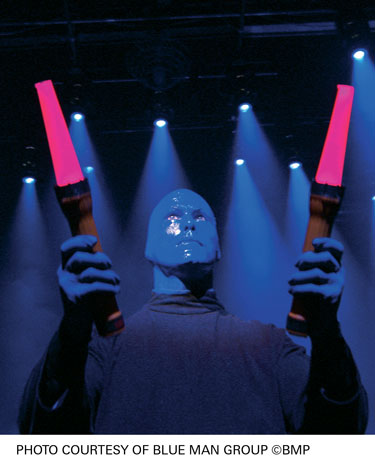 “Technically,” Matt Ramsey says, “all Blue Men start in New York. The training facilities are there. Depending on their casting needs, they will perform in NY for a couple of weeks to a couple of months.”
Ten years ago, Ramsey began working with the Blue Man Group as a trainer. He has performed with the troupe “in Paris, Argentina, on Talk Shows, the Jay Leno show. As for the sit down shows, I’ve performed in New York, Chicago, and Berlin.”
“[I’ve had] a lot of unique opportunities with this job.”
Though he studied vocal music and Shakespeare, he would go on to work with the non-speaking Blue Man troupe right after grad school. Not speaking, Ramsey learned, can mean universal appeal. “The lack of verbal communication suits [the show] for international audiences.”
There is part of the show where a woman from the audience is brought on stage to eat Twinkies with the Blue Men. “We call that section ‘The Feast’.”
Ramsey recalled one incident where the group discovered after sharing the feast with a female audience member, “that she was deaf. She can enjoy us, and we can enjoy her without a language barrier.”
Ramsey went on to speak about how the show is received internationally.“The biggest difference I noticed was the cultural set of rules at a…public performance, and how you show satisfaction and dissatisfaction. In Berlin, it was very polite. Instead of out-loud laughter, more commonly, they would respond with polite applause. We had to adjust to how to perform to that on the fly.”
According to Ramsey, the Blue Man Group is largely about “Participating in art, celebrating it, but mocking it…the ego, and snobbery of it.”
There is the segment where the troupe (referencing Yves Klein) hoist a member of the audience upside down backstage, paint him, and then thrust him against a canvas. All of this action is captured in real-time on a video camera. The Blue Men produce “highly valuable” artwork by regurgitating marshmallows onto a canvas. The Blue Man occupies some peculiar space between transgressive performance artist and savvy populist. “It started as an underground movement in the East Village,” Ramsey said. “It won an Obie [the Off-Broadway Theater Award] and they had to create a category for it. It came from the underbelly of the theatre world of New York. Now, of course, that’s changed. We’ve done rock tours and Dell commercials.”
Even with mainstream success, Ramsey believes the Blue Men have “done a good job of maintaining the core value of what they did: connecting with people in a way that hasn’t been done before.”
The aspect of the character that Ramsey has loved the most has been “embracing the element of the Blue Men which is ego-less, which is not trying to be the best, but innocent. The Blue Man at it’s best is equal parts heroic and innocent, with a healthy dose of trickster.”
Ramsey performs six to nine shows a week in Chicago. Even with a set structure, spontaneity is unavoidable.“The show has a set plan, a series of skits that is the same,” Ramsey said. “There’s no fourth wall, so naturally things will change. It can change dramatically night to night. The Blue Man seeks to connect with the audience. The audience is a vital part of the show succeeds each night. We come out and we look people in the eye. There’s a certain amount of discomfort with that. It’s not our goal to make people uncomfortable. Our goal is to collectively create the experience which links us as a community.”