Strains of mournful guitar, lamenting wails and soulful saxophone echoed through the halls of the MCA on a recent Tuesday night as local artist Theaster Gates and the Black Monks of Mississippi performed to a packed house. The performance was in conjunction with Temple Exercises, an installation on view from January 6-February 1. One of the most enjoyable installations at the MCA in quite some time, this serenely ascetic space manages to address a plethora of complex, abstract issues. A meditation on the ritualistic “churchness” that Gates believes is an inherent part of both black and Eastern cultural traditions, Temple Exercises refers both to African American church services and Buddhist temples, acting as a deft melding of artistic, spiritual and musical forms. Miraculously, the installation accomplishes this without drifting into the uncomfortable realm of pretension, pedantry or self-righteousness.

While Gates claims inspiration from very specific and variegated sources, the space that is Temple Exercises is entirely his own. A wood-paneled room partially divided by a wooden screen contains a television set upon which the visitor can watch a Gates performance; a shoeshine stand (entitled Exercise #2: Shine Station) where the visitor is invited to rub wax onto a wooden pedestal and buff it off; and musical instruments hanging on the wall. Black signs that are part glyph, part graffiti are scrawled on some of the mismatched panels, which create a warm environment evocative of the dim amber light of churches, temples and other places of worship. The installation acts as a little haven for quiet, rest and introspection in the midst of the chaos that can be downtown Chicago.

During Gates’ latest performance, an eager audience spilled out of the room, bleeding onto the staircases in an attempt to catch a glimpse of the action. The straining crowds (and accompanying noise) may have distracted from the more introspective, meditative ambience that Gates was attempting to create, but the stirring musical performance was an eminently successful exercise in building intimate connections between performers and audience members. While the Black Monks and performed that meld of African American spirituals and Buddhist chants that is their trademark, Theaster masterfully engaged the audience, inviting them to hum and chant along with the performers. While only a few live performances remain before the exhibition closes, however, a visit to Temple Exercises at any time will be well rewarded.

See the MCA website for information about upcoming events associated with Temple Exercises. 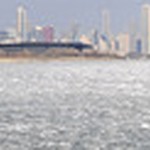 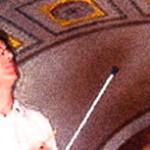