Boys of Summer: A Review

As demonstrated in Monique Meloche Gallery’s new show, Boys of Summer, being a man today does not necessarily mean a jock or an suit, but connotes a much more flexible array of options.

In many ways, Monique Meloche Gallery’s Boys of Summer is just like any of the group exhibitions that fill the slow summer time slot at typical galleries. These shows tend to be eclectic and colorful, taking the sun and fun of summer to heart by exhibiting more humorous works that showcase the gallery’s core artists, as well as some new and borrowed talent.

But Boys of Summer – perhaps as a result of its eclecticism – actually hits on some important notions about what it means to be a man today. Masculinity, it seems, now allows for the retention of a boyhood demeanor. From stereotypes to icons, these men symbolize hope, desire and otherness through the parts they play, the airs they put on, or the costumes they don. No longer the debonair gentlemen in waiting or the cool and callous 007, these representations of the contemporary man elucidate how our definition of not only what is acceptable, but what is respectable, has expanded exponentially.

Zane Lewis’s multicolored cut-out of Barack Obama’s smiling face symbolically greets visitors from its position directly across from the gallery’s entrance with his now ubiquitous message of promised change. As part of his new series entitled Apostles, the potency of Lewis’s and Obama’s messages seem all too clear and poignant. Playing off the indexical power of the Warhol Marilyn silkscreens or the now infamous Che Guevara stencil, Lewis exploits the strength of meaning that can be conveyed by just the iconic representation of a face. It reminds us of what we already know: that it is the new form that this face has taken that is all the more striking.

James Gobel’s bright felt and yarn paintings of handlebar mustached “bears” in black heavy metal t-shirts, blindingly colored flannel button-downs and suspenders majestically pose with candles, their large hands on railings and brilliant blue eyes staring up and off into the distance. These sensitive images balance the chasm between decorum and camp in their compromise of traditional aristocratic portraiture with the media stereotyped pop image of the gay male. Gobel uses craft and sewing to bring home the point that the effeminate associations no longer carry the disparaging potential that they once possessed.

Flanked by Nick Cave’s self portraits wearing his studded, beaded and feathered face masks from his remarkable full body outfits; Jesper Just’s video of a middle-aged man dancing a choreographed number that imitates ballet or ice-skating in a public square while a young man who watches breaks down in tears from what he perceives to be the unbelievable beauty of the act; and Ebony G. Patterson’s paintings of notorious Jamaican criminals that comment on definitions of beauty and race through their watery and colorful depictions of faces, the familiar but unconventional representations take on a severity/seriousness despite their gaiety.

It is this idea of play, so intrinsic to the notion of boyhood, that characterizes these men. Their ability and willingness to put their vulnerability on display, to experiment with their images, and to almost literally engage in games of dress-up and make-believe, exposes that through society’s continuous consumption of diverse (and even perverse) images, a kind of nobility and honor has been bestowed upon a greater range of types. In other words, to be a man today does not mean a jock or an suit, but connotes a much more flexible array of options. 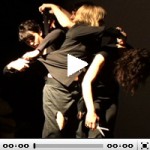 One of Three – video 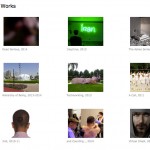