There is no doubt that environmental responsibility is on the minds of School of the Art Institute of Chicago students.

There is no doubt that environmental responsibility is on the minds of School of the Art Institute of Chicago students. In many cases, what was once considered avant-garde and awe-inspiring by artworld aficionados is now examined in classrooms for its wasteful effects by upand-coming artists. For example, land art of the 1960s and 1970s holds less appeal to current art students, who question the methods used in its upkeep. Christo and Jeanne-Claude’s large-scale flag works and drapings of monuments and natural wonders are criticized by young and emerging artists for their abundant use of resources and the potential destruction of the land swaddled underneath the fabric. Likewise, the preponderance of gigantic, resource-consuming artworks in the 1990s and early 2000s, such as the puppies of Jeff Koons, or some of the Unilever Commissions at Tate Modern’s Turbine Hall in London, are now sometimes regarded skeptically for their irresponsible consumption of natural and artificial materials.

Certainly, the topic is also foremost on the minds of those who work in the arts. Alisa Regas, associate director of Pomegranate Arts in New York, recently mused to a class at the School about the environmental impact of her organization’s national tours. She asked what will happen when people stop going to see Philip Glass or Laurie Anderson in protest about the cars and planes that the artists took to get to the venues? Can the effect of a carbon footprint ever outweigh the impact of a high-quality artistic experience?

We here at F Newsmagazine shudder at having to measure the latter. Having to weigh something as intangible as an artistic experience can only get into a numbers game that foes of the arts typically manipulate to undercut arts funding. Nonetheless, questions such as these must be asked, especially when curators and artists exhibit works that ostensibly raise awareness in support of green causes. Sure, it is great to explore these issues through art. But all that awareness-raising is undermined when the exhibition ends up in a trash heap, and piles of promotional leaflets somehow skip the recycling process and end up in landfill.

Visual artists, for all the allegedly anarchic “freedom” at their fingertips, often benefit from the challenge of placing certain restrictions on their art, and seeing what they can do within those bounds. How about attempting to use environmental ethics as a productive restriction: think of your art (or of your curatorial projects) with reference to the concepts of inter-generational equity and the precautionary principle. What do we mean by this? Try asking the question: do my actions in my art-making contribute to environmental problems, or are they sustainable enough to mean that future generations could have the same quality of experience in daily life I am able to experience now? Likewise, if you are unsure about whether creating that giant balloon sculpture will clog drains and waterways in years to come, apply the precautionary principle to your practice, and find something recyclable and already in consumer circulation to make your statement.

Those who are currently at the helm of the art world need to do more than question, and this does not appear to be happening with the urgency needed. Even Lucy Lippard, known for decades as a perspicacious art critic and historian, needs help in calling this issue to task. In her lecture, “Weather Report: Art and Climate Change” at Columbia College last month, she listed numerous artists who dealt with environmental issues in their work. Lippard also said that until recently, environmentalism was considered “soft politics” by the left, in favor of concentrating on social issues. Of course, now that impending and drastic climate change can be linked quite easily to social issues (water shortages, anyone?), this view has begun to change.

However, when asked what measures for the environment Lippard took in a recent exhibition she curated at the Boulder Museum of Contemporary Art, she practically dodged the question. According to Lippard, it was not that she didn’t have an answer—it was just that she had to cut that part of her presentation so it would not run too long.

The state of urgency in the environment means we need to give time and attention to vanguards such as Lippard—and anyone else who has thoughts on the state of art—making, exhibiting and waste. Our classmates have thoughts on this—we’ve heard them pipe up about it in class. It looks like they’ll be the ones to insist on change. We have a long way to go until most exhibition remnants find a life outside of landfills. 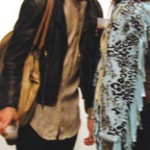 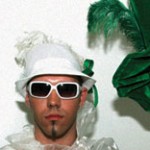