This ambitious survey of photographic art in Central Europe between the world wars organizes more than 160 artworks into eight thematic sections, guiding the viewer through a tumultuous era.

The exhibition is shaped to mark the creation and the demise of not only the modern avant-gardes, but also of the very concept of Central Europe itself. Foto: Modernity in Central Europe, 1918-1945 at the Milwaukee Art Museum captures the very essence of this ambitious but failed project.

From the ashes of the German, Russian and Austro-Hungarian empires, Central Europe burst out to construct its identity from the new, modern and up-to-par. Central Europe was optimistic (at least at first), brash, and lacked self- consciousness, particularly regarding Western Europe.

The 1920 self-portrait of John Heartfield, exhibited during the First International Dada Fair, depicts—literally—a dramatic howl of defiance against the established but bankrupt political and social order. Heartfield’s clenched fists seem to reach toward the viewer to shake her up into new consciousness. The two opening sections of the Foto exhibition reveal the emergence of new attitudes toward art-making through radical photographic practices and photomontage with an emphasis on images that are created and constructed rather than simply photographs as documentation.

These practices interestingly parallel the struggle to build a new identity from the trenches of World War I in the rapidly changing political landscape. Such radical formal approaches reflect equally radical politics, as demonstrated by Heartfield’s unsettling, anti- militaristic photomontage, Fathers and Sons, or El Lissitzky’s nearly 20-foot-long accordion-fold book, The Task of the Press is the Education of the Masses.

The following groupings of works in Foto point out other aspects of identity creation. The new attitude to gender is reflected in New Women—New Men, and The Spread of Surrealism examines the precedence the unconscious took.

Finally, Land Without a Name brings to light the return of a focus on ethnicity, in the documentary photographic movements, which extolled hard labor and the natural beauty of the rural landscape. Given history’s lessons, the latter carries disturbing implications for the future. From there it is only a short step to Hans Bellmer’s Machine Gun(neress) in a State of Grace and Marianne Brandt’s Untitled photomontage in which, presciently (Brandt created the piece in 1930), civilization goes up in smoke. Albeit collaged out of the elements depicting an American metropolis, the piece seems to be a sad premonition of her own nation’s fate.

The exhibition closes with a solitary photograph, an indicator of change. It is a souvenir from the series Spring in Poland, 1947, by the Czech photojournalist, Jindrich Marco. The image depicts two soldiers of the liberating army having their photo taken amongst the rubble of an unnamed town.

Yet, what separates them from the war-ravaged reality is a painted backdrop, which hides the devastation behind. Their new world is not of the ruin, but of the painted, hopeful green pastures of a communist utopia. This is where Central Europe ends and its members split into two opposing camps: the Western and the Eastern Europe of the Cold War era.

It's All About the Building 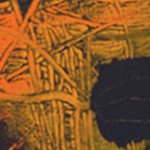