Jasper Johns tries to convince us why Gray matters at the Art Institute.

Review: Jasper Johns tries to convince us why Gray matters at the Art Institute

Curiously enough, the Art Institute of Chicago’s Jasper Johns: Gray exhibition opens with False Start, 1959, a piece that very nearly explodes with primary-colored paint and dislocated words naming colors that refuse to correspond to their respective shades on canvas. When put into context beside Jubilee (also 1959), however, a similarly abstract painting in tonal grays with color-naming text, a dialogue immediately opens up between color and its lack. What changes when color disappears? Where do our emotional associations with color reside? Taking a monochromatic curatorial approach to an artist’s oeuvre as large and varied as that of Johns may strike some as odd. A gray-themed exhibition during a Chicago winter? Cynics may be surprised, however, at just how well the theme of gray, both its color and associated materials, creates a versatile framework for a near-comprehensive look at Johns’s work.

By exhibiting a variety of pieces in only one color, focus is directed toward materials, as a monochromatic display offers the ability to compare different media in a uniform and accessible way. Jasper Johns, of course, placed great importance upon the painting as object, blurring the distinction between canvas as painting and canvas as canvas. The objects that he is most famous for depicting are those that cannot be represented as anything other than themselves—maps, targets, and numbers—regardless of media. These motifs are all showcased in the exhibition, in multiple forms. Johns’ early encaustics and sculp-metal works, in particular, demonstrate his goals of art-as-object. Sculp-metal is an especially fitting material for the exhibition, as it is a naturally silvery gray substance applied much like a thick paint, but it hardens into a solid form. Paint as object, indeed.

It is this emphasis on material and concept that makes Gray so successful as an exhibition. Johns actually had what is sometimes referred to as his “gray period” from the years 1961 to 1966, when he moved from New York City to South Carolina, after severing his ties with artist Robert Rauschenberg. Certainly, there is a melancholy to many of Johns’ pieces from this time—they seem more personal than anything he had done before. However, Gray curators James Rondeau and Douglas Druick have, thankfully, opted to dismantle simplistic notions of a melancholic gray period, opting to showcase the humor and wit that occupied Johns’ canvases.

Johns himself has stated that one of his primary goals in using gray in his works stems from the goal of emptying his art of any emotions colors might elicit. Gray can, however, be associated with sadness, and the personal aspect of this period cannot be ignored altogether. The exhibition acknowledges this, but manages to maintain its emphasis on material and the concepts behind Johns’ work.

A much less successful part of the exhibition is that which displays Johns’ crosshatch paintings, created between 1972 to 1983. Throughout this time Johns did not complete one single artwork entirely in gray, and so this period obviously presented some curatorial difficulties. Its place in the exhibition overall is tenuous, as it is difficult to define the significance of the little gray one can find in these pieces, relative to their number.

Although the most relevant examples of gray in Johns’ oeuvre are found in his early work, a set of new paintings exhibited at the Art Institute, some dated as late as 2005, bring the exhibition full circle. Johns’ Cantenary series, spanning from 1997 to 2003, incorporates the art historical and autobiographical influences found in Johns’ work from the 1980s with abstraction. Bridge, for example, references Picasso with a harlequin pattern and handkerchief, but also has a trompe l’oeil frame that is partially destroyed by harsh abstract brushstrokes in gray, as well as a piece of wood holding a string that is stretched across the canvas. Here Johns maintains his fascination with the canvas as object, but offers multiple layers of styles.

Gray, whether it be in the form of shadows or oil paint, has played significant enough of a role in the career of Jasper Johns to warrant its becoming an exhibition theme. Although there is a danger in creating a monochromatic exhibition (potentially grasping at straws to incorporate works that really have very little significance to a deeper theme), Gray manages to make a case for nearly every piece’s relevance to Johns’s overall oeuvre. More importantly, however, the exhibition allows for a focused study of the media and materials used by Johns, aspects inherently important to his work. 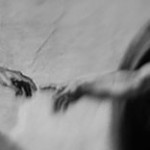 Wake me when it's over