Instead of a table with a bowl of fruit, we find the sneer of a wrestler.

Jessica Tam’s ‘Beyond the Ring’ at LG Space

Walking into Jessica Tam’s exhibition, Beyond the Ring, the viewer is immediately confronted by the image of a big, scary, blond-haired man, gripping a vase of flowers with meat-hook hands.

At first, one is unsure what to make of the image. Flowers, vase. A traditional still life, right? Instead of a table with a bowl of fruit, we find the sneer of a wrestler, staring defensively at the viewer. Yes, a wrestler. Tam’s subject matter is wrestling and its engineered spectacle.

The more one’s eyes adjust to the painting, the more comical and insightful it becomes. The stark contrast between the size of the man and the delicacy of the flowers is hilarious and thought-provoking. In Tam’s artistic statement, she mentions how fans of pro-wrestling must suspend their disbelief while they’re watching the sport. Likewise, she states, viewers of her work are invited to suspend disbelief. The world Tam paints is one where wrestlers have an element of individuality and humanity. They are more than massive brutes wearing leather.

Prior to viewing the show, I couldn’t help but wonder if I would have to know something about wrestling to appreciate Tam’s work. Not at all. The artist confessed she had only recently attended her fi rst professional wrestling match. The wrestlers’ brutish body language and cruel facial expressions correspond perfectly to every expectation you might have of wrestlers… but the settings of the paintings are playful and invite the viewer to revel in this sense of play.

In Tam’s painting Dating Games, a bald wrestler, with a furrowed brow, is depicted in the middle of a cornfield, holding a Whitman’s chocolate sampler. On the right, a masked, blue-skinned girl appears like a sprite in the background. Did she give him the chocolate? Adjacent to Dating Games is Jungle Games, in which the two characters of the former painting wear similar expressions, but are placed in a jungle context. The themes of intimacy, relationships, mischief and games abound, and this works to question the monolithic, uber-masculine tropes of professional wrestling.

In the triptych of paintings, Self Portrait as a Luchador, Tam depicts herself wearing a wrestling mask. The artist takes on the persona of the wrestler by wearing the mask, yet her own personality is clearly represented. The works embody a sense of inquisitiveness and wonder. You can picture Tam gazing at herself in a mirror, wearing the wrestling mask and trying to understand the inner workings of the mind of the wrestler through role playing. 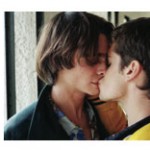