So there was George, and I was all kinds of excited having nailed my George costume. The director of the interview looked over at me and said, “Come on,” so I walked over towards the interview station. 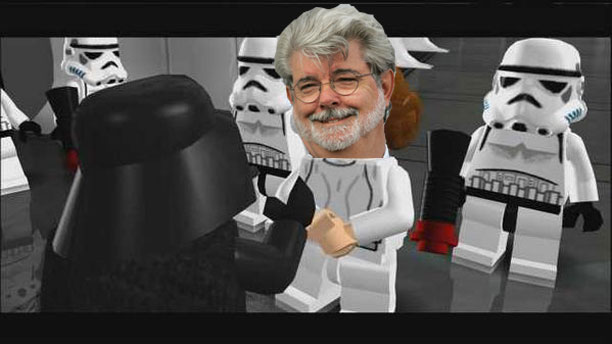 A brief conversation with George Lucas

Three weeks ago I decided I was going to interview George Lucas, so I decided not to get a haircut. Instead, I decided to grow a beard and swoosh my hair back; I started studying up on what George likes to wear. After collecting a hundred pictures of George I concluded that he prefers navy blue sweaters, white button down shirts, blue jeans, and tennis shoes, above all other outfits.

Three weeks passed. My beard had grown in, full and lush. My hair was long and trained to do the swoosh. I had my George clothes laid out for a week. When I went to class that morning, George was getting a tour of the school. Someone said it took two hours to get him out of the Gene Siskel.

That day I had a peanut butter and jelly in the park and visited the library, where I picked up a copy of the Platypus Review (first edition) and scanned it nervously as I waited for the elevator, only to discover an article about a Hungarian man named Georg Lukacs. He was some sort of big time Marx theorist back in the turn of the century, not this past one, but the one before it. So luck be a lady, I had a gift for George, which calmed my nerves.

Back in class we watched a Nam June Paik video from the seventies. At the beginning of the video he said something about how in the future the TV Guide would be as large as the Manhattan telephone directory, assuming that in the future anybody and everybody could broadcast television signals. Of course we all know that, save for for public access and Youtube and it’s many incarnations, only large corporations have the money to win the federally organized bids for television stations.

At five o’clock it was interview time. I was down there in the fancy garden-restaurant underneath the museum. All the doors were closed and the restaurant manager had people running around tables, trying to make the place look better. There were three cameras set up and light boxes and a crew running here and there. A chair was set up comfy and empty, with lots of light on it for George. The chair for me sat between a light box and a big HD camera, and the crew pushed the box and the camera in so that when I sat down I was of squeezed into a sort of uncomfortable fancy technology cave.

So George comes in wearing his navy blue sweater, jeans, and tennis shoes. My shirt was white and his was white with stripes on it. George had a diet coke. People watched George and then they looked at me getting ready to ask him questions, and then they looked back at him, and then back at me. I knew I had already done a good job: the weekend before I was at a Halloween party and some kid said I looked just like George Lucas.

So there was George, and I was all kinds of excited having nailed my George costume. The director of the interview looked over at me and said, “Come on,” so I walked over towards the interview station. From the other side of the restaurant came George and we met halfway, me in my blue sweater and him in his blue sweater and him with his beard and swoosh hair and me with my beard and swoosh hair and he looking surprised at seeing himself and me looking back surprised to have such a long look with George Lucas. In slow motion he held up his empty glass to me and said, “Will you put this on the table?” I took his empty diet coke glass out of his hands and sat it down on the table.

For three weeks I was getting ready for this interview, not knowing that I would only have ten minutes to talk to him. Now, I’m a long-winded person and I knew that he tended to talk too, so my strategy was to just pick one thing to talk about. I took the last sip from my third glass of water and just like I had practiced said, “So George, (a snicker arose from the crowd) in the next ten or five years, where do you think you will find your viewership?” He told me some things I already knew about not getting profit from theater releases and all profit coming from DVD and TV. “But,” I prodded, “in five or ten years how do you think your audience will be experiencing media?” George geared up with a ruffle from his beard and exclaimed that the Internet is undoubtedly the next frontier. I wanted to get into the relationship between media and personal interaction, but before I could get it going George had already gone into a musing on The Big Question: whether or not people are going to pay for media. Sure they can download movies, but why not just watch free YouTube?

He talked about money for a while and then, just as we were really getting to something, I was out of time. George seemed surprised that my time was up. He smiled and I got out of my chair. We shook hands and then I slipped the Georg Lukacs article out from between the pages of my notebook. I unfolded the article and gave it to him and he looked up, a little confused. I pointed at the picture of Marxist demigod Georg Lukacs, leaned down real close to his face and said, “Look it’s you!” He looked at it and I walked away. He looked up at me again, and I said, “something to read on the bus?”