Know where to go to get the best audio

We have all been there: staring at a blank page, checking email, rechecking email, doing ‘research’ on myspace. How can we, like the great idealists behind public television, help turn the internet away from a format for advertising and into a resource for the curious?

In the last decade years many audio archives have been going on-line, searchable to anyone who wants to spend some time with interviews, readings, or noise music.

Here are four excellent literary audio archives. While these sites may focus on literature, fear not, visual artists: kcrw.org , archive.org, and ubu.com all feature a range of excellent resources for the artist, filmmaker, musician, and procrastinator.

For over a decade Michael Silverblatt (called by Norman Mailer, “the best reader in America”) has hosted Bookworm on KCRW, a public radio station out of Santa Monica that also features Art Talk and Morning Becomes Eclectic, and is one of the best-kept secrets on the web.

In the last few years KCRW has posted a web archive of Bookworm shows featuring interviews with established poets and writers like Susan Sontag, Salmon Rushdie, John Barth as well as emergent writers such as Carole Maso, Anne Carson, David Means, and recently, Miranda July and Nathan Englander. Before interviewing an author, Silverblatt likes to closely read everything that author has written, from things published in obscure journals to a new release and the result is an erudite and compelling interview that in many cases gets to the core of writing. Bookworm is for anyone interested in the complexities of contemporary literature.

Highlights: Interview with Salmon Rushdie (The Ground Beneath Her Feet) filled with nerdy laughter. Don Dellilo on Underworld and Cosmopolis. Harry Mathews on the Oulipo. Ron Padgett on Berrigan, Brainard and the OK gang. Anne Carson on Classical Literature, a rare interview with the late W.G. Sebald (Austerlitz) on history, memory and the holocaust. Ben Marcus and Lydia Davis on the sentence and the nature of story.

Probably best known for their set of videotapes housed in libraries around the country and for an uncanny ability to showcase amazing writing with their Lannan Award, they also have an audio archive of interviews. In their words, “Lannan has always made audio recordings of and often videotaped its public program events. These events may belong to any of the Lannan program areas: Art, Cultural Freedom, Indigenous Communities, Literary, Readings and Conversations, or Residency.”

Lannan features readings by each featured writer in addition to the enticing format of writers interviewing writers. The unique insight of one writer into the work of another is always an intriguing one, and it makes this archive one well worth exploring.

The Naropa Audio Collection on Archive.org

One of the most interesting archives on the web has to be archive.org. It began as a web site devoted to collecting and making accessible web content that is no longer available, but has since grown to house a number of movies, images, audio and web pages from thousands of sources and has recently become an official library.

Among the archives, the Naropa Audio Archive collection really stands out. The writing school at Naropa was founded in 1974 by Allen Ginsberg, Anne Waldman, and Diane di Prima and in addition to its full-time faculty has, for over 30 years, brought in hundreds of some of the most important names in poetry, prose, and everything in between for the Summer Writing Program. Audio includes classes, workshops, lectures, and less formal conversations between students and writers.

What is most impressive about the audio collection is its range: moving easily from the Beat roots to the New York School, to L=A=N=G=U=A=G=E, to New Narrative, and everything in between. The tragedy of the collection maybe how little of it has actually been digitized and made available to the public, something that was at the heart of the Audio Archive Project at its inception.

No sympathy for abysmal Fridays 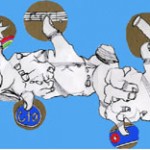