Cultural insensitivity, ignorance and a false sense of entitlement

As a graduate student in the dormitory I expected to feel a bit out of place. I understood that my age, race, life and educational experience could present some challenges as it relates to building community; yet, I have attempted to be optimistic. I have minimized my annoyance at the noise levels, dirt, and obscenities in the hallway. More difficult to ignore was the constant vandalism on bulletin boards or flyers in the hallway. While it bothered me that my “dormmates” would be so inconsiderate and immature I dismissed it as a convoluted sense of entitlement and a severe misunderstanding of artistic freedom.

Imagine my worry when a bulletin board with the word Ghana surrounded by Adinkra symbols was put up on my floor. Adrinka Symbols are traditionally used in fabrics for significant ceremonies such as funerals or weddings in this West African country. Even without that specific knowledge, the symbols accompanied by the name of their country of origin signify an importance even the feeblest of minds can grasp. I hoped it would not meet the fate of its predecessors but angrily, and within days, I encountered it had.

Ghana was reduced to a disease, a symbol of filth that is a representation of the racism motivating decades upon decades of colonialism and oppression. Contrary to the culprit’s opinion there are some things that are sacred. And the Diaspora of Africa has endured enough disregard and disrespect at the hands of those who feel they have the “right” to do so. Neither juvenile vandalism (not to be confused with graffiti art) nor “high art” nor any art in between, is excluded from espousing or representing hate-filled ideas, and this gesture is a symbol of the internalization of just that. This ignorant action from a privileged, undereducated, prejudiced, and careless individual is an example of the work that society, art as an educational medium, and this school specifically has yet to do. I am offended and outraged that I live in a dorm, on this campus, with at least one individual of this kind. One is too many and I am not so naïve to believe that this one exists alone.

As the Adinkra symbol Mpatapo (one of those displayed and subsequently disrespected) urges, there must be peacemaking after strife. This incident is surely not the worst racial hatred I have experienced, but when it occurs in my home (which the dormitory is) it affects me significantly. My peace is made in part because I refuse to be a silent passerby to the ignorance I experience on multiple levels in my dorm and at SAIC. My peace comes from hoping others will not tolerate the silencing of their own experiences either. 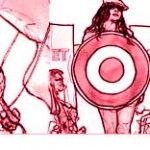 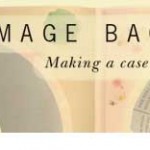 Bringing image back to text