In the spirit of SAIC’s recent symposium on the state of art criticism, it seems appropriate to take a look at James Elkins book, What Happened to Art Criticism? and at writing about art in general. 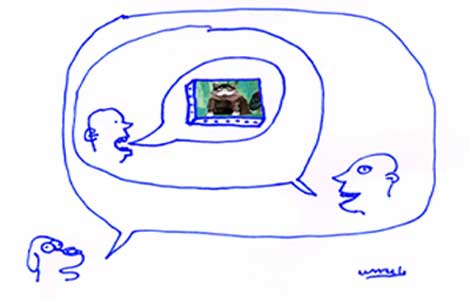 In the spirit of SAIC’s recent symposium on the state of art criticism, it seems appropriate to take a look at James Elkins book, What Happened to Art Criticism? and at writing about art in general.

WHAC? is problematic because it doesn’t answer the question posed by its title. It sets out to do so but gets lost along the way. Elkins seems more invested in the meandering discussion and touching on topics here and there. But that is unsatisfying for a reader drawn in by such a direct title.

Elkins also loves to compartmentalize and sub-compartmentalize every idea and thought he is discussing. This becomes the main device that leads to the downfall of WHAC? . Elkins starts out by categorizing and naming types of criticism. He immediately trips up by calling them the “Seven Hydra Heads.” How are types of art criticism evil? In introducing a false analogy, which he admits as much to, he sets himself up for trouble.

Elkins then continues the “seven types” structure for his “Seven Unworkable Cures.” Now there is a false correlation between the seven heads of evil art criticism, and the seven cures. No matter how you try to disconnect the two categories, in the mind of the reader they are still connected.

WHAC? is reads quickly and leads one towards all sorts of thoughts and possibilities. Which is really where its value lies. Elkins provokes readers to think about art criticism, question it, and ponder its purposes. That is fine, but then you pretty much end up where you start. Perhaps the journey was interesting, or just confusing. But that has to be the value of it. Trying to nail down Elkins’ position is impossible. Trying to analyze the book only leads to more and more variables and uncertainties. This is because no conclusion is reached by the author.

The only time that “what happened to art criticism” is addressed is on the front cover of the book. After that Elkins looks at types of art criticism, promises more in depth discussion and then ends up saying, “so I don’t think it necessarily is a good idea to reform criticism…” Why wasn’t that the title of the book- Does Art Criticism Need to Change?

The most frustrating let down is that, after dismissing others solutions and approaches to art criticism, Elkins offers none himself. He talks about things he likes, and things he’d like to see happen.

WHAC? goes most off track when Elkins dismisses cultural critique. He cites an obscure example in the writing of a drunken art party-er, Janis Demkiw:

Some fuck had jumped the curb and slammed right into the [Henry] Moore and Her Majesty was not even dented…(Incidentally, we found out later that AGO [Art Gallery of Ontario] got footage of the whole thing on their security camera. Now THAT is fucking Art.)

This is in no way a good representative of “cultural critique.” Cultural critique takes into account not only art, but the arts and the society and culture it is in. It looks at contemporaneous issues and takes a wholistic world-view that a compartmentalized one cannot comprehend.

It is looking at art in the context of culture today where one finds not only what has happened to art criticism, but also how it operates, what it is used for and how it can evolve and expand into something better.

Descriptive art criticism is the most pervasive, most read and the most problematic. Indeed Elkins’ faux conclusion is really just a lead in to a bigger question: “So I don’t think it necessarily is a good idea to reform criticism: what counts is trying to understand the flight from judgment and the attraction of description.” Descriptive art criticism is a problem because it only describes the art on view and says nothing else. When you are talking about a work of art, it is important to describe it to the reader, so they know what you are talking about. But why stop there? I feel that if James Elkins was a practicing art critic he might have a better understanding. Coming to the discussion as an objective outsider to dissect a corpse can be good. But it can also limit one’s perspective.

One main reason that criticism is so flat is space and word count. Most of the time a writer has about 70 to a 100 words to write about a show. It is virtually impossible to mount any sort of worthwhile discussion in that amount of space. Why is space so small? Art magazines are like any other. There are lots of topics to cover, lots of shows to review. Readers go for small blurbs about several things, not a big analysis of one thing. Space goes to advertisers because that is what pays for the magazine to come into existence in the first place. There are also design concerns. Text doesn’t get printed to every margin in a 9-point font.

Why else would criticism be just descriptive? Well, what is the mission of the publication? Art magazines are trade magazines and general interest periodicals are just that. People don’t pick up TimeOut for a serious analysis or to see theories about art evolve. They pick it up to see what is cool. Do you read the reviews in TimeOut , or the Reader ? Not only are they not negative, they aren’t positive either. The reviews are like restaurant reviews. It’s like talking about food. In fact, of all the reviews out there, art reviews are the flattest. In that they say nothing if the subject being reviewed is good or not, only factual information about it. Description and background are only the first two steps. That is where you lay groundwork to mount your criticism. So the majority of published writing about art is journalistic, not criticism. And chances are, a potential reader wants to know just a few things about the art beyond where and when they can see it. Mainly, what is it about. “Explain it to me,” they say. So a review says “so-and-so’s show is up at ‘blank’ gallery. So-and-so paints dogs. They grew up with dogs and once they almost drowned but the family dog saved them. And that is what so-and-so’s art is all about.”

The primary reason for writing about art in today’s cultural climate is the art market. This is not to say people don’t care about art, or people don’t write about art for other reasons. But this is why articles about art are published. It is entertainment. It is a market. Art galleries and art museums fit into a category that includes music, movies, theater, and museums. Even art magazines follow this lead. Artforum talks about movies and music along with “Art,” and Modern Painters talks about much more than just modernist painting.

Lori Waxman, in the announcement for her 60 words/min Art Critic project pretty much sums up what art criticism is about today:

The short review is at once a challenge, an insult, a record, and a piece of advertising. Its purpose is debatable and arguably quite different for the various parties involved: the writer gets a tear sheet, a couple of bucks, and some editorial gratification; the reader, in the best case scenario, gets a succinct, opinionated description of a body of work they probably did not see in person; and the artist gets published recognition and an entry for their bibliography.

So What if you don’t want your writing to serve these aims, or you don’t want to read writing like this? Not all criticism in all the publications is always vapid and lifeless. There are some mainstream writers that have good things to say. This isn’t to say these writers are always right, all the time. But the following writers offer good ideas, and good prose, and at the very least good read that stands up and says something: Peter Scheldahl ( The New Yorker ) Jerry Saltz ( Village Voice , artnet.com ) and Robert Storr. Also, an alternative publication which has made its own name is Coagula Art Journal . It is witty, clever, ruthless and completely out of left field which makes it such a valuable thing to have. Locally, in Chicago, who’s good to read? Me, everyone else is rubbish.